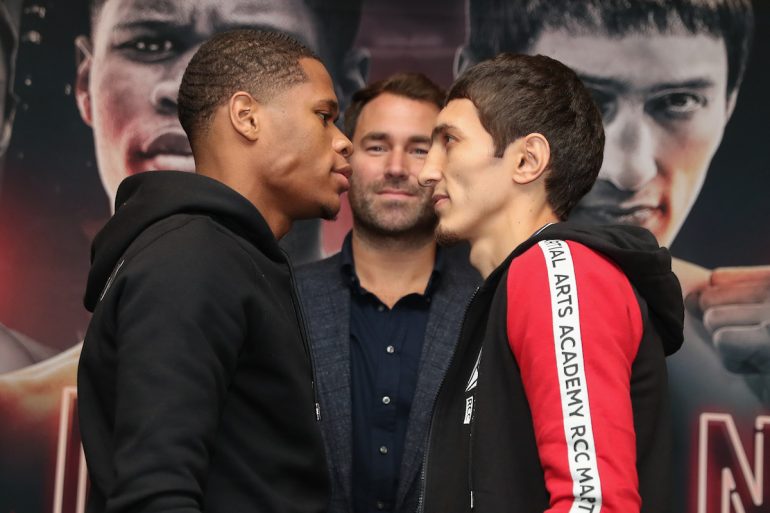 Word around town is that the ladies, Heather Hardy, and Amanda Serrano, who’ll engage in a featherweight title fight Friday night at the Madison Square Garden Hulu Theater, are wearing the pants when it comes to selling tickets for the event.

On Wednesday, a press conference to bang the drums for the Matchroom Boxing card, portions of which will screen on DAZN, was held at the Dream Hotel, a swanky joint in the Chelsea section of Manhattan.

Devin Haney, who has a beefier entourage than he did last year, sounded composed and humble but supremely confident, as he promised to get the win versus Zaur Abdullaev…and also that he’d save something for WBC 135 pound champ Vasiliy Lomachenko. The winner will get to fight Lomachenko, in theory, as the WBC will have their interim belt at stake.

He didn’t seem even slightly miffed to share spotlight with Hardy and Serrano, two New Yorkers, who will sell 30 percent or more of the tickets sold for the card.

Lou DiBella stole a portion of the show when he made a plea for better treatment (read: beefier paydays) for the ladies. Time to kick the door down, and get paydays which will make it so the Hardys and Alicia Napoleons and such don’t have to split their time training clients on the side so they can make rent.

Haney’s mic session drew some solid buzz on-site: “This is a huge opportunity. I’m happy to be here. Friday night I look to put on a great performance. I’m a totally different fighter, totally different thing. This will put me one step closer to where I want to be. [Abdullaev’s manager Egis Klimas], I’m going to show you a little sample of what I’ll do to Lomachenko after I beat Abdullaev. I know Zaur will put up a great fight, but I’m ready. I had a great training camp, and come Friday night I’ll show the world who Devin Haney is, and I’m ready for the top dog,” said the 22-0 (14 knockouts) Haney.

Abdullaev (11-0, 7 KOs) looked almost shy; his people said they think it could go like this, that Abdullaev could be like Dmitriy Pirog, when he downed the much hyped Danny Jacobs in 2010. “We had a very good preparation for this fight. We had two months to train very hard. We’re ready to go. Many people are underestimating me, but come Friday we will show what we got,” the 25 year old Russian said.

Hearn, by the way, told me that no doubt, Abdullaev is Haney’s toughest test, on paper, to this point.

Hearn spoke on the Las Vegas resident: “He was saying he’s no longer a prospect, and I think he’s right, it’s impossible to say he’s one of the best prospects in boxing because he’s about to fight for the interim world title in a very tough fight against undefeated Russian fighter in Zaur Abdullaev with the winner being the mandatory challenger for Vasyl Lomachenko.” 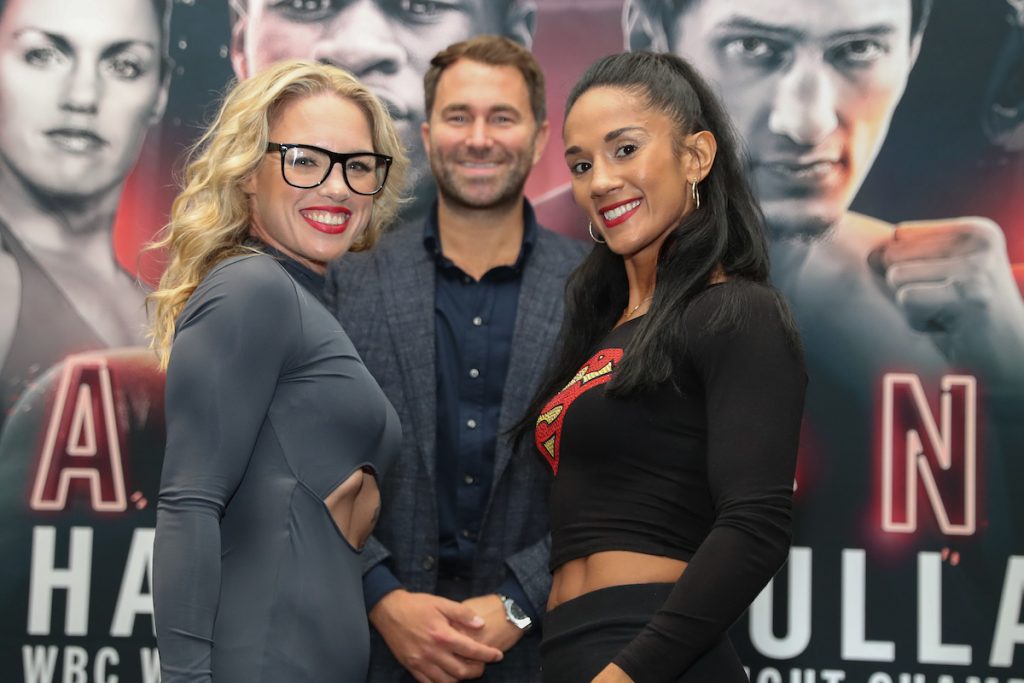 Joseph Markowski, DAZN EVP, North America took to the mic, and said that DAZN is on a solid run:

“We’re about to embark on a tremendous four-month period for DAZN here in the United States. The schedule we’re about to put together, and we have not yet fully announced our schedule, is already one of the strongest in the history of the sport of boxing. It would be very easy to stand here today and look past this weekend and look at some of the names, fighters, and matchups to come in the next few weeks and months. The likes of GGG, the likes of Ruiz vs. AJ, and very shortly we will make an announcement on Canelo Alvarez’s next fight.” Yes, no secret there, a step up to 175, and Sergey Kovalev, will be announced any minute. “Huge fights, huge names, and a packed schedule starting this weekend. We don’t want to look past this weekend, for us it’s the start of the season of fight sports. ”

Hardy had a brief but impactful time at the mic. “I’ve become known as the girl talking about the pay and equality. I just want to say it’s never a reflection of how grateful I am to be here. Crying to pictures over at MSG with my mom, thinking we made it. I’m thankful for Amanda choosing me, she’s the best boxer in the world right now. I’m ready, I’m the toughest girl in boxing.” She made sure to give a shoutout to Dibella, who once again proved that at heart, he’s a feminist.

DAZN coverage of the preliminary bouts will begin at 7 p.m. ET, with the main card starting at 9 p.m. ET.