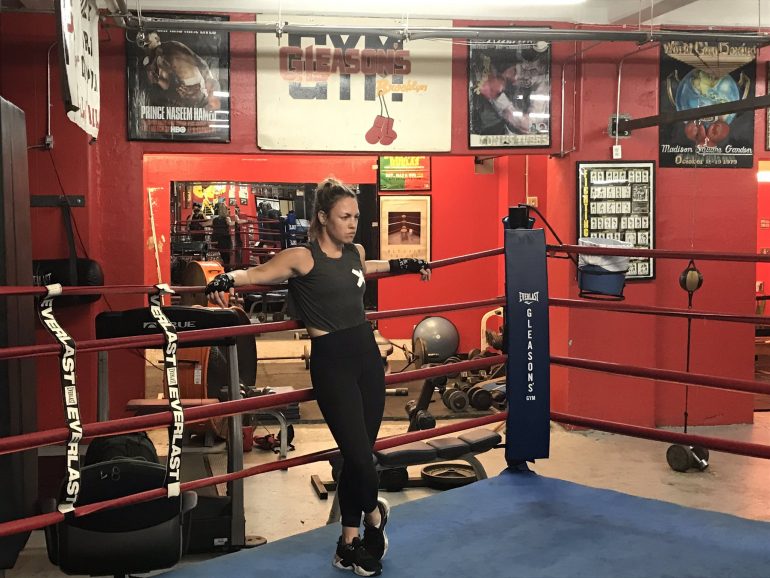 Heather Hardy has continued to work her day job as a personal trainer, even as she prepares for her world title defense against Amanda Serrano. Photo by Ryan Songalia
10
Sep
by Ryan Songalia

NEW YORK — After two hours of training clients, Heather Hardy begins the meticulous process of wrapping her own hands, knuckle by knuckle with the black cloth that protects her fists. This will be a shorter “learning” session to correct her technique before a more intense workout later in the day.

Though she’s in the home stretch of preparations for her September 13 fight at The Theater at Madison Square Garden against Amanda Serrano, she can’t get away from her day job.

“This isn’t my full time job,” says Hardy, 37, after cooling down at Gleason’s Gym in the DUMBO section of Brooklyn, a couple of weeks ago.

She’s the World Boxing Organization featherweight champion with an undefeated record of 22-0 with four wins by knockout, but she’s also a single mother of a 15-year-old whom she has to start banking away college tuition money for. That’s why she continues to train personal clients at the historic gym, even with the stakes as high as ever.

“If I win this fight I’ll get an even bigger paycheck; if I lose this fight who knows where I’ll end up?,” added Hardy, whose fight will be part of the four-bout broadcast this Friday on DAZN, beginning at 9 p.m.

“My whole career is riding on this fight and I have to get up at 6 a.m. and run to the gym to make extra money because I’m not making enough for it to be sustainable. I can’t focus 100 percent.”

Devon Cormack, who has trained her since she was a kick boxer before she switched to hands only combat, says most male champions leave town for training camp so they can focus only on their fight. For Hardy, that just isn’t an option.

“I don’t know if it makes her tougher, but I know that it’s not fair,” said Cormack, 61, of Hardy needing to work while also in training.

Hardy has been on the front lines of the fight for pay equality in boxing, pointing out that women typically make a fraction of what their male counterparts make. She says she is making a career high payday to face Serrano (36-1-1, 27 KOs), a southpaw who has won world titles in a women’s record seven weight classes, but her purse for the fight doesn’t eclipse six figures.

Hardy dismisses the argument that the free market is why women are paid much less.

“Well you don’t promote us, you don’t put us on shows, you don’t give us a chance,” said Hardy, pointing to Katie Taylor and Claressa Shields, who have become major stars through the exposure given to them when the Summer Olympics debuted women’s boxing as a sport beginning in 2012. 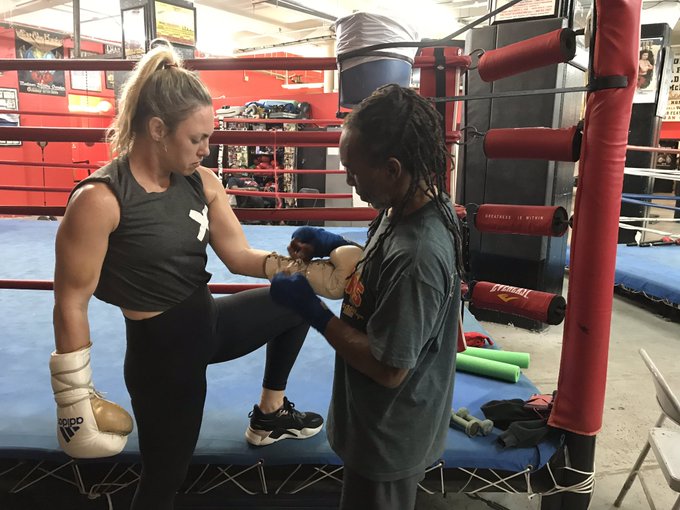 According to the 2017 U.S. Census Bureau, a woman who works full time in America earns on average 80.7 cents to each dollar that a man makes. Lou DiBella, who promotes both Hardy and Serrano, says the divide is far greater in boxing.

“Similarly situated women and similarly situated men, I would say 15 to 20 cents on the dollar,” said DiBella. DiBella, who is the leading promoter of women’s boxing in the country, says there just isn’t the sustained support from the networks that broadcast boxing to close the pay gap.

“DAZN won’t sell me a women’s show,” said DiBella, adding that Showtime, which has aired most of Shields’ fights, had declined to televise Hardy’s fights. Alicia Napoleon (12-1, 7 KOs), whom he also promotes, recently told a similar story in a Newsday documentary about needing to continue working as a personal trainer, despite holding the WBA super middleweight title.

“Alicia Napoleon is good looking, incredibly well spoken and gifted she has beaten many of the same fighters that Claressa has. She looks like Wonder Woman, she’s the total package, but I can’t get a date for her on any network other than UFC Fight Pass,” said DiBella, pointing out that Fight Pass, a mixed martial arts platform, has a limited budget for boxing.

Hardy says she has sold $25,000 worth of tickets for the fight, and expects Serrano, another New York-based fighter, to also sell a significant number of tickets. The fight, which is scheduled for the women’s standard distance of ten, two minute rounds, is the co-featured bout on the bill, underneath the main event featuring Devin Haney, a San Francisco native now residing in Las Vegas, against Zaur Abdullaev, a Russian making his U.S. debut.

DiBella believes that virtually all of the fans inside the venue will be there primarily to see the women’s championship fight.

“If they were two men fighting in the same significance of a fight…they’d be probably making a million dollars each,” said DiBella. “They’re not making [$100,000] each.”

To find bigger paychecks and expand her fanbase, Hardy set aside boxing, which she compares to a “bad boyfriend”, and made the transition to MMA, the sport she calls “the boyfriend who has a house, a pension, went to college, and speaks well and your mom loves him,” a generous description for the sport where, during one fight, a kick to the face left her with a broken nose and a bloodied face that resembled a wound in a slasher film.

Hardy fought four times for Bellator MMA between 2017-2019, winning two and losing two. In MMA, female fighters have proven to be significant draws, with Ronda Rousey in a tie for the biggest disclosed payday ($3 million) for any UFC fight.

Still, the allure of boxing drew her back, and she finally won her world title with a unanimous decision over Shelly Vincent in a fight that was featured on HBO (albeit in its dying days of boxing coverage).

“You go back to that other bum,” said Hardy, about returning to boxing. “I love boxing, but MMA took me a lot more places and did a lot more for me.”

A win over Serrano would likely lead to a bigger fight – and paycheck – against Taylor, the undisputed lightweight champion from Ireland who now lives and trains in Connecticut and has been building her own fanbase in New York on Matchroom Boxing’s cards.

Though Hardy admits Serrano was “beating the shit out of me” when they sparred seven years ago, she’s confident that Serrano knows she is a much better fighter now.

“Ain’t no one with two hands that can scare me. Not a man, not a woman. If I can take that walk to the [MMA] cage and go, ‘I don’t know how to wrestle, I’m really not that good at kickboxing, but I think I can beat this girl,’ and I did it 50 percent of the time, that takes a lot of balls,” said Hardy.

“People say ‘what do you think you have going into this fight?’ I’ve got more balls than any girl that I know, and most men that I know.”