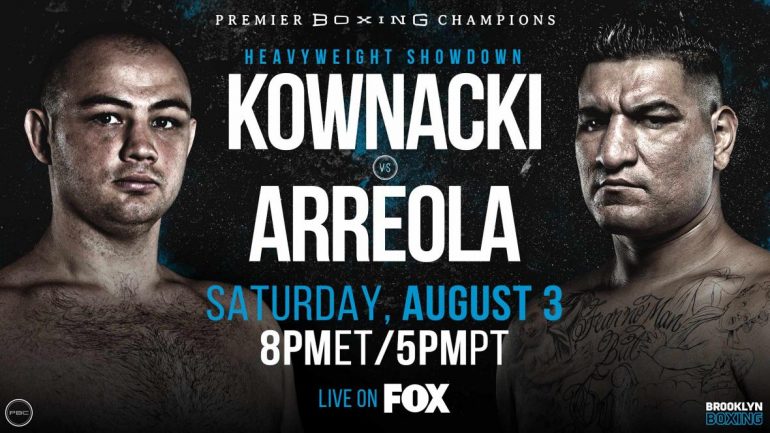 Undefeated heavyweight Adam Kownacki is this close to his first fight as a featured headliner, as he will glove up against Chris Arreola on Saturday evening, at Barclays Center, in Brooklyn. The tango will run on free FOX, for the record.

Right before the Thursday press conference, Ray Mancini said Kownacki vs. Arreola could very well be a “Fight of the Year”-type tango.

They rapped and then the presser played out…

First Kownacki chatted with Heidi Androl. He said he’s pumped to fight and also, more importantly, jazzed to see his son, baby boy AK, who is due August 29. He was asked about what could come next, if he beats Arreola. He’d welcome a fight with IBF/WBA/WBO titleholder Andy Ruiz, he said, but first things first…

He said he’s enjoyed working with perfectionist Joe Goossen and wants to capitalize on any mistakes Kownacki makes. “I love that he smiles when he fights because I do too,” he said.

Ray Flores emceed the presser and he intro-ed Michael Spinks to the assembled press. He asked Wale Omotoso and Curtis Stevens, aka “The Cerebral Assassin,” to stare down with Wale.

Next, Flores ushered Jean Pascal to the stage. Marcus Browne, from Staten Island, came to check out the Canadian hitter. They don’t seem to care for each other…

Then the heavyweights got the spotlight. Three-time title challenger Arreola strode to the stage. He was dressed down, in a white t-shirt while the Pole Kownacki sported a sharp, summery blue blazer. 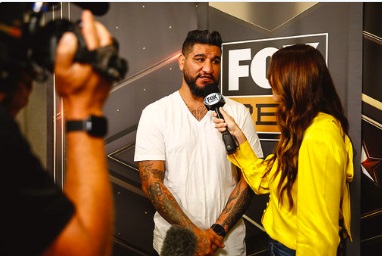 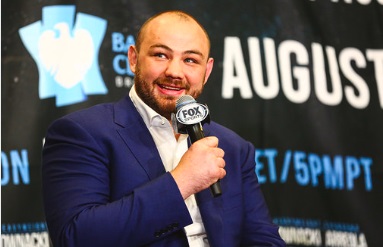 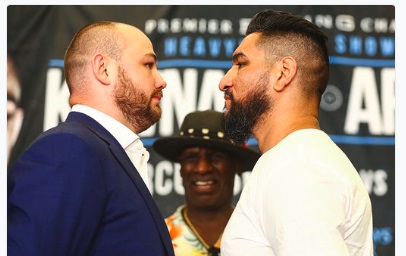 Born in Poland, raised in Brooklyn and living on Long Island, the baby-faced boxer and Arreola looked at each other but without fake bluster or hardness. Both are happy warriors.

Saturday, it will be the ninth time Kownacki gloves up at Barclays, for the record.

Androl then took over and presided. She noted that tempers were flaring; maybe Browne and Pascal had been jawing…

Stevens told Androl he moved to 154 pounds because 160 is crowded with his pals. Wale said that he came up from 147 while Stevens is coming down. We shall see how that plays out, he said.

Browne then said he recalls being a teen and seeing Stevens and company headlining at the Hammerstein. Then time passes…

“I promise I will beat your ass,” Browne answered. Pascal then brought out a ladies wig and busted on Browne, who has had legal problems with repeated visits to his ex, who called the cops on him.

“If I wear this are you gonna promise the world that you’re gonna knock me out, like you used to do?” he asked.

Androl quickly steered toward the heavyweights.

Kownacki said he was “very excited” to be headlining. Arreola then was asked if he would indeed retire if he doesn’t win. “I’m carefree, man. I have no stress in my life. If I lose I have no problem walking away,” but he said he’s not thinking he will take the L.

Kownacki said he had a 12-week camp, did some weights, got stronger and, as always, got lots of sparring in. And will Arreola’s experience really benefit him? We will see, Arreola said. “I can’t wait to get it over with, to tell you the truth, and get it over with because I love punching people in the face,” he said, laughing.

Is it hard to not hate the other guy? “Once we in the ring, we ain’t friends no more,” Arreola said. He hopes everyone leaves healthy enough but he wants to put on a show.

He said Kownacki looks like a violent puncher and likes how he smiles when he fights.

Arreola said you should watch this fight and record it – because you will want to re-watch it.

My three cents: I am tipping this one to be an old-school-style rumble. Defense won’t be front and center. Kownacki has won via stoppage in rounds two, four and six in his last three early finishes, while Arreola, has been stopped three times and lasted eight rounds versus Deontay Wilder. Could the Pole stop him earlier? That would be an achievement and not out of the realm of possibility, because Kownacki might make Arreola work harder with heavier volume than Wilder did. And no one should count Arreola out…Sometimes those whose backs are against the wall explode in the opposite direction. This will be a busy and fan-friendly scrap.