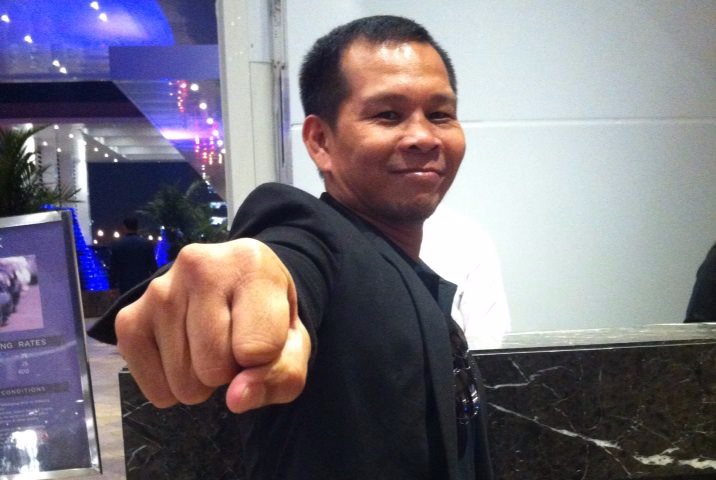 It has been a little over a year since Gerry Penalosa hung up his gloves for good, retiring from professional boxing with a record of 55-8-2 (37 knockouts) following a 21-year-career. He misses the bright lights sometimes, he admits, but says that life after boxing has afforded him ample time for his other passions in life.

“I’m happy even if I’m not in the ring because I’m with my family 24 hours a day,” said Penalosa, a former super flyweight and bantamweight champion. “The good thing is that I’m content with what I’ve achieved.”

Penalosa, now 39, is on the short list of the greatest fighters to come out of the Philippines. After winning his first world title in 1997 with a split-decision of Hiroshi Kawashima, Penalosa proceeded to make three successful defenses before losing the title by a close split-decision to In-Joo Cho in his opponent’s hometown in South Korea the following year.

It would be nine long years, when Penalosa came from behind to knock Jhonny Gonzalez out with one body punch, before Penalosa would once again raise a championship belt above his head. In addition, Penalosa also faced top fighters Juan Manuel Lopez, Eric Morel, Daniel Ponce De Leon and Masamori Tokuyama.

No longer an active fighter, Penalosa has switched his focus to the business side of the sport. The San Carlos City, Philippines native owns a chain of boxing gyms throughout the Metro Manila region and is the president of GerryPens Promotions, which he has used to move the careers of his nephew Dodie Boy Penalosa Jr., as well as Michael Farenas.

Dodie Boy Jr., who is the son of the former light-flyweight and flyweight champion Dodie Boy Sr., is 7-0 (7 KO) as a professional and will face Thailand’s Superjames Singmanasak (1-4) this Saturday at the Recom Dome in Caloocan City, Philippines. The bout will be televised by Filipino television station GMA 7.

For G. Penalosa, he’s taking the good with the bad of working on the other side of the sport.

“I was so pampered when I was a fighter. Now, I’m the one pampering the fighters,” said Penalosa with a laugh.

Best Overall: Jhonny Gonzalez – “He’s tall, strong and fast. I didn’t like his style. I just happened to win that fight because I practiced hard and punished myself in the gym.

“Before the fight, when Golden Boy told my manager Billy Keane that I will fight him next, I know it would be a hard fight. I put it in my mind that he’s a strong, hard puncher so I knew I needed to prepare for this fight because my life was in danger. But when the fight was close, I gained more confidence because I was ready. I looked at him at the weigh-in and he looked drained and thin. I said, ‘Oh, I think this is my time because he’s not 100% mentally and physically. In the beginning of the rounds, I told myself that (being outworked) was just temporary, later on I will kill him.”

Best Puncher: Jhonny Gonzalez – “When he hit me, I really felt it. I really appreciated his power.”

Best Defense: In-Joo Cho – “It was hard to hit him. he runs and he’s tall for the weight at super flyweight. He was like 5-8.”

“I didn’t like that style, he’s tall and I’m short. It’s hard for me. I was fighting in his hometown so what he did is just run and run without punching and he got all the judges to give it to him.”

Best Chin: Hiroshi Kawashima – “Aside from his good chin, he was very talented. He really is a strategic boxer, one of the best I’d seen. It just happened that I won the fight because I fought the right fight. I trained hard for that fight because I was very very hungry. No one could have beat me that night. I was a kid and being a champion was my ambition in life. I couldn’t afford to lose it.”

Smartest/Strongest: Juan Manuel Lopez – “He’s too big for me and he knows that if he uses his strength, he would wear me down because he’s bigger than me. He had a good plan and it just wasn’t our night.”