Jerry Forrest: A B-side with an A-side attitude 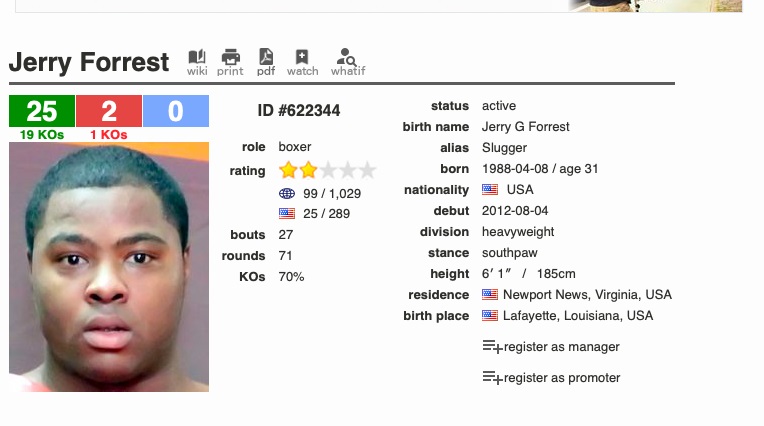 The man knows he’s the B-side, that he isn’t being brought to Tacoma, Washington, to be the A-side, to get the W and continue his upward climb.

On July 12, heavyweight Jerry Forrest (25-2, 19 knockouts), 31, will fight Jermaine Franklin (18-0, 13 KOs), on “ShoBox.” The Louisiana-born hitter joined us on Everlast’s “Talkbox” podcast and his eyes seem pretty wide open regarding this scrap.

However he sounded pretty optimistic, as we discussed this tango, which will unfold on Showtime.

“He’s on the A-side, of course…I’m on the B side. There’s not much of a difference, to be honest with you,” Forrest said. “All champions have been on the B-side at one time, so I’m not really worried about that. I know it’s gonna be a good fight. (Franklin)’s a busy guy, so we’ll see how it goes, from that aspect. Yeah, I’m supposed to lose but his promotional company and everybody on his team knows it’s a huge risk for him, more so than me, in the sense of he’s a prospect.”

We asked Franklin his assessment of the baby-faced Forrest:

“He is big puncher who brings a lot of energy. He likes to brawl and come straight forward,” Franklin told us. “His strength is his left hook. He throws it a lot and, from what I can see, his footwork is his weakness. I’m going to win. If the knockout happens then so be it. And what are the stakes? The stakes are high. I’m viewing this fight as a championship fight. I plan on bringing everything I have to the ring. A win Friday would, in my opinion, line me up with hopefully a major opponent in the next three months and, by the middle of 2020, a title shot. I’m ready. I’m the best!”

Now residing in Virginia, Forrest has been on a sweet streak. After debuting in 2012, in his eighth fight, a year later, he was stopped by Gerald Washington. Next time out, he met then 4-0 Michael Hunter and dropped a unanimous decision. He’s won every bout since…No, Forrest has not been in with A-side or even B-grade boxers all the way through. But he said, he’s been sparring with championship-level boxers and so he is more seasoned than we’d think. Forrest last fought in April and bested then-19-2 Joshua Tufte. That’s probably his best win.

Forrest is a lefty, has 19 KOs and he’s crafty; I think. He showed that when he referenced his top-tier sparring but he wanted to keep his partners’ IDs mysterious. A funny story: Forrest told us that, last week, he went to the famed and fabled Gleason’s Gym, saw Otto Wallin, also on that ShoBox card (he’s scheduled to fight BJ Flores) and was hoping to maybe get work in with Wallin.

Forrest also showed a good sense of humor, as he chuckled about his baby-faced pic on BoxRec.com.

He snapped into serious mode when asked for a prediction. “I think I’ll stop him in the later rounds or just outbox him completely,” Forrest asserted.

And maybe – just maybe – you want to tuck this tidbit away, if you are thinking we might see an upset special on July 12. Forrest is nicknamed “Slugger.” No, not for his power-punching ability. At birth, Jerry was on death’s door, as his mother had a blood infection passed on to him, he said. “I was supposed to die, when I was initially born. They told my mother, grandmother, the whole family, ‘Get the funeral arrangements ready. He’s probably not going to make it through the night,'” Forrest recalled. Grandma came to the newborn and said, ‘You gotta be a slugger; you gotta fight. If you die, my daughter is gonna wanna die. I can’t have that. You have to fight. You gotta be a slugger. You gotta stick it out.’ And I opened my eyes for the first time. I started to respond, almost instantly. From there, that name stuck with me. It’s kinda like destiny; I feel.”