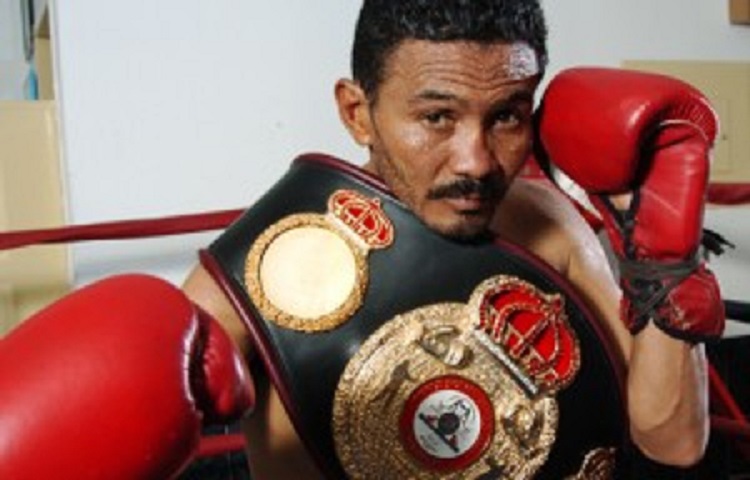 Leo Gamez is the only South American boxer to win world titles in four weight classes. The underrated Venezuelan wasn’t always the most consistent of boxers but he made up for that with fierce determination. He won world titles in three different decades at 105, 108, 112 and 115, all away from home, during a 20-year professional career.

Gamez was born in San Juan de Los Morros, in central Venezuela on August 8, 1963. He was from a large family of 13 children.

“My life as a child was very hard because we lived as poor people,” Gamez told The Ring. “We were nine boys and four girls, plus my dad and mom. We were very poor. The only member of the family that used to work was my dad. Because we lived in poverty, I decided to help by cleaning shoes and selling empanadas.”

When he was 12, he started boxing after a man came to San Juan de Los Morros and put gloves on some of the boys and let them fight. When it came to Gamez, he gave it a go and wound being a love affair.”His name was Jose Bolivar and he was called ‘Cheo,’” Gamez reminisced. “One day he told me, ‘Boy, do you want to put on your gloves?’ So, I put on my gloves with another boy there and we started to fight. I beat him hard and put him on his arse. The next day, I went again and again they put the gloves on me with another boy. I broke his nose. After that, this man asked me if I wanted to box and I told him, ‘Anytime, just say when.’ From that moment, everything started.”

“Torito” enjoyed a good amateur career, winning two national titles and representing his country on the national team. As an amateur, he had a record of 69-7Gamez turned professional in February 1985, winning his first 16 fights, all in Venezuela, claiming the national junior flyweight title before traveling to Busan, South Korea, in January 1988 to face Bong-Jun Kim for the vacant WBA strawweight belt. At the conclusion, Gamez was awarded a razor-thin unanimous decision by a single point on all three scorecards. The win was hugely significant for him.

He successfully defended his title three months later with a third round stoppage in Japan. A broken arm forced him to vacate his throne and sidelined him for an extended period of time.

After an 18-month absence, Gamez returned, won two comeback fights at home and then took on long-reigning WBA junior flyweight titlist Myung Woo Yuh, in Seoul, South Korea, in April 1990. Yuh edged matters to retain his title by controversial split decision. The two were mandated to meet in a rematch that fall. This time the future Hall-of-Famer won a more straightforward decision.

The frustrated challenger was inactive for 11 months. When he returned, he came back as a flyweight and fought Yong Kang Kim for the WBA strap in South Korea, dropping a unanimous decision.

He went on to retain his title three times, in Panama, and twice in Thailand, before being unseated by former strawweight titleholder Hi-Yong Kim in South Korea, by hard fought unanimous decision, in February 1995.

Two wins at home righted the ship and he met unbeaten Saen Sor Ploenchit for the WBA flyweight title in Thailand. Despite a valiant effort, Gamez lost a split decision. Another loss saw him take a break from boxing for two years.

When he returned, however, he quickly found his old stride, winning a comeback fight and was offered a spot on the Lennox Lewis-Evander Holyfield undercard against WBA flyweight champion Hugo Soto.

Determined not to let a third opportunity of winning a flyweight world title slip, Gamez stopped the Argentinean in emphatic style in three rounds at Madison Square Garden, New York.

He moved up to junior bantamweight to stop Josue Camacho in Puerto Rico before returning to Thailand, where he yielded his WBA 112-pound laurels to Sornpichai Kratingdaenggym. For the first time in his career Gamez, was stopped.

The diminutive Venezuelan had turned 37 and been off for over a year when he was given an opportunity to write his own piece of history against WBA junior bantamweight titleholder Hideki Todaka. Gamez was supposed to be cannon fodder; however Gamez wasn’t quite ready to retire and stopped the defending champion in seven rounds, which marked his fourth world title in as many weight classes.

He lost his title in his first defense, back in Japan. He attempted to further his record by taking on the much bigger Johnny Bredahl, in Denmark for the WBA bantamweight title in November 2002, dropping a spirited unanimous decision.

Venezuelan law requires a boxer to retire when they turn 40. They waived that for Gamez to continue, although he dropped a decision in a rematch to Todaka and a decision to Volodymyr Sydorenko in a bantamweight title eliminator.

After losing to Poonsawat Kratchindaenggym in December 2005, Gamez, then 42, decided to retire. He did so with a record of 35-12-1, with 26 knockouts. He took part in 15 world title fights, all on the road. In total, he fought in nine different countries.

Looking back, there were several rivals he would have liked to have met that he wasn’t able to because his managers preferred for him to fight in Asia.

“I would have liked to have faced Ricardo ‘Finito’ Lopez, Michael Carbajal and Chiquita Gonzalez,” he said. “I could not face them because my managers never introduced me to the American market, [except one fight].”

Gamez, now 55, has six children and two grandsons. He lives in Maracay, Venezuela, and teaches around 20 children how to box at his Leo “Torito” Gamez gym, where he hopes to create future world champions.

Johnny Bredahl: Without a doubt the best jab I faced was against Johnny Bredahl. He was a good fighter; he had a lot of height. He had a great, fast jab that kept his rivals at distance.

Pichitnoi Sithbanprachan: He was the fastest fighter I faced. Even when I defeated him, he gave me a lot of problems. My experience made the difference that night.

Sithbanprachan: I was not able to find him inside the ring. He drove me crazy.

Myung Woo Yuh: He was a rough man, even when I was beating him, he never went back.

Yuh: He was very intelligent.

Hugo Soto: He really can hit. This Argentinean puncher had an incredible record with 34 knockouts in 58 fights.

Yuh: He was very brave and rough. Despite hitting him hard, I could not made him go back.

Sithbanprachan: He was very fast and very skilled with his hands and feet.

Yuh: He is the best overall. He had everything: power, strength, intelligence and stamina. Apart from that, he made 19 defenses and was a top boxer in that division.