Shun Kubo unfazed by away mission against Xu Can 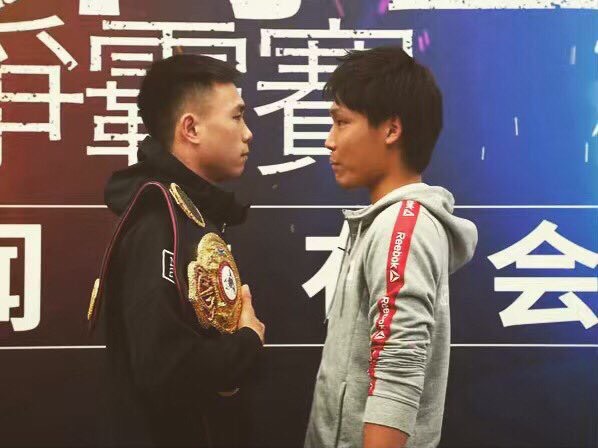 The comeback trail for Shun Kubo has been long and far from easy. The 29-year-old was the WBA junior featherweight titlist in 2017 before losing to the now unified IBF and WBA titleholder Daniel Roman by ninth-round TKO. Since then, Kubo has only fought once, against the resilient Hiroshige Osawa, and squeezed out a split decision victory.

That was 13 months ago and Kubo (13-1, 9 knockouts) will be hoping the rest worked in his favour because things won’t be easy in his next outing. On Sunday he faces Xu Can in Fuzhou, China as the visiting underdog in a fight that will be contested for a WBA secondary title at the featherweight limit.

The card itself is promising as Max Power Promotions has emerged as a formidable producer for Chinese boxing. The lead promoter Liu Gang, who’s a familiar face inside Japanese gyms and fight cards around the country, has hosted several shows showcasing Japanese and Chinese fighters against each other, in effect playing to the commercial appeal of nationalistic rivalry. The Chinese fans themselves love a good fight and will respect the winner no matter their background, as was the case for undercard contestant Sho Kimura, who defeated local hero Zou Shiming in 2017.

Adding to the dynamic of the fight is the revelation that Kubo recently underwent surgery. An article by Nikkan Sports said the star of the Shinsei Gym in Kobe, had corrective eye surgery in March, after being diagnosed with fourth cranial nerve palsy. The surgery was apparently a success, or the fight would have been cancelled, however, the potential for further damage still exists.

Meanwhile, Xu Can (16-2, 2 KOs) is riding the crest of a wave after he secured a 12-round unanimous decision upset over Jesus Rojas last January.

Far from intimidated by the challenge ahead, Kubo was generous enough to speak to The Ring ahead of this very important bout.

The Ring: This weekend you’re fighting at featherweight, which is where you started your career before you won a title at junior featherweight. Do you feel more comfortable at this weight?

Shun Kubo: Of course, I feel better physically and mentally this time. I feel good fighting at featherweight.

Kubo: I thought my power was not enough in the featherweight class, so I chose to move down to (junior featherweight). I wasn’t in bad condition or anything, it’s just that Roman was stronger than me.

The Ring: Did you suffer an eye injury in your last matchup against Hiroshige Osawa, or did it happen against Roman? What exactly happened and what is your health status now?

Kubo: My eye problem wasn’t because of the Osawa fight. It happened when I was in training camp before fighting Roman.

The Ring: As mentioned before, because of injury you haven’t fought in over a year, and you’ve only fought once since your matchup with Roman. How did you spend your time over the last year?

Kubo: I tried to rest and heal myself, but I still trained when I could, based on what the doctor said I could work on.

The Ring: You’re going into enemy territory and taking on Xu Can in China. Does battling the foreign conditions make your matchup harder?

Kubo: I don’t feel much of anything right now, but maybe when I stand in the ring, I might be a little nervous. I think I can show my boxing abilities to everyone regardless of the location.

The Ring: Xu Can is a regular sparring partner of Naoya Inoue. He has since emerged victorious in his last fight against Jesus Rojas and surprised a few people in doing so. What do you expect from him in fight night?

Kubo: I think Xu Can has a really strong mentality, so I think he will try to pressure me from the beginning

The Ring: Do you have a message for your opponent?

The main event between Kubo and Can, along with its chief supporting contest between Sho Kimura and Carlos Canizales, will be streamed live online on the WBA’s website: WBAboxing.com

Editor’s Note: Can will be defending a version of the WBA featherwieght title that is unrecognized by The Ring. Leo Santa Cruz is the WBA titleholder at 126 pounds