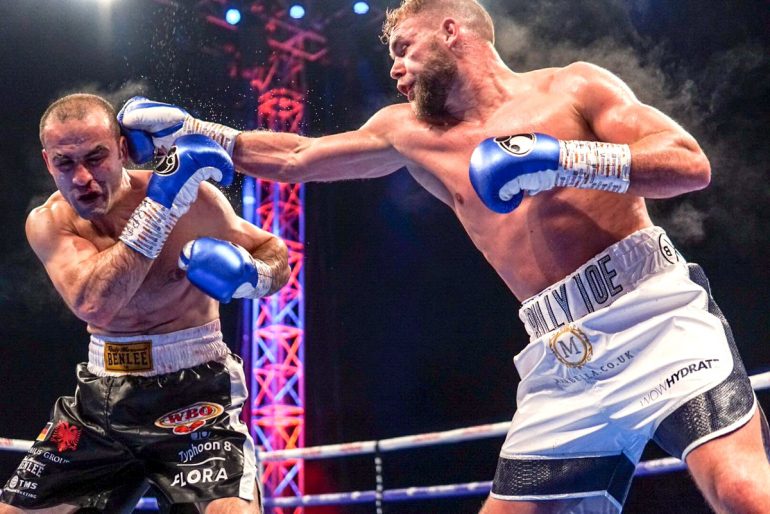 Photo: @frankwarren_tv
18
May
by Tris Dixon

Billy Joe Saunders added the WBO’s super middleweight title to his career haul of belts with a sound drubbing of Shefat Isufi in Stevenage.

Saunders, who won widely on all three cards, improved to 28-0 (13 KOs) and new trainer Ben Davison called his performance a “masterclass” as Isufi dropped to 27-4-2 (20 KOs).

Saunders, looking sharp and alert, was on the front foot from the opening bell. Isufi was instantly struggling to keep up with the former middleweight champion’s speed, and the gap in class was glaringly apparent. Isufi had no business at this level, despite his mysterious No. 1 ranking with the WBO.

He was trying to land, but Saunders was looking too slick and accomplished, and the visitor was clearly respectful of Saunders’ speed of hand and foot and was increasingly wary about being caught on the counter.

The Englishman was rattling off combinations in the second with next to nothing coming back.

It was already becoming a procession and Saunders seemed to be enjoying it.

Billy Joe Saunders is enjoying himself in there!

He delights the crowd with a throwback to that iconic Lemieux moment ? pic.twitter.com/qfAYkvCQwQ

Isufi’s predominant tactic was to cover up tightly and hope the storm would subside.

It didn’t, although there were lulls in the action.

Saunders set about the body in the fifth, turning the screws as the German-based Serbian started to absorb a slow beating.

Yet Billy Joe was rattled by a brace of right hands to open the sixth, which gave Isufi some hope and caused Saunders to back-pedal, although his success was short-lived.

The favorite took fewer chances, but the gap between them was incredibly wide, with Saunders pitching and Isufi catching.

Saunders was dominating into the later rounds, all the while shedding rust after boxing just four rounds since his impressive victory over David Lemieux in December 2017.

He coasted the rest of the way, relaxed and fought with his usual southpaw swagger. He could have gone for a grander finale than he did, but trainer Davison – who replaced Dominic Ingle several weeks ago – implored him to box and not get involved unnecessarily.

“(It was) my first 12-rounder at super middle,” said Saunders, who reckoned he would be ready to fight again in July. “He caught me with a good shot. I ain’t been in a meaningful fight in over 14 months; he’s No. 1 with the WBO for a reason, so he’s obviously good. My boxing ability will always get me further in the sport. Respect to my opponent and thanks to Ben Davison.”

Saunders said in the week that he would go back down to middleweight for a fight with Demetrius Andrade but might now have more lucrative options at 168 pounds, including Ring Magazine champion Callum Smith.

Joe Joyce dismantled Alexander Ustinov in three rounds and said he is hoping to be in the world title picture by the end of the year.

The Adam Booth-trained heavyweight, in his first fight under his new coach after leaving Abel Sanchez, improved to 9-0 (9 KOs) and was typically relentless in breaking down the visitor from Belarus.

Joyce took the first two rounds, dictating with a busy left jab and having success with several jarring left hooks and right hands. Ustinov was unable to slow his charge as Joyce clubbed away with straight shots and hooks in the third. It was one-way traffic, and Ustinov finally crumbled when pummeled to the floor by a left hook before being counted out by referee Victor Loughlin.

Another win. Another KO. ?

Joe Joyce stops Alexander Ustinov in the third round! pic.twitter.com/aTMVwiaDwh

There were signs of improvement for 33-year-old Joyce under Booth, including punch variety, patience and movement. He looked harder to hit than the static target he presented to former WBC heavyweight titleholder Bermane Stiverne, whom he halted in six in February.

Ustinov, 42, drops to 34-4 (25 KOs) and has lost three in a row after being outscored by Manuel Charr and stopped in nine by Michael Hunter. His other loss was a 2012 11-round defeat to Kubrat Pulev.

“He’s a seasoned veteran, he’s very tough,” said Joyce. “I was trying to incorporate what Adam Booth was telling me in the corner. I came in warm and ready, and it’s great to put on a good performance.”

Joyce is due out again on July 13 in London on the O2 Arena bill, which is headlined by the British heavyweight showdown between Daniel Dubois and Nathan Gorman.