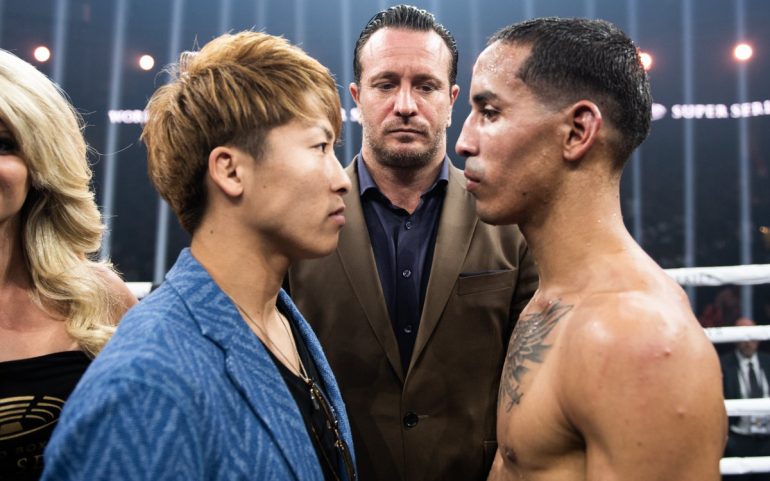 Emmanuel Rodriguez (right) will face Naoya Inoue next. Photo: Twitter @WBSuperSeries
03
May
by The Ring

The World Boxing Super Series and The Ring have been synchronized to this point.

For a while it looked like the WBSS bantamweight tournament would follow suit when a 118-pound spanner was thrown in the works.

Zolani Tete, the reigning WBO titleholder, suffered a shoulder injury and withdrew from a semi-final bout against Nonito Donaire and, consequently, from the tournament. The slick South African lefty is currently rated No. 2 by The Ring and, suddenly, the prospect of a Ring title fight taking place in the final was uncertain.

Donaire, currently rated No. 5, won in devastating fashion against late substitute Stephon Young in New Orleans on Saturday, but that result could not advance the classy four-weight world titleholder any further. “The Filipino Flash”, who is holder of the WBA championship, is likely to remain on or around the No. 5 spot until the tournament final.

However, on May 18, Naoya Inoue and IBF titleholder Emmanuel Rodriguez put their unbeaten records on the line in the other semi-final, which will be staged at the SSE Hydro in Glasgow, Scotland. Inoue, who is rated No. 1 by The Ring, is one of the finest fighters in the world today in any weight class. Rodriguez, who is rated No. 3, is an unbeaten world titleholder and a terrific fighter.

“I think it is worthy,” said The Ring Editor-in-Chief, Doug Fischer. “For starters, Tete, our No. 2 contender, is unable to compete, but also because Inoue and Rodriguez have earned their positions in our rankings – Inoue with back-to-back first-round KOs against top-10 contenders Jamie McDonnell and Juan Carlos Payano; Rodriguez with back-to-back decisions over top-10 contenders Paul Butler and Jason Moloney. Rodriguez also has a 10-round victory over former two-time title challenger Alberto Guevara (2016).”

The ratings panel were consulted and, by the slimmest of margins, the bout was deemed worthy of being a Ring championship bout.

If Inoue wins on May 18, he rubberstamps his supremacy at bantamweight. If Rodriguez springs the upset, then he is unquestionably the man at 118 pounds and a pound-for-pound player in his own right. When Tete has recovered from injury, our hope is that he will challenge the winner of the World Boxing Super Series sometime in 2020.

Inoue-Rodriguez and the IBF junior welterweight title bout between Josh Taylor and Ivan Baranchyk will be shown live on DAZN in the U.S. and Sky Sports in the U.K.