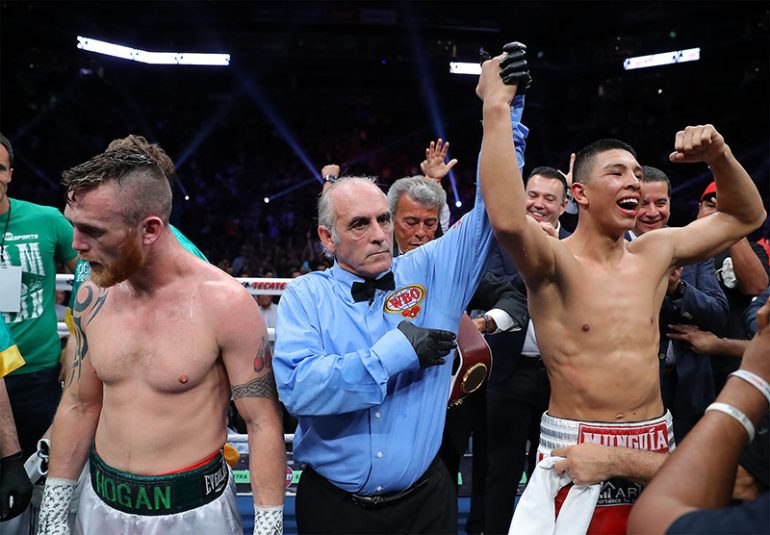 Munguia had his hand raised after 12 rounds with Denis Hogan but many felt the Irish challenger deserved the nod. Photo / HoganPhotos
13
Apr
by Francisco Salazar

Munguia (33-0, 26 KOs), a Tijuana native, retained his WBO 154-pound title with with a back-and-forth fight that was closer than what many expected going into the bout, which was streamed live on DAZN in the U.S.

It was Munguia’s first title fight in Mexico since winning the WBO title by knocking out Sadam Ali last May. Munguia was a huge favorite to defeat Hogan (28-2-1, 7 KOs), an Australia-based Irishman who entered the fight having won his previous six bouts since losing by decision to Jack Culcay in December 2012.

The taller Munguia was the aggressor from the opening bell, initiating exchanges. Munguia worked from the center of the ring as Hogan looked to counter from distance.

By the midway point of the fight, Hogan began to effectively counter Munguia to the head, connecting with several right hands and digging to the body as both fighters stood in the pocket.

Munguia’s punch output and energy diminished with each passing round during the second half of the fight. Hogan threw more punches and, while he may have missed several punches, was still the more accurate fighter, going into the championship rounds.

Sensing the fight was close, Munguia looked for a second wind, throwing everything he could during the 12th round. Both fighters swung at one another until the final bell sounded.

Munguia had expressed interest in moving up in weight and fighting the likes of Canelo Alvarez and Gennady Golovkin. Those plans may be put on hold as Munguia might have unfinished business with Hogan, should the WBO order an immediate rematch.

That would be an option for Munguia, but so would an immediate move up to 160 pounds.

“It was difficult for me to make 154 pounds. I felt a little bit tired too. I’m going to have to speak with my team (co-promoters Golden Boy Promotions and Zanfer Promotions) about my next move.”

Hogan thought he did more than enough to win the fight.

“I knew I won the fight,” said Hogan. “We came here in good faith. This (decision) is bad for me. This is bad for boxing. I kept moving (around the ring). His power didn’t faze me because I was moving. He knew he was losing. He was frustrated. I knew I could take his shots. Of course, I’ll take a rematch.”

The 10-round bout between Diego De La Hoya and veteran Enrique Bernache was ruled a No-Decision after the bout was stopped due to a cut suffered by Bernache by an accidental clash of heads.

Saturday’s fight was supposed to be De La Hoya’s debut as a featherweight. It was also the first fight for De La Hoya in about 10 months.

De La Hoya was scheduled to fight in November in his hometown of Mexicali, Mexico, but had to withdraw from the fight a few days before the fight when he reportedly collapsed in an attempt to make weight.

A clash of heads during the second round opened a cut on the forehead of Bernache, producing a steady flow of blood from the cut. The fight was stopped at 2:25 after the ringside physician was consulted and deemed Bernache unfit to continue.

The taller Teixeira was the more-effective fighter, but Lozano (33-9, 24 KOs) closed the distance during the last three rounds, connecting with several hooks and crosses to the head.

Teixeira is ranked No. 4 by the WBO.