Anthony Crolla: ‘I admire Lomachenko, I respect him, but intimidated? Not in a million years’ 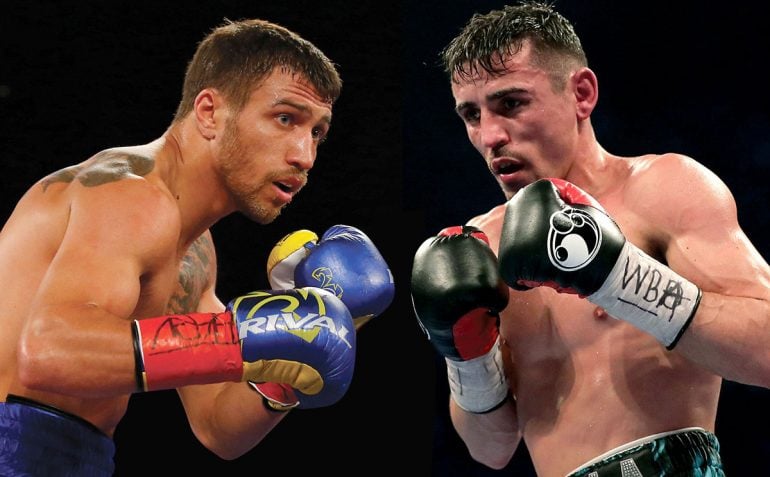 Manchester’s Anthony Crolla has been there and done it during his rollercoaster career.

Never tabbed as a world champion in the making, Crolla confounded the critics and achieved his dreams. He won the WBA lightweight championship in November 2015 by halting Columbian slugger Darleys Perez. He was the underdog in his first defense against then-unbeaten power-puncher Ismael Barroso but fought brilliantly to win by knockout. Jorge Linares proved to be a bridge too far, but Crolla, who is ranked No. 4 by The Ring at 135 pounds, remains a top player in his division.

On Friday at the Staples Centre in L.A., the affable Englishman faces off against the great Vasiliy Lomachenko and The Ring, WBA and WBO 135-pound title belts will be at stake. Despite having ample experience at world-level, the challenger knew that this training camp would border on torture as he readied himself for battle against arguably the finest prizefighter in the world today.

“It’s been more intense, and we’ve tried to train ourselves mentally for how tough it could get in there,” said Crolla in an interview with The Ring. “Lomachenko has the habit of making opponents quit so we’ve been training to deal with frustration, if that makes sense. He frustrates the life out of opponents and that’s not just because of the beating he gives them, it’s because they’re having zero success.

“Physically we’re prepared, but I always train hard. I’ve been smart, but I also believe that I’ve trained harder than ever. I’ve pushed myself to the limit, but that’s the way it should be. I’m fighting one of the best fighters on the planet. My life has just been gym, motorways, gym, motorways, gym. My life has just been boxing and I’ve seen very little of my family. That’s the sacrifice you’ve got to make, you have to prepare differently for a fight of this magnitude.”

In the August 2017 issue of The Ring, Lomachenko was cover star for the very first time. The corresponding story focused on what makes the Ukrainian star so good and we spoke to a variety of boxing insiders to garner opinion. Former two-weight world champion Paulie Malignaggi, a brilliant analyst, had this to say when I spoke to him:

“Lomachenko’s footwork is on another level. People are amazed by that, but what they miss is how he goes about achieving angles. He’s stepping around all the time and he does that with a combination of footwork and punch output. A lot of time, he’s using his punch output to step around. He’ll take the power off some of the shots but throw them at speed so that he puts you out of position. The opponent reacts to that speed, loses position and Lomachenko has put himself into a new position. Then he’ll start to sting you. He does that consistently and he does it with a lot of variation. Sometimes he’ll throw a combination that means something, sometimes he’ll throw a combination that means nothing, but then he’ll be changing the angle. I call these lighter shots decoys. It’s hard to keep up with him because he’s changing things up so often. Sometimes he’ll even change mid-combination.”

“He’s so well-balanced, and when he sees the opening he’ll pounce,” said Crolla in response. “You see it in the Rocky Martinez knockout; he’s all around him and then bang, bang – uppercut, right hook. That was a brutal knockout. Paulie Malignaggi has got it bang on there. People do talk about the footwork, but it’s how well-balanced he stays when he’s moving around the opponent and looking for his angles.

“(Jose) Pedraza played him at his own game at times. You’ve got to remember, Pedraza is remembered mostly for his knockout loss to Gervonta Davis, but he’s a great fighter. He’s an Olympian and a two-weight world champion. We’ve looked at that, where he had success, but me and Pedraza are totally different fighters. Linares also had success because he was spinning off with Lomachenko. He’d done his homework too. Lomachenko is so good at getting to the side of the opponent, almost behind them. Linares spun with him to offset that and stop it from happening. Movement is so important in this fight.” 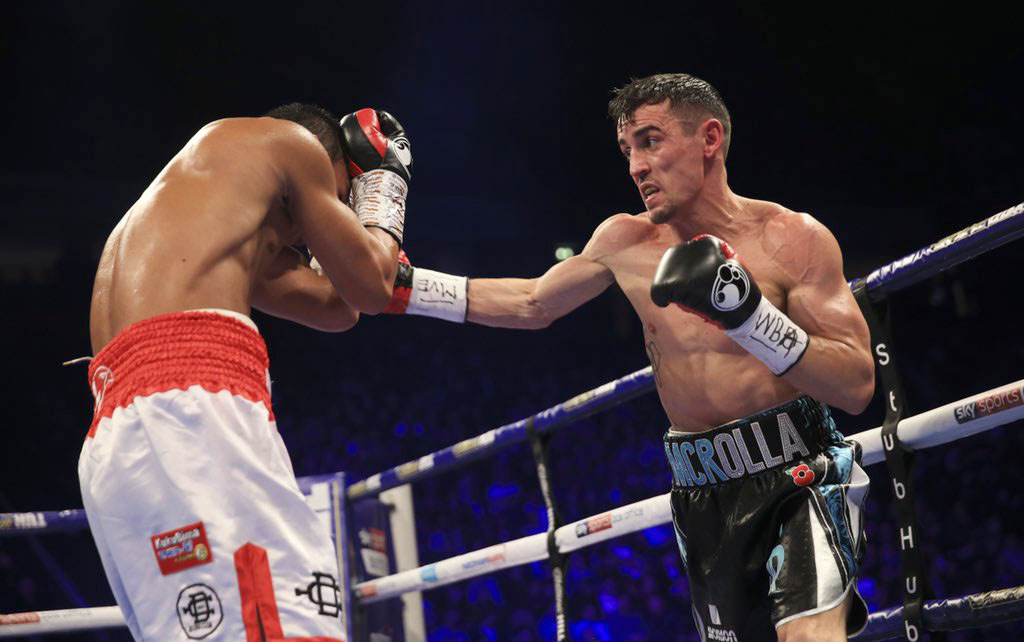 Crolla on the attack against Daud Yordan. Photo by DAZN

Crolla (34-6-3, 13 knockouts) has poured his heart and soul into this task, but his mental strength has also been tested to the full. The Englishman has remained professional and obsessively determined despite being 16-1 against in a two-horse race. The bottom line is that Lomachenko would start favorite against any fighter at 135 pounds, but the response to the Crolla fight being made official was met by ridicule in some quarters.

“I’ve been at world-level for a very long time,” said Crolla defensively. “I’ve been in The Ring top 10, which I’m super-proud of, for a number of years. I’ve not been handed this shot, I’ve not been randomly picked or won a raffle. People seem to forget my first fight with Linares because he beat me well in the rematch. The right man won in the first fight, but there wasn’t loads in it. I boxed Ricky (Burns), and look what he’s achieved. I fought Daud Yordan, a tough old fight, and he’d been in the (WBA lightweight) top 10 for years too.

“I admire Ray Beltran a great deal. If he’d beaten Pedraza, he would have got Lomachenko. Would he have been getting this kind of stick? Richard Commey? I admire him too, but what’s his best win? (Isa) Chaniev, right? Commey looked great in that fight, and he can punch, but he’d still have been a massive underdog. Whoever fought Lomachenko was going to get stick, I just happened to be near the front of the queue. But if Lomachenko wasn’t getting Gervonta Davis or Mikey Garcia, then I have as strong a claim to fight him as anyone.”

There’s every possibility that this will be Crolla’s last throw of the dice at world title level. He’s done everything, more than he would have expected, and there aren’t many dragons left to slay. At 32 years old, heading into his 44th professional fight, the Manchester man is in the twilight of his career. He got married last year and has a young son.

“I love boxing, it’s been good to me and it’s a huge part of my life,” said Crolla in earnest. “Recently, I’ve been training kids at my old amateur gym and I get great satisfaction out of doing that. But the flipside is that boxing loves no one back. If you’re in boxing too long, it can take too much out of you. I’ve achieved in the sense that I won the world title, I’ve got a house paid off and a little bit more. I’m not living a lavish lifestyle, but life is good and I got out of boxing what I wanted.

“This fight is a nice payday, a career-high payday, but it’s much more than that. It’s a chance to put my name next to fighters who have scored – and I’m not speaking out of turn here – some of the biggest upsets in British boxing history. That, as a boxing fan, as someone who loves the sport, who lives for the sport, that’s massive motivation for me. I’m not stupid, and I think I know how tough this challenge is, but I’ve drilled myself into the best condition possible. I’m going over there with a plan to shock the world. I admire Lomachenko, I respect him a great amount, but intimidated? Never, not in a million years. I’d be more intimidated about not doing my people proud. I certainly would never be intimidated by an extremely talented fighter. No way!”

Lomachenko-Crolla will be broadcast live on ESPN+ in the U.S. and Sky Sports in the U.K.