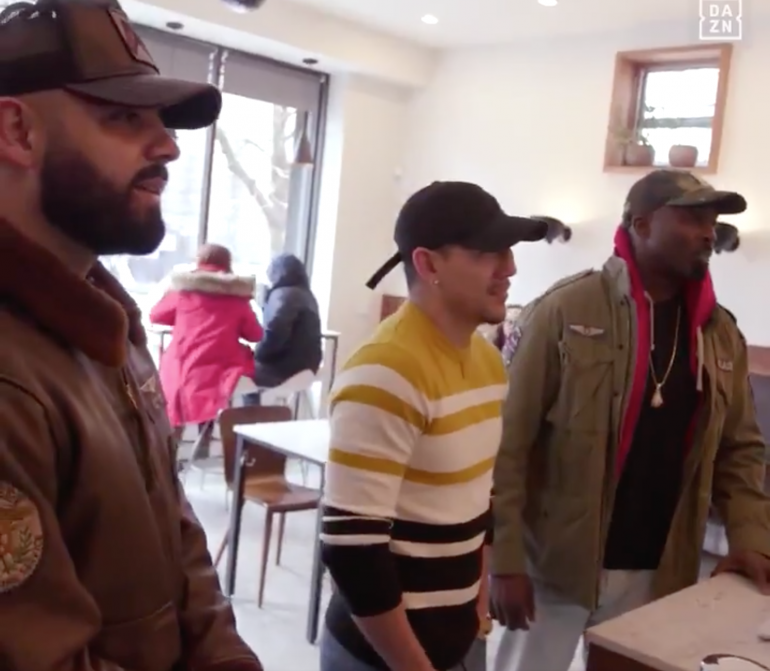 Teofimo Lopez "pulled up" on an internet detractor in a new skit on DAZN.
04
Apr
by Michael Woods

My friends Ak and Barak do some excellent work on DAZN; the Brooklyn gents have a superb ability to get a rapport going with fighters, put them at ease, and therefore they are able to do some fun bits with the pugilists on DAZN roster.

They’ve done videos with Anthony Joshua that have acheived some viral effectiveness.

I was alerted to this video here, which is a crackup.

Another Instagram troll gets pulled up on by Ak & Barak…

Ak and Barak find an IG post which has a social media warrior talkin’ smack about a fighter. They figure out who the poster is and where they can find the poster. Then, surprise! This dude had some things to say about Teofimo Lopez, and guess who Ak and Barak brought with them when they asked the dude about his stance.

Looks like the kid’s heart was beating out of his chest.

I love the concept; it helps people better understand that it is better to say on social media what you’d say in person, ideally. I think the kid got it…

But here’s another element in play.

Teofimo is a Top Rank fighter, he’s not signed to Matchroom, or Golden Boy, and doesn’t fight on DAZN. Lopez will fight April 20, at Madison Square Garden, against Edis Tatli, on the undercard of the Terence Crawford-Amir Khan main event. This card is a PPV production, and all ESPN fare is running on the ESPN platform.

So….are we to read anything into this? Does it mean anything that Lopez does this video with the duo who provide content to the DAZN platform?

I asked around, sent a query to a DAZN person in the know. Then I asked Top Rank bossman Bob Arum:

Bob, I asked, is there the possibility that Top Rank and DAZN will link up so their talent can inter-mingle? I saw that DAZN video featuring Teofimo, I noted. Might we see your guy Tyson Fury fight Anthony Joshua, then, before we’d be seeing Fury fight Deontay Wilder?

“We are all in boxing,” is all he would say. Then, minutes later, he messaged back. “You don’t have a clue, call me for a lesson.”

So, Arum explained, “Wilder is managed by Al Haymon and Shelly Finkel advises him, he fights on Show and Fox,  therefore he’s eligible to fight in the US, to fight Tyson Fury, and Fury fights on ESPN, and they all can do a joint distribution deal. It would be on PPV in the US, and that’s the biggest source of money there would be. Anthony Joshua is fucked with Eddie Hearn, he can only do fights on DAZN, and they can’t do PPV, they are a dedicated streaming service. Joshua is out in the cold, he can’t fight Wilder or Fury. If Joshua remains with DAZN, it’s as simple as that. No name calling…it’s how these fighters are tied up. It doesn’t have anything to do with Al Haymon blocking it.

“Now, at welterweight, Crawford won’t fight Spence because Haymon won’t allow it. In this case, the three players, it’s relatively simple. Until Joshua extricates himself from DAZN and Hearn – I say Hearn because it’s one and the same – he has to fight other competition, like “Big Baby” Miller and guys like that. That’s what Haymon and Finkel explained to Wilder, and that caused Wilder to turn down DAZN. If he signed that way he would be limited to the streaming service and couldn’t transition to PPV. Now, John Skipper would argue that the future is not with pay per view, it’s with streaming, that money can be made streaming. I’m not saying that argument is totally fallacious. But that isn’t a reasonable argument now…five or ten years from now, who knows…but now the big money is still with PPV.

“If you talk Joshua against Fury or Wilder, the money is what DAZN puts into it. It’s not real money. It’s artificial money, what’s real money is pay per view, that’s the public voting with their pocket.”

A source at DAZN weighed in, when I asked if it actually means anything that we see the Top Rank fighter featured on the DAZN promo:

“I wouldn’t read anything into it,” the DAZN source said.  “Ak and Barak have been talking to boxers outside of the DAZN universe since we launched.”

So, will we see heavier co-mingling? “Well, Anthony Crolla is fighting Loma,” the source said, referring to the Matchroom boxer, with a 34-6-3 mark, who fights the technical wiz Loma on April 12. “We’re not opposed to it. We like it too, really.”

And so do we, meaning boxing fans, right? But there are layers to this, and the layers and issue is maybe a bit more complex than some assume, because we are in a different age. The changeover to new platforms,  all the cord-cutting, the push to gain market share and traction in the OTT space…this is new territory for these players and so they aren’t relying as much on established playbooks.

Listen to Bob Arum on the Talkbox podcast here.