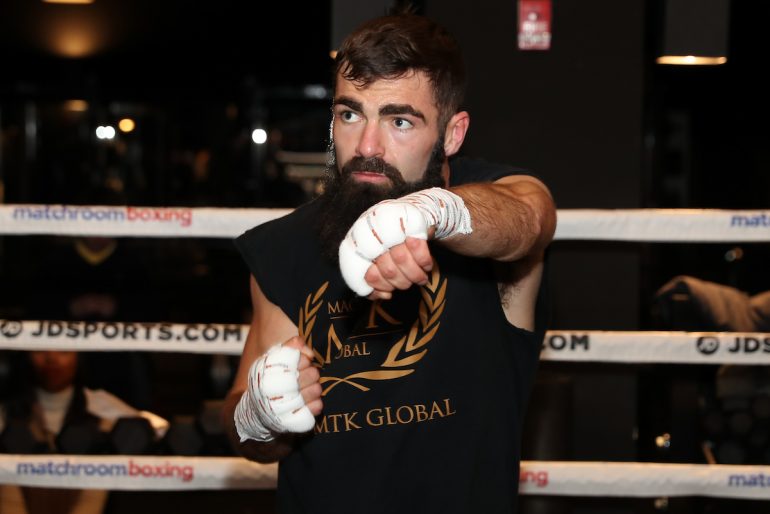 PHILADELPHIA — Jono Carroll knew the question was coming. It was there, literally hanging from the Irish southpaw’s face, a thick, black beard that he knew would have to be trimmed before stepping foot in the ring to face IBF world super featherweight champion Tevin Farmer (28-4-1, 6 knockouts) this Friday live on DAZN in the U.S. and on Sky Sports in Britain, from Temple University’s Liacouras Center.

“I trim this beard all of the time, at least once or twice a week,” said Carroll, from Dublin, yanking at his bearded strands. “This beard grows really quick. I’ll trim my beard. I’ll shave my head if he wants me to shave my head. It doesn’t really matter to me. My plan is to come in here and destroy. That’s what I’m here to do. I don’t care about the hair on my body.”

This will be Carroll’s first chance at a title, and first fight since he battled to a draw in a competitive fight against Guillaume Frenois last December.

When asked what he thought his advantages over Farmer were, Carroll replied, “I’m mentally stronger than anyone you put me in that ring with. I believe Tevin Farmer is a very slick opponent. I just believe that mentally I’m stronger than most of the boxers over here. I believe in myself 110 percent.

“Even when I was out of boxing for two years, I was telling people that I want this and no one believed me. Well, if you don’t believe me, let’s see what I can do then. Now look what I’ve done.”

A southpaw himself, Carroll (16-0-1, 3 KOs) stressed that he didn’t mind taking on another southpaw.

“I doesn’t matter to me,” he said. “Left handed, right handed, they all bleed red. We’re boxers, we’re supposed to be adaptable to anything that comes.”

Farmer has a good idea of Carroll’s strategy. He’s going to crowd Farmer, who’s faster and the better boxer.

“This is a new world for him, he’s stepping up to a whole different level with me and he can keep talking,” Farmer said. “He’ll pay for it. He says we both come from tough backgrounds, the hood. That boy hasn’t come from any struggle, no hood. I’m going to show him when he comes to Philly, he’s going to eat his words. He’s trying to get his buzz up but there’s certain things that you don’t say. He’s made this personal and you don’t want to get personal with a Philly guy like me.

“This is big for me, fighting as a world champion in Philly. When does Philly hold big World championship shows? This is big – it’s a boxing town but this is as big a show as there’s been here for a long time.”

Carroll did say that he felt Farmer was “a great champion”, but that he’s going to take the belt from him.

“All of the pressure is on him,” Carroll said. “He’s fighting in his hometown, but there’s going to be more Irishmen there. Tevin Farmer is not that exciting to watch. I’m the one who brings the excitement. I think the pressure is on him more, but, of course, he’s been beat in that venue before.

“I plan on doing the same again. The plan is to win. I have one thing in mind and that’s taking that belt home.”