Tevin Farmer finally finds himself in the spotlight – but will anyone be home? 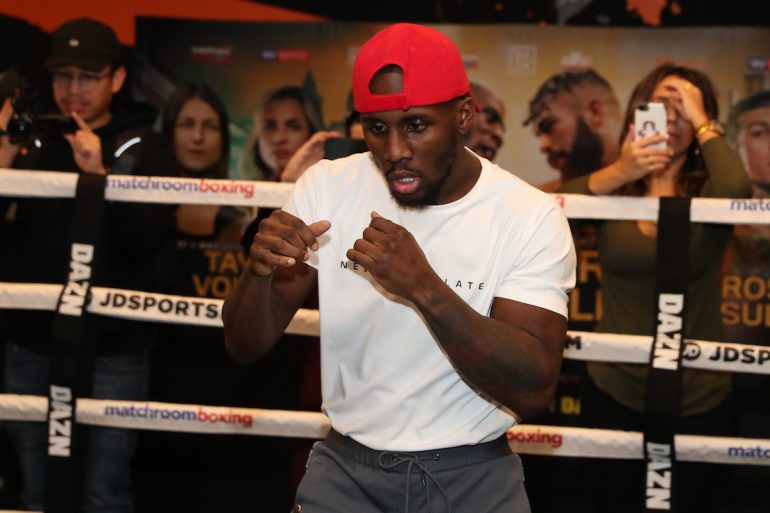 PHILADELPHIA — For once, the circle of jutting microphones, and cameras, and digital tape recorders were surrounding Tevin Farmer. For once, the IBF world super featherweight champion was the one holding center stage, commanding the attention of the gathered boxing media that had filled the swanky Everybody Fights Gym, just off of Market Street in Philadelphia on Tuesday afternoon.

For once, Farmer, the Philadelphia southpaw who was unjustifiably tabbed a journeyman early in his career, was the one in demand.

Farmer (28-4-1, 6 knockouts) was wrapping up his open workout in preparation for his third title defense, getting ready for unbeaten, bearded southpaw Dubliner Jono Carroll (16-0-1, 3 KOs), this Friday live on DAZN in the U.S. and on Sky Sports in Britain, from Temple University’s Liacouras Center.

It’s supposed to be a homecoming for Farmer. But, unfortunately, you wouldn’t know it. There was more foreign media at the open workout than there was anyone from Philadelphia—and it wasn’t Farmer’s fault, nor Matchroom Promotions or DAZN.

Apparently, the last boxing champion the Philadelphia media may know was Bernard Hopkins, who last wore a title belt in 2014. Farmer has been lost in Hopkins’ wake turbulence. Farmer has been featured once by the Philadelphia media (by this writer for PhillyVoice.com), and the only other time Farmer was mentioned came last August—on a feature piece on Philly.com (the internet arm of the Inquirer and Daily News) about Danny Garcia.

Other than that, nothing.

The irony is that Farmer defines “the Philadelphia fighter.” Like Hopkins and Garcia, Farmer started with hardly any fanfare. What crumbs of attention he got came on the local circuit, before he burst through in December 2017 after dropping a controversial decision to Kenichi Ogawa for the vacant IBF super featherweight title that Farmer currently holds (the Ogawa result was eventually changed to a no-contest after it was found Ogawa tested positive for Androstanediol).

“Going through what I went through, starting boxing late and everybody telling me that I’m a late starter, they didn’t think I could beat these guys, a lot of people told me that and I still did it,” said Farmer, who started his career 7-4-1 over his first 12 fights. “I have to be honest. I’m always honest. It feels great (fighting in Philadelphia).

“There are a lot of fans who support me who can’t make it to fights outside of the city. I’m happy I can bring it home and those people can see me fight. But I can say this, if this thing isn’t sold out, I’m never fighting in Philly again.”

Farmer, who will be fighting for the fourth time in the last seven months, never gave up on himself. Though, he admitted something interesting in the transformation he’s taken since 2013, when trainer Chino “Bambino” Rivas stepped into his life and around the same time he last lost. Farmer has been on a seven-year, 21-fight winning streak since connecting with Rivas.

“I knew I could have been on top, I just wasn’t taking boxing seriously, it was just a hobby (early in his career),” Farmer said. “It’s a lifestyle. That’s the difference. I reached out to a lot of people. I just needed guidance.”

In stepped Lou DiBella. The popular New York promoter brought in Farmer on a week’s notice to fight then-budding star Jose Pedraza, who stopped Farmer in the eighth round of a scheduled eight-rounder. That marked the last time Farmer has lost, and it also made a believer out of DiBella.

“Tevin was used as an opponent from his pro debut,” said DiBella, who’s revived the careers of Paulie Malignaggi, Arturo Gatti and Micky Ward. “I remember about a year after the Pedraza fight, I was sitting in a bar watching one of (Oscar) De La Hoya’s prospects and this guy giving the undefeated prospect hell. When they mentioned the kid’s name, ‘Tevin Farmer,’ it rang a bell. I got him the last two years, and just when we’re ready to make a move, he busted his biceps up.

“I’ve never been a believer that the record should be the penultimate thing in judging a fighter, I’ve seen too many undefeated stiffs.”

As for Carroll, Farmer doesn’t feel the fighter from Ireland has anything over him. Farmer wore a white t-shirt that said, “Never too late,” which Farmer is trying to brand.

“Life is all about opportunity and timing, and you have to take advantage of it when it comes, because you never know when that opportunity will come again,” Farmer said. “I had a horrible start in my career. I feel that if I can get over that hump in boxing, because you don’t have that ‘0’ on your record, I feel I can get through anything.

“I’m happy I went through that. It made me better. (Jono) can’t beat me no way, shape or form, inside of the ring or outside of the ring street fighting. I’m hoping he comes in the best shape possible, because I’m beating guys too easy. I want to be tested.”

By now, it’s fair to say, Farmer has passed a multitude of tests.