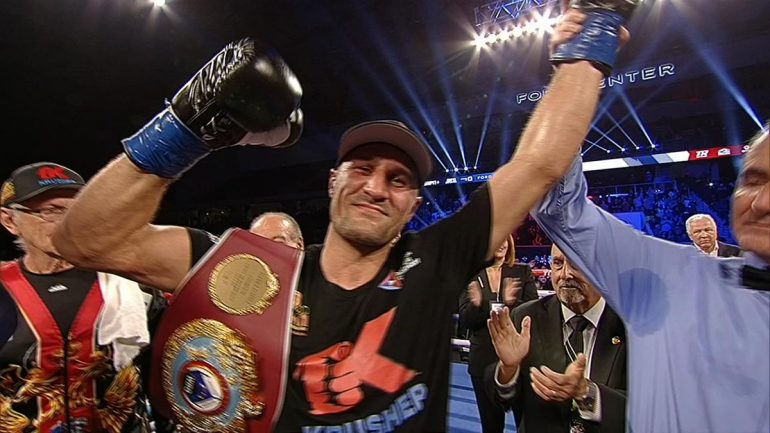 The reports of Sergey Kovalev's demise were greatly exaggerated by boxing fans and pundits.
07
Feb
by Doug Fischer

Most of the “story lines” going into the Eleider Alvarez-Sergey Kovalev rematch revolved around the seeming fragile state of former unified light heavyweight champ from Russia. Fans and media put on their psychologist hats and surmised that Kovalev’s two losses to Andre Ward exposed him as a “bully,” “broke his spirit,” which ultimately set up the 35-year-old veteran to be KTFO by Alvarez in Round 7 of their competitive WBO title bout last August.

Kovalev’s pending lawsuit for allegedly assaulting a woman in Big Bear, California last June didn’t inspire confidence among his dwindling fan base going into the February 2 rematch with Alvarez, and many predicted that he would fold from the first hard punch he took and that would likely be the end of his career, but the KO Artist Formerly Known as Krusher reminded everyone that he can box as well as he can punch. 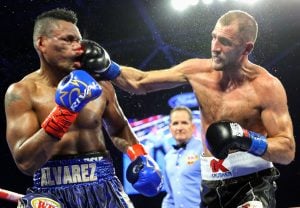 A focused and poised Kovalev (33-3-1, 28 knockouts) jabbed, moved and combo-punched his way to a clear-cut unanimous decision, handing the stifled Alvarez (24-1, 12 KOs) his first loss to regain the WBO belt. The Ring’s Ratings Panel was impressed with Kovalev, who seems rejuvenated under the guidance of new trainer Buddy McGirt, advanced the former pound-for-pound rated boxer-puncher to the No. 2 spot in the 175-pound rankings.

“I thought Kovalev had one last stand in him,” said panelist Martin Mulcahey, one of the few boxing scribes to pick Kovalev to win, “but I did think Eleider would find or exploit more holes. Still, that Kovalev jab is elite when he gets it going.”

Added panelist Anson Wainwright: “Alvarez was disappointing. He couldn’t put a sustained attack together and looked like he had a sparring partner’s mentality.”

Wainwright suggested dropping Alvarez, who had ascended to the No. 1 spot with his KO of Kovalev, to No. 5, and the rest of the Panel agreed.

No shame in being the fifth best light heavyweight in the world. With Oleksandr Gvozdyk, Dmitry Bivol and Marcus Browne joining Kovalev and Alvarez in the top five, the 175-pound division is among the deepest in boxing. 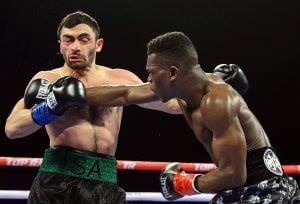 On the deep undercard of Alvarez-Kovalev 2, two lightweights took bold steps forward in their respective careers. Contender Richard Commey stopped Isa Chaniev in one round to grab the IBF title that barely eluded him 2½ years ago when he dropped a razor-thin split decision to Robert Easter Jr., a victory that moves the Ghanaian to the forefront of the Vasiliy Lomachenko sweepstakes; and The Ring’s 2018 Prospect of the Year brutally broke down former title challenger Diego Magdaleno to an impressive seventh-round stoppage.

“Teofimo confirmed his potential with win over a Magdaleno, who I thought would give him some trouble early, but no such luck as Teofimo gave a star performance,” said Mulcahey. “The division needs an injection of excitement, and Lopez is it.”

Heavyweight – Adam Kownacki moved up one spot to No. 8 on the strength of his second-round stoppage of Gerald Washington.

“Up one place,” said Wainwright. “This was more impressive than Big Baby Miller’s stoppage of Washington.”

Added Mulcahey: “I am for moving Adam Kownacki up over Miller as well. Neither is an Adonis, but Kownacki’s got better level of opposition overall and did better head-to-head with Washington.”

Light heavyweight – Kovalev advances to No. 2. Alvarez drops to No. 5.

Super middleweight – George Groves announced his retirement, thus was removed, which made room for two-time title challenger Jessie Hart to return at No. 10.

Junior middleweight – WBO beltholder Jaime Munguia remained at No. 3 after a hard-fought near shutout of gutsy Takeshi Inoue.

Mulcahey noted that European champ Sergio Garcia, who remained unbeaten with a decision over Ted Cheeseman, is “on the fringe of top 10.”

Welterweight – WBA titleholder Keith Thurman remained at No. 3 after holding off the stern challenge of Josesito Lopez via majority decision.

Wainwright suggest dropping Thurman a spot for struggling with a fringe contender, but he was overruled by other members of the Panel. 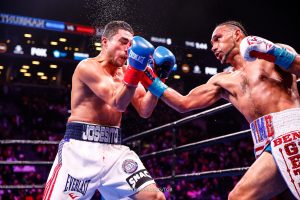 Josesito Lopez gave Keith Thurman hell during the second half of their WBA welterweight title bout but the defending beltholder dished out his share of punishment. Photo by Stephanie Trapp/TGB Promotions

“I’m probably in the minority, but I thought Keith Thurman looked pretty good considering the layoff and good opponent in return,” said Mulcahey. “He still has those fighting instincts when he needed to bare down as well. I would not drop him below Shawn Porter as I don’t see the gap there and Thurman does still own that win over him. I can see the argument the other way, but would wait to see what Porter does against Ugas next and then elevate on the back of a victory.”

Added Panelist Adam Abramowitz: “I think Thurman won 8 or 9 rounds last night and Josesito is no can. I wouldn’t move Thurman down at all.”

“I really liked Thurman’s performance, especially considering that he met the best Lopez I’ve seen in a long time, and after a long layoff,” said Morilla. “Even the seventh round was a great round for Thurman, he escaped a near-death situation with guts and skills, and if you watch the last 20 seconds of that round isolated you’d think he won the round! I wouldn’t move him for now, especially not down.”

Featherweight – WBO beltholder Oscar Valdez remains at No. 4 after stopping Carmine Tommasone in the seventh round. Jesus Rojas drops out of the ratings after being outpointed by Xu Can, who enters at No. 10.

Added Mulcahey: “Overall, I like Tugstsogt Nyambayar better than Xu, but agree that based on resume last two years Xu gets the nod for No. 10. I would be for dropping both Rojas and Scott Quigg (who’s done little at the weight) to bring in ‘King Tug’ as well, if not Tug is next in.”