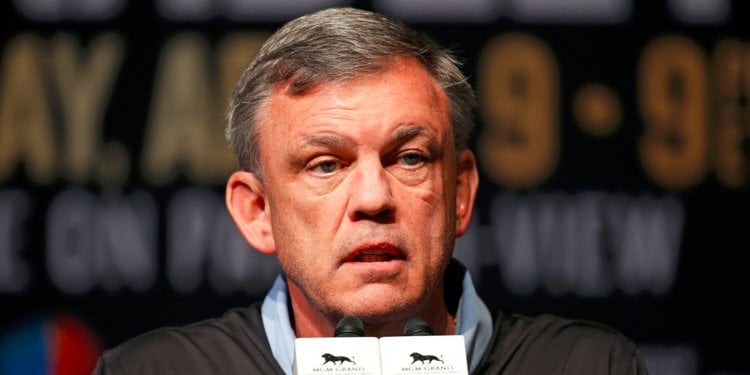 Teddy Atlas is hosting a new podcast, and, no surprise Staten Island Teddy is telling it like it is, like he sees it, with his signature flair and intensity.

Joined by co-host Ken Rideout, who works in finance, Atlas first off told us why he’s doing this pod.

Because “boxing is life,” he said, and he’d like to help people connect the dots, and see that they can fight on when they’ve hit the canvas, and soldier on.

He also touched on current events and hot topics: for starters, Atlas said that Tyson Fury didn’t re-invent the wheel or deserve mad props for his Dec. 1 showing against Deontay Wilder.

“He boxed, he did what boxers are supposed to do. Wilder is the one doing something un-extraordinary. Did I come here to knock Wilder? No, I came here to tell the truth, to give an honest podcast. If anything, what did Fury do? At the top of the list..he exposed Wilder, he exposed the guy that he ain’t that good.”

He has power, he was born with it, Atlas continued, but the Alabama boxer gets out of position. “I would say no, Fury didn’t do anything extraordinary,” he continued.

“It reminds you in life, you don’t have to be born with the biggest brain…the greatest physique, or looks or any of that, to close the gap, it’s called hard work, it’s called learning,” he said, helping listeners connect the dots on the subconscious reason why they are fans of boxing.

“That fight served to expose Wilder,” Atlas noted. His technique has been iffy, he said, and that showed that fact to more people. “It further drove home the point there’s a lot of great heavyweights out there…Are we in the era of great heavyweights? No. No!” He said AJ puts fannies in seats but he also is no all-time all-star. This is NOT a golden era, he repeated.

Atlas is as always entertaining; he noted that the Brits don’t have the Lebrons and the MLB stars to gawk at. Therefore, it’s easier for the UK to grow a mega-star than it is here. That means that AJ can pick and choose that much more. “You almost have to say his manager would be mismanaging him if he were fighting Wilder right now…That fight’s not happening,” he said, asking for forgiveness. Not for awhile, anyway.

Atlas said that if Fury beats Wilder in their rematch, the Fury vs. Joshua bout would be monstrously huge. He said also “don’t think black and white don’t come into it,” that’s still a promotional angle. “You have all those elements!”

–He said that Team Canelo saw that GGG was exposed and had slipped and that’s why they went after the fight with Golovkin.

–Atlas said that the system is so easy to corrupt. “It’s like building a community on toxic ground,” he said. The promoters and the managers being right next to the oversight and sanctioning bodies means that there is no policing, really.

–Atlas spoke on his pairing with Aleksandr Gvozdyk. They made sure to steer clear of Adonis Stevenson’s power, that was the main game plan, the analyst said. “The truth is, they were gonna rob us,” he said, of a potential decision. He made sure to note that he’d like everyone to continue to pray and root for Adonis Stevenson to continue to improve, for the record. And also: Atlas said “that referee didn’t do a good job in that fight.” He said the ref wasn’t in a good position to stop the last punch. Maybe the ref wanted to give the home-towner more leeway to fight on? “That thinking can’t be in anybody in that positions’ thinking,” said the conscience of the sweet and savage science.

–Teddy touched on the Pacquiao vs. Broner fight. “That’s another thing about this friggin’ podcast,” he said, pre-ambling his wish to be putting forth candid talk, not what’s “fashionable, or comfortable or what’s easy.”

“For me, Pacquiao was the only guy fighting that night,” he asserted. Broner was just there looking like he wanted to finish and get that check. Also; Atlas thinks that Broner was doing a put on when he said in ring that he thought he won, aka he was possibly lying. Or, maybe Broner was actually delusional. Maybe he’s so defended against reality that he can’t accurately distinguish between truth and fiction. He talks about a mental place where fact and fiction in one’s mind is blurred. Maybe AB just wanted to survive and get paid…so in that way, he won.

–Atlas also touched on light heavyweight Marcus Browne’s post-fight comments, after he beat Badou Jack on Jan. 18. Browne went at Teddy Atlas, saying that Atlas leap-frogged onto the gym that Atlas’ foundation helped sponsor. The Cop and Kids Gym was there before Atlas got involved, Browne said, so he’d rather people not give Atlas credit, and instead give credit to the Gary Starks and Sharif Younans. “Congratulations to Marcus Browne…I’m happy for the kid, I’m proud that he came out of our gym,” he said, noting that he got help from many folks. “I’ll leave it at that, congratulations. Congratulations.”

–Atlas said that his guy Gvozdyk will fight March 30 on ESPN, and they expect to know the foe at any time. He is now in a camp, with the Nail, eight weeks in Cali.

–The ESPN fixture thinks Canelo will get the better of Danny Jacobs when they collide in May. Body work by Canelo will aid the Mexican measurably. “I think it’s a competitive fight,” Atlas stated. He said he’s happy that Canelo was over-paid to fight Rocky Fielding, and it’s good that this fight will make him earn the moolah.

—And maybe GGG should think retirement. Lot of miles on those tires, said Atlas. “He ain’t getting better,” he said, of Golovkins’ chances against the red-head in a third scrap. “He’s been eroding, the horse is out of the barn,” he said. He took aim at the people who knock him, as a “GGG hater.” “There comes a time when it’s time to look for the door,” he said.

Michael Woods, a Park Slope, Brooklyn resident, was a staff writer at NY Newsday, before joining ESPN The Magazine (2003-2014).  He edited TheSweetScience.com (2007-20015), now publishes NYFights.com, calls fights for Facebook Fightnight Live, which has drawn over 4 million views over a span of 26 events, and does the “Talkbox” podcast for Everlast.