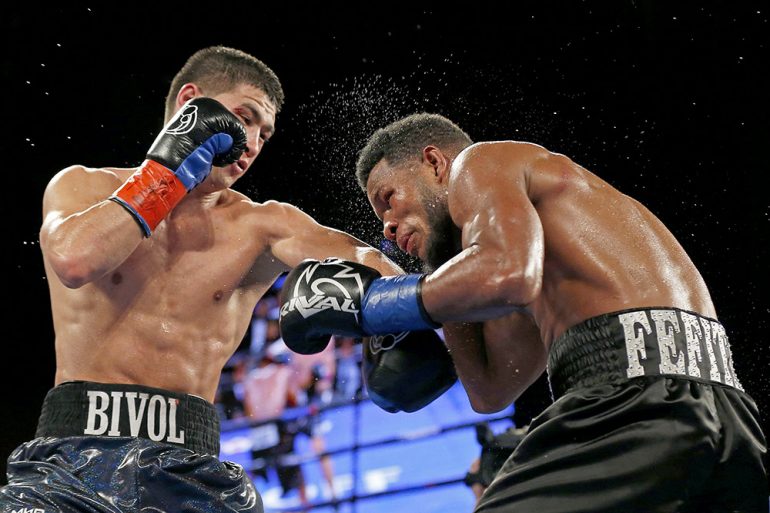 As previously reported by The Ring, Dmitry Bivol will put his WBA light heavyweight title on the line against Joe Smith Jr. and the bout has now found a home at the Turning Stone Resort and Casino in Verona, New York, on March 9.

Bivol, who is rated No. 3 by The Ring at 175 pounds, could face a stiff test from Smith who is best known for ending the legendary Bernard Hopkins’ career in December 2016, and for destroying Andrzej Fonfara inside the opening round of their clash in Chicago six months earlier.

“I want to thank Joe and his team for taking the fight as I think that our styles will make for a great fight, but I will keep my title,” said Bivol (15-0, 11 knockouts). “I’m so happy that my team have come up with a great plan for my future on DAZN, it’s an exciting new chapter in my career and I cannot wait for March 9.

“This is a huge opportunity for me and one I’ll take full advantage of,” said Smith (24-2, 20 KOs). “This is everything that I’ve worked for, really hard, for my whole life, so I’m going to give it everything I’ve got, and come March 9, I will be 100 percent ready to take that title home.”

Hooker, who is rated No. 5 by The Ring at 140 pounds, hopes to produce a solid performance before making a homecoming defense in the summer.

“I can guarantee you that I’m leaving New York City with another ‘W’ in the win column,” said Hooker (25-0-3, 17 KOs). “I’m hungry to get back to competing and I’m going to put on a great show so that I can bring my belt back to Dallas for my next bout.”

“We’re very excited that Mo will be fighting in New York, giving him the opportunity to shine in the biggest city in the world,” Roc Nation Sports boxing promoter Dino Duva said. “He had an unforgettable 2018 and we’re confident that he’ll sustain that momentum in 2019.”

“It’s been a long time coming, I’ve been grinding underground, out of the public eye – so when I come to fight, I go to work and get the job done,” said LesPierre (21-0-1, 10 KOs), who will be taking a massive step up in class.

“I took this fight in a heartbeat. I don’t listen to what people say, some might not think I deserve this shot but come March 9, I will show people that I belong at this level. I’ve moved up the rankings and put the work in – there’s no one out there that works harder than me or wants this more than me. I’ve put myself in position to get to this point and now it’s time to shine.”

This card will be broadcast live on DAZN in the U.S. and Sky Sports in the U.K.

TICKETS ARE ON SALE NOW PRICED FROM $49 VIA TICKETMASTER.COM