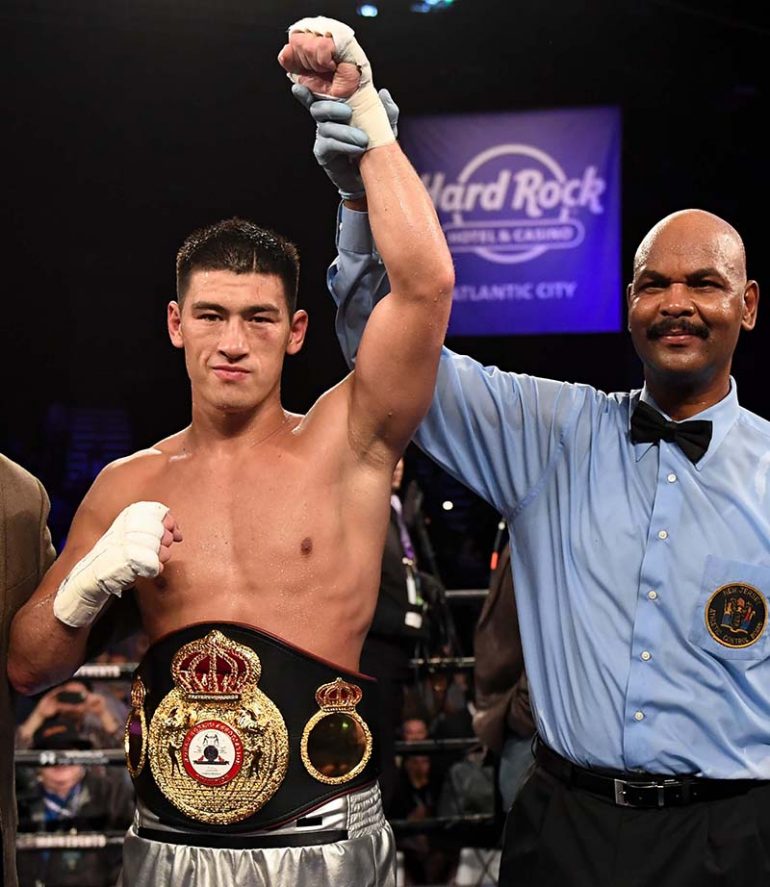 Bivol could present Canelo with a serious challenge. Photo by Matt Heasley
14
Jan
by Mike Coppinger

Dmitry Bivol is nearing an agreement that would see him compete exclusively on DAZN, industry sources told The Ring.

Bivol (15-0, 11 knockouts) was in talks to fight Smith in November, but the Long Islander instead elected to head toward a fight with titleholder Artur Beterbiev. Bivol, 28, ended up fighting former titleholder Jean Pascal, whom he outpointed in November. Smith’s fight with Beterbiev, scheduled for December 15, never came to fruition.

Smith (24-2, 20 KOs) was once again set to fight Beterbiev on DAZN, this time in February. But now, Beterbiev is close to a deal to fight exclusively on ESPN, according to industry sources; he’s unavailable to fight Smith as Top Rank plots his next move.

Part of Smith’s co-promotional pact with Joe DeGuardia and Eddie Hearn promises a title fight, and it’s still being delivered. The fight against Bivol will be Smith’s first title opportunity. HIs career-best victory was an upset knockout of Bernard Hopkins in the legend’s final fight.

Bivol’s pact with DAZN is a coup for the fledgling platform, although The Russian’s arrival is dampened by the departure of Beterbiev. A title unification between Bivol and Beterbiev would serve as a tentpole fight for DAZN, which has been short on signature fights in its infancy.

Gennady Golovkin remains the biggest free agent in boxing, and industry power players are anxiously awaiting his decision. The best free agent after him was Bivol, who’s now off the market.

Bivol is rated No. 3 by The Ring. Smith, who’s No. 9 at 175 pounds, is the only other viable opponent for him aligned with DAZN.

All the other players at light heavyweight fight exclusively on ESPN. There’s Eleider Alvarez and Sergey Kovalev, who rematch February 2 on ESPN. Alvarez holds a title and is rated No. 1 by The Ring. And then there’s Oleksandr Gvozdyk, who defeated Adonis Stevenson for the lineal championship in November.

Super middleweight titleholder Gilberto Ramirez is expected to climb to 175 pounds for his next fight, and he’s promoted by Top Rank. Beterbiev’s deal with ESPN will only bolster Top Rank’s impressive collection of boxers in one of the sport’s deepest weight classes.

Beterbiev (13-0, 13 KOs) has battled with promoter Yvon Michel for years. The 33-year-old puncher fought on ESPN in November 2017 before Michel won a legal battle. A recent development allowed Beterbiev to jettison DAZN before his three-fight co-promotional deal with Hearn and Michel expired (he had just one fight on the platform.)

Beterbiev was signed with advisor Al Haymon, and his promotional deal with Michel was tied to his partnership with PBC, according to sources. After Haymon released Beterbiev, he was free and clear to sign somewhere else. Michel will still be involved, according to sources, as Top Rank looks to build Beterbiev into an attraction in Montreal, where the Russia native is based. Michel is far and away the most prominent promoter in Canada.

We’re now farther away than ever from an appetizing fight between Bivol and Beterbiev, but a wealth of opportunities await the latter over at ESPN.