George Kambosos Jr. looks to break out on Pacquiao-Broner card 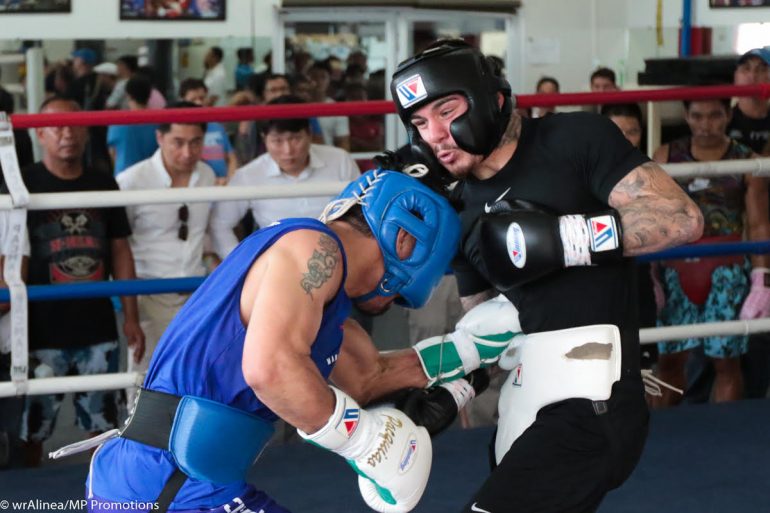 Australian lightweight George Kambosos Jr. will try to steal the show Saturday when he takes on Rey Perez on the undercard of the Manny Pacquiao-Adrien Broner.

For the 25-year-old Kambosos (15-0, 9 knockouts) this will be his second consecutive appearance on a Pacquiao event. Kambosos knocked out JR Magoo in two rounds this past July in Kuala Lumpur, Malaysia on the Pacquiao-Lucas Matthysse card.

“I’m so excited to fight on this card,” Kambosos told RingTV.com by phone. “As a young kid I dreamed of fighting at the MGM Grand in Las Vegas where all the big fights are.”

It’s not lost on Kambosos that only a few years ago he was appearing on small club shows in Australia, and he’s hoping to challenge for his first world title later this year.

“My moment is finally here and I need to make a big statement,” Kambosos said. “This is the level I want to be at and it’s very hard to get here so I need to do everything possible to stay here.”

Kambosos has been part of Pacquiao’s three training camps starting with Pacquiao’s controversial loss to Jeff Horn in Australia. The surreal experiences for Kambosos include coming out to train amidst a throng of fans waiting daily to see Pacquiao, to death threats from terrorist leveled against Pacquiao, who also serves a senator in the Philippines.

“That was scary,” Kambosos recalls. “The army did a great job protecting us but in the back of my mind when we were running along the mountains I kept thinking ‘What if a sniper tries to take him out?’ We had big runs, unbearable heat and the death threats, but it was a great time. It was all worth it to learn from a legend like Manny and to watch how hard he works and how badly he still wants it is inspiring.”

Kambosos felt honored to be invited back for Pacquiao’s camp for the Matthysse bout and believes both men are benefitting mutually from the relationship.

“There’s no question being around Manny is going to help propel me to a world championship,” Kambosos said enthusiastically. “I’ve yet to be in there with someone who hits as hard as him or has his speed. For Manny I know it helps him to have a young, hungry fighter in there pushing him to the max. We will see the vintage Manny Pacquiao against Adrien Broner.”

Kambosos and Pacquiao have sparred over 200 rounds together and the ambitious fighter Australian credits Pacquiao with helping him fine tune his mechanics in order to prepare for larger fights on the horizon. Perez (24-10, 8 KOs) was added as Kambosos’ opponent after the original opponent Rolando Chinea dropped out last week. Kambosos is targeting the winner of the vacant IBF lightweight title fight between Richard Commey and Isa Chaniev or even hoping to get a crack at lightweight king Vasyl Lomachenko.

“I’m explosive and get my knockouts, but I am also a versatile fighter,” Kambosos argues. “A guy like Lomachenko who is great but there is a blueprint for how to get him. My angles are the same as his and I have the power to get him. I want to fight Lomachenko or whoever wants to lose their belt to me.”

Back when Kambosos first started working with Pacquiao in Australia he met some criticism from local media outlets and fighters for trying to help Pacquiao defeat a fellow Australian. Kambosos nicknamed himself the “bad guy of Australian boxing.”

“I don’t think that’s the case anymore,” Kambosos said through a chuckle. “I have turned my haters into my fans with the way I fight and guess what I took them in with open arms. That’s how it should be. Some people will like me and some won’t because I am aggressive and I say what I mean.”

Among the many takeaways Kambosos gained from Pacquiao is the Filipino star’s work ethic and drive.

“You want to know what an ambassador to the sport of boxing looks like,” Kambosos points out. “Christmas Day we were up at 6 AM running, then back to work out. New Year’s Day same thing. This man has millions of dollars and still works this way. It’s unbelievable.”