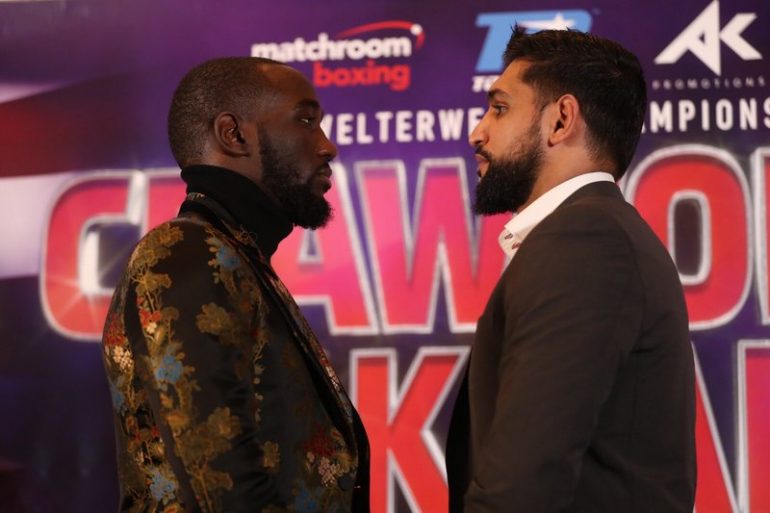 LONDON – Terence Crawford was in London on Tuesday to announce his April 20 fight with Amir Khan.

A venue will be confirmed later in the week with Top Rank, Crawford’s promoter, confirming it will either be at New York’s Madison Square Garden or the MGM Grand in Las Vegas.

“It let’s you know how much confidence he has in my ability,” said Crawford, who when asked if Khan was a top five welterweight confessed he would only put him in the top six or seven. “I worked very hard to get where I am now and to be put in the categories with those great fighters, it shows where my career is going.

“It’s going to be a great fight. There’s going to be a lot of great fireworks in there. He’s a great fighter. I always said he was and we said it’s a tough fight for us if we ever met. When I was at 135 he was at 140 and when I moved up he moved up so we never had the opportunity but now we’re going to find out what will happen.

“Everybody knows he’s fast, he’s a fast puncher and a great boxer but I think my smartness and the way to adjust is what’s going to lead me to victory.”

“I never overlook any opponent whatsoever. He’s still dangerous, still fast, still got the experience and he’s spent more time at welterweight than me, we’re taking no shortcuts in this fight.”

Then, talking about his ring IQ, Crawford – who admitted he admired the likes of Floyd Mayweather, Pernell Whitaker and Roy Jones – said: “There’s never been a fighter I can’t figure out.”

Khan, who opted to meet Crawford over domestic rival Kell Brook, described it as “a legacy fight.”

“It’s a brilliant fight,” he continued. “He’s one the best fighters in the world, it’s a great opportunity so I’m going to take it. It [victory] will put me up in the world pound-for-pound rankings. Styles make fights but I need fights I want to win, where I have to prove myself, and this is a fight where I have to prove myself. It’s not like I’m past my best. I’ve still got my best fights ahead of me. If I take it lightly I will get hurt, but I can win the fight and that’s why I’m taking it.”

Khan added that he was both comfortable and unbeaten at the 147-pound limit and confirmed that he would be back training with Virgil Hunter, having had a brief spell with Joe Goossen.

“He [Virgil]’s also happy with me taking this. He knows it’s dangerous but he knows I’m capable of winning. As long as I stay focused for the entire fight it’s a good fight for me.”

Matchroom Boxing CEO Frank Smith, on hand while Eddie Hearn is in meetings in America, said talk should be of Crawford-Khan, not Khan-Brook.

“Today is about this fight and you can’t knock him,” said Smith of Khan’s last bout in a three-fight deal with the Bolton man.

“Who knows, maybe Kell Brook happens down the road but that’s for another day.”

Khan was asked about the match with the Sheffield man. “I think it’s still there,” he insisted. “It’s still a fight I’d love to have.”

Arum said people often enquire exactly how good Crawford is, along with another of his clients Vasiliy Lomachenko.

“People ask me about both of these guys because they’re both special and when I talk about Terence I say he’s the best welterweight I’ve seen since Sugar Ray Leonard and I would make him comparable against Ray, he’s of that calibre. I really believe that Terence matches up with the ability of Sugar Ray Leonard.”

For now, though, Crawford has to match up to Khan.

“Amir Khan in the U.S.A. is known for never ever having a poor performance,” Arum went on. “He’s a gutsy fighter, he has skills of the top level, he’s a master boxer with very fast hands but every fight he’s in people want to see because he’s a true warrior and he gives a great account of himself in the ring.”