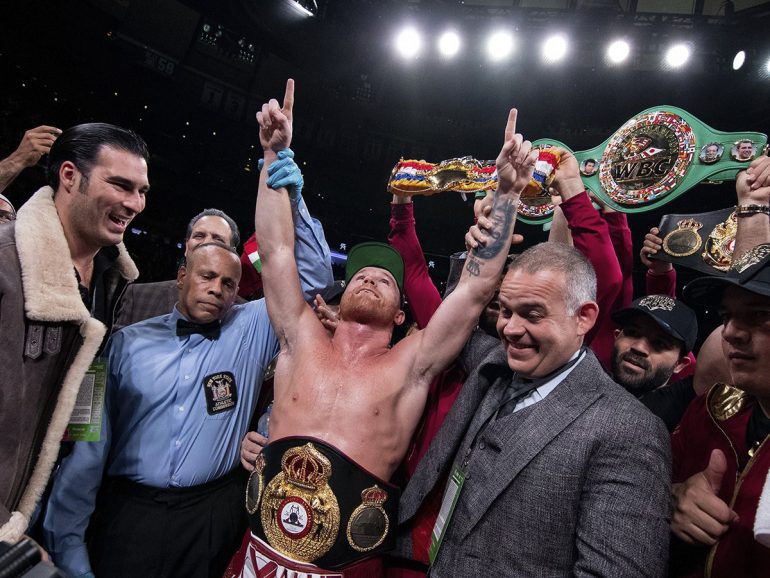 It’s a long journey to Madison Square Garden from the Arena Chololo Larios in Tonala, Mexico, where 15-year-old Saul “Canelo” Alvarez made his debut as a professional fighter thirteen years ago.

Canelo is now boxing royalty. At age 28, he has crafted a 51-1-2 (35 knockouts) ring record and shown a willingness to go in tough. His financial ledger is equally imposing. Canelo puts people in seats and engenders more pay-per-view buys than any other boxer today. On December 15, his fistic and financial might were on display against Rocky Fielding at Madison Square Garden.

Canelo’s 53 previous bouts had been contested in Mexico (35 times), Nevada (11), Texas (3), California (3), and Florida (1). His decision to fight in New York was part of a larger branding effort and marked the start of a lucrative contract with DAZN.

On October 17, it was announced that DAZN, Canelo, and Golden Boy (Alvarez’s promoter) had entered into an agreement to stream Canelo’s next eleven fights on DAZN platforms throughout the world with DAZN paying a minimum of $365 million for the honor. DAZN will also stream an unspecified number of less prominent Golden Boy fight cards during the five-year contract term and otherwise dispose of rights to Alvarez’s fights in countries where it doesn’t have a streaming platform.

Canelo’s purse for fighting Fielding was $15 million. His pay for future outings will depend upon the opponent and various benchmarks regarding DAZN’s performance. The minimum purse for each of these fights (likely to be contested on Cinco de Mayo and Mexican Independence Day weekends) will be $35 million.

Michael “Rocky” Fielding, age 31, is from England and sported a 27-1 (15 KOs) record. He isn’t a quality super-middleweight. But he’d knocked out someone named Tyron Zeuge on July 14, after which, in the la-la land known as the World Boxing Association, he became the “regular” WBA 168-pound world champion. That placed him behind Callum Smith, who destroyed Fielding in one round three years ago and is the real WBA 168-pound world champion.

Fielding brought two things to the Canelo-Rocky promotion: his belt and his nickname. Beyond that, he could have been any fighter. He was the B-side in a promotion in which only the A-side mattered.

Rocky comes across as an amiable man (the Brits might call him a “chap” or “bloke”) who’d be pleasant to sit with while watching a soccer game on television. And by all accounts, he’s a decent man. The general sentiment among the media was the hope that he’d be well-paid for his effort and not get too badly beaten up.

Alvarez had a huge edge over Fielding in terms of natural athletic ability. It was also understood that Canelo has better ring skills, hits harder, is faster, and takes a better punch. Against all that, Fielding (6-feet-1-inch tall) could claim a five-inch height advantage and three-inch edge in reach over Canelo.

Jamie Moore, who trains Fielding, tried to put an optimistic spin on things. During a December 3 media conference call, Moore declared, “A lot of fighters, especially the ones who he spars, say you don’t realize how good Rocky is or how unorthodox he is. I don’t think Rocky’s record really tells the tale of how hard he punches. A lot of the guys he boxed early on, you saw go in there to survive so they were able to fiddle their way through. And there’s a lot of unanswered questions regarding Alvarez moving up to super-middleweight. The height and reach advantage what Rocky’s got is huge.” 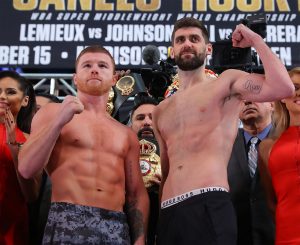 Canelo played along with that theme, saying, “It’s not a secret that I’m a better fighter and that I’m more experienced. But I’m taking a risk by entering into the comfort zone of a champion at his weight. Boxing is the sport where you should be least overconfident. One punch can change everything.”

But reality and fantasy are two different things. Great Britain has produced some remarkably good fighters over the years. Fielding fit into a different category: the plucky give-it-everything-he-has sacrificial lamb. He’s tall and thin and looked as though a well-placed body shot from Canelo might break him in two. He’s an arm-puncher who doesn’t get much leverage on his punches. When asked about his power and build at a media sitdown two days before the fight, he conceded “I’m not like Hulk Hogan,” before adding, “I’m going to give it everything I have to get the victory.”

At the final pre-fight press conference, Chepo Reynoso (who manages Alvarez) proclaimed, “Madison Square Garden, be prepared. Canelo is coming to conquer you.”

On fight night, Canelo Alvarez arrived at his dressing room at Madison Square Garden at 7:50 PM. As an elite fighter, he’d been given the New York Knicks changing room – part of a complex that includes a players lounge, video room, head coach’s office, trainer’s room, and multiple shower stalls.

The dressing room was round, twenty feet in diameter with recessed lighting above. Two imitation leather sofas and fourteen black cushioned folding metal-framed chairs ringed a plush blue carpet with a large blue-orange-and-white Knicks logo emblazoned in the center. Backdrops with logos for Golden Boy, Tecate, and Alvarez stretched from just above the floor to the ceiling blocking off the Knicks cubicles and wood-paneled walls. Two large Mexican flags had been hung facing each other.

Canelo lay down on one of the sofas with a towel beneath his head, took out his smart phone, and checked for messages. One of the backdrops was moved aside so he could watch the undercard fights on a large flat-screen television attached to the wall, but there was no DAZN signal.

Ramiro Gonzalez (Canelo’s publicist and friend) handed Alvarez a smartphone with the DAZN app already downloaded so he could watch the action. Katie Taylor was en route to winning every round on each judge’s scorecard against Eva Wahlstrom.

Chris Mannix came in to conduct an interview with Canelo for the DAZN stream.

“Do you want to do this in English?” Mannix asked.

“I understand,” Canelo told him. “But I answer in Spanish. Is okay?”

When the interview was done, Canelo checked again for messages on his smartphone.

Almost no one in the room was talking. Those who did conversed in quiet tones.

Golden Boy president Eric Gomez came in and shook hands with everyone.

Five minutes later, Dr. Gerard Varlotta entered to administer the New York State Athletic Commission’s standard fight-night physical examination. Canelo had a bit of swelling and a small scab beneath his right eye, the result of a recent sparring session. A more severe cut suffered above his left eye in the second Golovkin fight had healed.

“I had hair your color when I was young,” Dr. Varlotta (whose nickname is Rusty) informed the fighter.

The mood was far more relaxed than it had been in the dressing room prior to Canelo’s most recent two fights against Gennady Golovkin.

At 8:40, Edith Marquez (a singer and actress who would sing the Mexican national anthem later in the evening) came in to wish Canelo well. Her gown demanded attention, and she got it. Chepo rose from his chair and sang a love song for her. Then, one by one, the members of Team Alvarez posed for pictures with her.

More relatives, some with toddlers, came and went. Canelo hugged each of the arrivals, paying special attention to his daughter, Maria Fernanda. Three months earlier, an hour before his rematch against Gennady Golovkin, Canelo had walked Maria around his dressing room at the T-Mobile Arena, holding her arms above her head to steady her legs. Now she could take several steps on her own before losing her balance.

Garcia knocked Rodriguez out in round five. That was followed by Sadam Ali vs. Mauricio Herrera.

Mexican legend Julio Cesar Chavez came in to conduct an interview with Canelo for Spanish-language television. 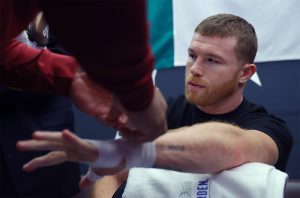 At 9:25, Eddy Reynoso began taping Canelo’s hands. Nigel Travis, who was in the room as Rocky Fielding’s representative, objected to what he argued was illegal stacking (layering gauze and tape in a forbidden way). The issue had been discussed (and presumably resolved) at a meeting with New York State Athletic Commission director of boxing Matt Delaglio the previous day. Now executive director Kim Sumbler and deputy commissioner George Ward were called in to further resolve it. There was a slight adjustment to Canelo’s handwraps and Travis left grumbling.

Canelo lay down on a rubdown table. Soft Latin music sounded in the background. Munir Somoya stretched him out for fifteen minutes. Then Canelo rose from the table and danced briefly with Chepo in his arms to laughter all around.

Canelo gloved up, then pounded a round black leather cushion that Eddy Reynoso was holding. By 10:40, he was ready for battle. But Tevin Farmer vs. Francisco Fonseca (the next-to-last fight of the evening) was only in round five.

Now Canelo was marking time. He paced and shadow-boxed. There was some padwork. Farmer-Fonseca ended with Farmer winning a unanimous decision.

Three national anthems were next up on the DAZN stream. Canelo paced back and forth, rotating his arms during the singing of God Save the Queen and The Star-Spangled Banner. But he stood at attention as Edith Marquez sang the Mexican anthem.

Earlier in the evening, as many as forty people had been in the room. Now only Canelo, his cornermen, and two New York State Athletic Commission inspectors remained.

At 11:30, three hours and forty minutes after entering his dressing room, Canelo left for the ring. It was a fight he was expected to dominate. But once the bell rings, there are no guarantees in boxing.

There’s a huge fan base for Puerto Rican boxers in New York. Not so for Mexican fighters. But the sell-out crowd of 20,113, stood testament to Canelo’s drawing power. In the next hour, he would earn more money than Joe Louis made in his entire ring career and more than all but a few elite fighters have made for a single fight. 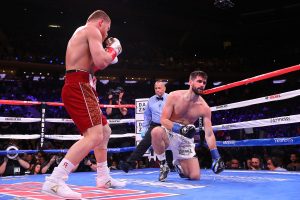 Fielding entered the ring to Neil Diamond’s Sweet Caroline. This was his time on a world stage. Canelo was next, walking down the aisle to a thunderous roar and chants of “Mexico! Mexico!”

The “key to victory” was that Fielding didn’t belong in the ring with Canelo. Rocky had enjoyed the build-up to the fight. “It was a great week,” he said afterward. “Met some great people. I lived a dream.”

Then savage reality intervened and the dream turned into a nightmare.

Once the bell rang, it was clear that Rocky had no chance. His jab was ineffective; he simply couldn’t land it. At times, he traded power punches. But it was as though he had a sling-shot and Canelo was armed with a Magnum .357.

Canelo attacked with a brutal body assault, dropping Fielding with hooks to the liver in rounds one and two. Two minutes 15 seconds into round three, when Rocky brought his elbows down to protect his body, a thudding right hand up top dropped him for the third time. Twenty seconds later, another crushing hook to the body put him on the canvas for the fourth time, and referee Ricky Gonzalez appropriately stopped the slaughter.

“He’s strong,” Fielding said afterward. “The body shots were really tough. He placed his shots well, and he caught me. I gave it everything, and the better man won. Hats off to Canelo. I respect him.”

Thomas Hauser’s new email address is [email protected] His most recent book – Protect Yourself at All Times – was published recently by the University of Arkansas Press. In 2004, the Boxing Writers Association of America honored Hauser with the Nat Fleischer Award for career excellence in boxing journalism.