Overshadowed: Adonis Stevenson-Oleksandr Gvozdyk could be best fight of weekend 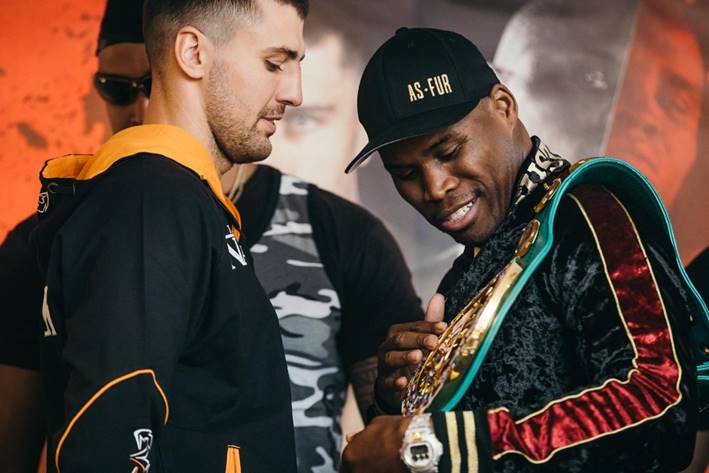 The fight has flown under the radar as the boxing world is transfixed on the heavyweight championship fight, but two weight classes below, there’s an equally compelling matchup, even if it won’t reach nearly the same magnitude.

Oleksandr Gvozdyk travels to Quebec City on Saturday in a bid to join longtime friends — and managerial stablemates — Vasiliy Lomachenko and Aleksandr Usyk as lineal champions from Ukraine. Gvozdyk has a tall task in front of him: Adonis Stevenson, whose power at 175 pounds is every bit as devastating as Deontay Wilder’s, the man who meets Tyson Fury later that night in Los Angeles.

Stevenson-Gvozdyk will be televised on Showtime (7:45 p.m. ET) — and streamed on YouTube — as a free appetizer for the heavyweight championship fight on Showtime Pay-Per-View. So while Wilder and Fury soak up all the media attention, don’t forget about the light heavyweight championship fight, a bout that will shape one of the best divisions in the sport for years to come.

Gvozdyk (15-0, 12 knockouts) isn’t delusional: he knows he’ll have to be a lot better than he was in February if he’s going to withstand Stevenson’s power. Gvozdyk looked pedestrian at times in going the 12-round distance with the unheralded Mehdi Amar. Looking for answers, Gvozdyk linked up with Teddy Atlas ahead of his first crack at a title. Well-known for his motivational tactics, Gvozdyk says Atlas has guided him to “become the best version of The Nail.”

“I have one of the greatest trainers in the history of boxing so I’m very confident,” said Gvozdyk, The Ring’s No. 6 light heavyweight. “Adonis is a great fighter. He’s a dangerous southpaw and this is a real step-up for me but it’s my time. … My last fight wasn’t my best performance, but I’ve learned from that and moved on.”

The 31-year-old, who now makes his home in Oxnard, California, will be competing outside the United States for the first time as a pro, but he owns a wealth of experience fighting internationally from his accomplished amateur career. Gvozdyk won a bronze medal at the 2012 Olympic Games, and he’s displayed impressive power in the paid ranks.

He’s yet to face anyone of consequence. That, of course, will change when he meets Stevenson, The Ring’s No. 3 light heavyweight. Stevenson (29-1-1, 24 KOs) will be making the 10th defense of his light heavyweight championship, and he’ll do so from the confines of home.

“I have wanted to fight for a world title for a very long time, and the opportunity is finally here,” said Gvozdyk, who is promoted by Top Rank. “Stevenson is a great champion, but his time is up. It doesn’t matter to me where I fight. The Canadian fans will boo me when I enter the ring, but the boos will turn to cheers after I show them what I am made of.

“Adonis has talked about fighting the other world champions after he fights me. He should worry about the challenge in front of him. I am coming to Canada on a mission.”

Stevenson might be 41 years old, but his power remains vaunted. He proved in May that he still has the resolve to hang tough in the face of danger. Badou Jack was pummeling Stevenson when, bam, Superman drilled him with a right hand to the midsection. Jack’s promoter, Floyd Mayweather, believed the shot broke his fighter’s ribs.

The punch saved Stevenson’s title; he eked out a draw on the scorecards. Now, he looks to jump back in the win column against another tough foe.

“Saturday is a big fight. I’m not underestimating Gvozdyk,” Stevenson said. “I know he’s a good fighter and he’s hungry. He’s trained very hard to get my title. But everybody who comes to my home in Canada always wants my title, but it’s never happened and it’s not going to happen now.

If Stevenson and Gvozdyk both match their words in the ring, their fight just might end up stealing the night.