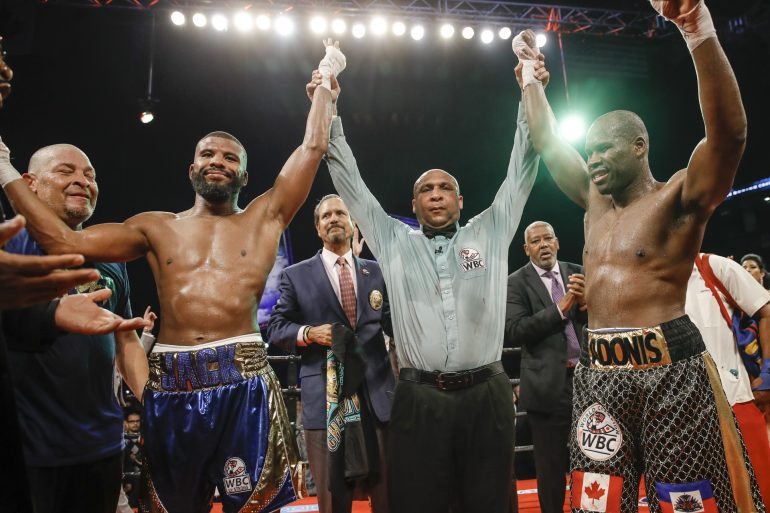 Esther Lin/Showtime
19
May
by Mike Coppinger

TORONTO — Adonis Stevenson wobbled as the final bell rang, blood pouring out of his nose and mouth.

After an incredibly grueling second half where both fighters were hurt by damaging blows on several occasions, the see-saw battle ended in a fitting majority draw. One judge scored it for Jack, 115-113, but the other two scorecards were a 114-114 stalemate. THE RING also scored it 114-114.

Stevenson retained his 175-pound WBC title on Saturday before 4,728 at Air Canada Centre, and after years of criticism for fighting weak opposition, he proved that even at age 40, he remains one of the sport’s elite fighters.

He also showed off tremendous balls and courage in a Showtime-televised fight that lifted the stock of both boxers, and now, they’ll need another 12 rounds to settle the score.

“I went to the body and saw that he was fatigued,” said Stevenson, the second-longest reigning champion in boxing, who was making the ninth defense of his title. “I had to keep the pressure on him. He’s a slick fighter, a two-time world champion, but I felt I won the fight.

“I used both hands. I touched him a lot with the right hand on the body and slowed him down. He tried to come and attack me. I feel like I won the fight but I’ll give him a rematch if he wants it.”

Naturally, that’s exactly what Jack wants. He believes if he had 10 or 15 more seconds, the WBC title would be around his waist, not Stevenson’s.

After all, Stevenson (29-1-1, 24 knockouts) could barely stand when the fight ended, and Jack swears the champion walked to the wrong corner when the bout concluded, proof in his mind that the Canadian was spent.

Stevenson’s face was a bloody mess as the fight wore on, and Jack was relentless with his attack. Uppercuts, right hands on the inside, body blows. Jack continued to find the target after a slow start that likely cost him the fight.

Jack (21-1-4, 13 KOs)won just two of the first six rounds in the eyes of two judges, and only one round on the third card as he cautiously sat on the outside and ate Stevenson left hands.

” … After three or four rounds he didn’t really hit me. He didn’t really do nothing. I knew I was going to break him down but he’s a tough guy, he can take a punch, but I thought I won the fight.” 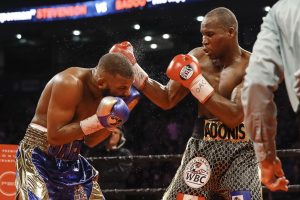 But he didn’t. Neither man truly pulled away in a fight of the year candidate that featured several momentum shifts.

Stevenson, a southpaw who resides in Quebec, applied constant pressure early on and committed to the body attack. Regarded as one of the sport’s most devastating punchers, “Superman” connected on several flush left hands early on, but Jack took them well.

Jack finally came alive in Round 4. The 34-year-old Swede seemed to find the proper distance and he was able to connect on a series of right hands that caught the champion’s attention.

And perhaps that was a bad thing, because Stevenson came out the following round with renewed vigor. He rocked Jack with a bevy of lefts and rights and had Jack staggering following a punishing body attack.

A left uppercut hurt Jack in Round 6, and Stevenson tried to finish him off. The Haiti native was criticized as a one-handed fighter, but he nicely set up his shots with his jabs and connected on plenty of right hands, too. “To be honest, his right hand was better than his left hand,” Jack admitted.

Stevenson had expended a ton of energy trying to finish off his battered foe and Jack capitalized in Round 7. The tide turned when Jack was able to sneak in his right hand, and Stevenson was sent reeling. Now, it was Jack who was the aggressor looking to close the show.

He hammered Stevenson with power shots as he continued to ratchet up the pressure, but Stevenson dug deep and hung in there, blood spewing out of his mouth with each crushing blow.

Stevenson was forced to hold on for dear life, and Jack’s promoter, Floyd Mayweather, taunted the hometown fighter at every turn. “You Superman, stop crying you little bit–. All you do is hold!”

Jack continued to batter Stevenson over the next two rounds, and it appeared the champion could fall over at any moment. But he somehow stood up to the pressure, although Stevenson unanimously lost Rounds 7, 8 and 9.

An overhand right followed by a left uppercut shook Stevenson again, and he seemed not only hurt, but exhausted, mouth wide open as he sought an equalizer that would shift the matchup back in his favor.

He found the fight-changing shot in Round 10 after absorbing a massive left hook from Jack early in the frame. Stevenson rebounded with a series of shots that had Jack in big trouble, and when Round 11 began, Stevenson bolted off his stool and unloaded with punch after punch, sensing the moment.

A right hand to the body nearly dropped Jack, and Mayweather admitted he thought the punch broke his fighter’s ribs. “He hurt me but I’m in great shape,” Jack said. “I have the heart of a lion.”

After Stevenson emptied his clip, the challenger stormed back with a combination that sent more blood flying through the air, and Jack actually took the penultimate round on one of the judge’s scorecards.

Jack picked up where he left off in the final round and went for broke. Stevenson was on unsteady legs as the clapper signaled 10 seconds remaining in the fight, and Jack broke through with a bunch of shots that found their mark, but Stevenson was still standing at the final bell.

“I know Badou Jack looked for my left hand so that’s why I used my right hand,” said Stevenson, who revealed he was battling a cold. “It surprised him. I’ve got two hands now. I think I won this fight but draw is OK and I keep the title and the title is going to say in Canada. Anybody who wants to fight me, you have to come to Canada.”

With Stevenson’s ability to enter the U.S. in question due to a felony conviction more than 20 years ago, the rematch would likely need to take place in Canada.

And after a fight like this, waged at the highest level with no clear winner, the encore could prove to be even better.