Jason Moloney reflects on WBSS lessons, favors Inoue to win it all 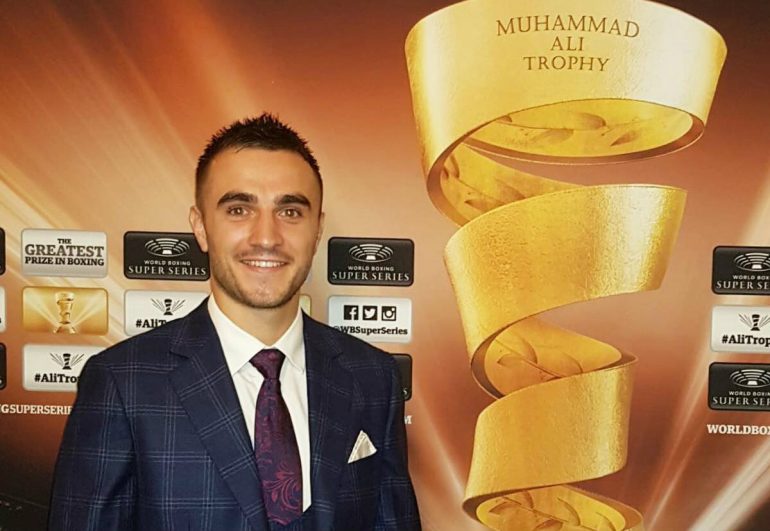 NEW YORK – Jason Moloney may not have been headlining this night at Madison Square Garden, but his black eyes which lingered from the previous week’s war instantly gave away to those in the building that he was a prizefighter.

The 27-year-old Australian boxer was in attendance at the Danny Jacobs-Sergiy Derevyanchenko fight Saturday night with his fiancee’ Jorja as part of a post-fight vacation in the States following his narrow points loss to IBF bantamweight titleholder Emmanuel Rodriguez in Orlando, Florida in the World Boxing Super Series.

Moloney fell short by a narrow split decision, but felt as confident as ever that he’ll eventually get to raise a world title belt over his head.

“I was obviously devastated that I didn’t get the decision. I’m not world champion, I don’t have the belt around my waist. But it was a great experience, a fight I’ll definitely learn a lot from. We’ll just take away a few of the positives. We’ll keep getting better, we’ll keep improving, and next time I get my opportunity I won’t let it slip and become world champion,” said Moloney (17-1, 14 knockouts).

Rodriguez, who was making his first defense of the belt, got out to a quick start, beating Moloney to the punch consistently with his quick counters. The momentum began to turn in the middle rounds as Moloney’s work rate increased and Rodriguez retreated more frequently to the ropes.

“I thought he’d come out sharp, and I thought the first couple of rounds may be 50-50 which is what it was,” said Moloney.

“I was putting him under a lot of pressure and was starting to land some shots to really break him down. Obviously I probably started a bit slow looking back now, in hindsight I need to start a little bit faster and win some of those earlier rounds.”

Moloney is still keeping close tabs on the tournament, just in case someone falls out due to injury and an alternate is needed.

The win earned Rodriguez a second round showdown with pound-for-pound candidate Naoya Inoue next year. Moloney figures Inoue is rightfully the favorite to win it all, but thinks too many of his opponents are beaten mentally before the bell rings to know just how good Inoue is.

“They probably pay him too much respect and let him fight his fight. If we had that opportunity we wouldn’t do that. We’d take it to him and make it our fight,” said Moloney.

“I don’t think Inoue is as invincible as people think he is.”

On the other side of the bracket, WBO bantamweight titleholder Zolani Tete, who skated past Russian upstart Mikhail Aloyan in his opening bout of the tournament, will face the winner of next week’s Ryan Burnett-Nonito Donaire Jr. WBA bantamweight title fight in Scotland. While Tete, a rangy southpaw from South Africa, has earned acclaim as a potential runner-up in the tournament, Moloney believes the Burnett-Donaire winner would likely beat Tete to earn a spot in the final.

The only belt not in the tournament is the WBC title, which was stripped from Luis Nery after he failed to make weight for his rematch against Shinsuke Yamanaka. The vacant title will be filled by the winner between Rau’shee Warren and Nordine Oubaali.

Jason isn’t the only fighter in the family hoping for a title fight: twin brother Andrew (18-0, 11 KOs) is rated in the top-15 of all four major sanctioning bodies as well.

“These are the big fights that we both want. We wanted to be on the big stage, wanted to fight for titles for a long time. It’s a slow progression getting here, and now we’re here,” said Moloney.

“Obviously I fell just short this time but I’m gonna just keep working and hopefully I’ll get another opportunity soon. I’m confident we’ll both be world champions very soon and hopefully we’ll hold onto those belts for a long, long time.”