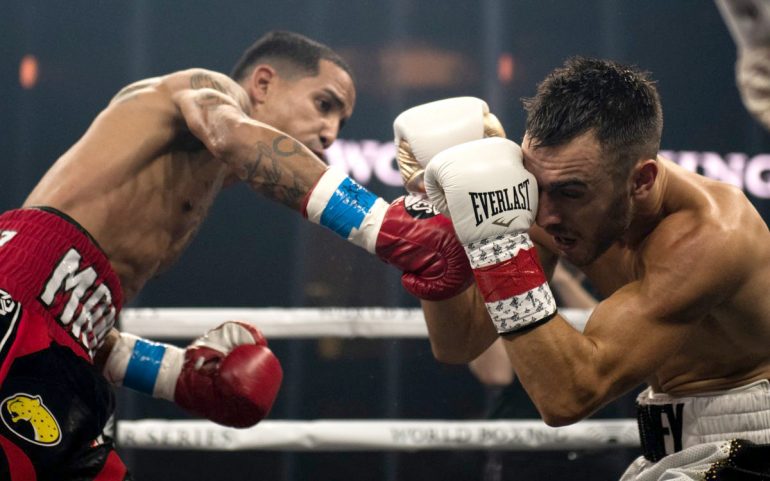 It appeared in the early rounds as if Emmanuel Rodriguez was on his way toward a statement-making victory over Jason Moloney, with his timing a beat sharper and his combinations crisper. Naoya Inoue, the pound-for-pound candidate who awaits the winner in the next round of the World Boxing Super Series, was sitting at ringside, expressionless.

The fight looked like it was trending toward Rodriguez as the seventh round progressed and he landed cleaner combinations. But Moloney, the mandatory challenger for Rodriguez’s IBF bantamweight title, hadn’t traveled to Orlando from Australia just to see Mickey Mouse.

By the final four rounds it was Moloney pressing forward, his fighter’s heart and elite conditioning propelling him forward as Rodriguez tried in vain to keep pace and make it to the final bell. 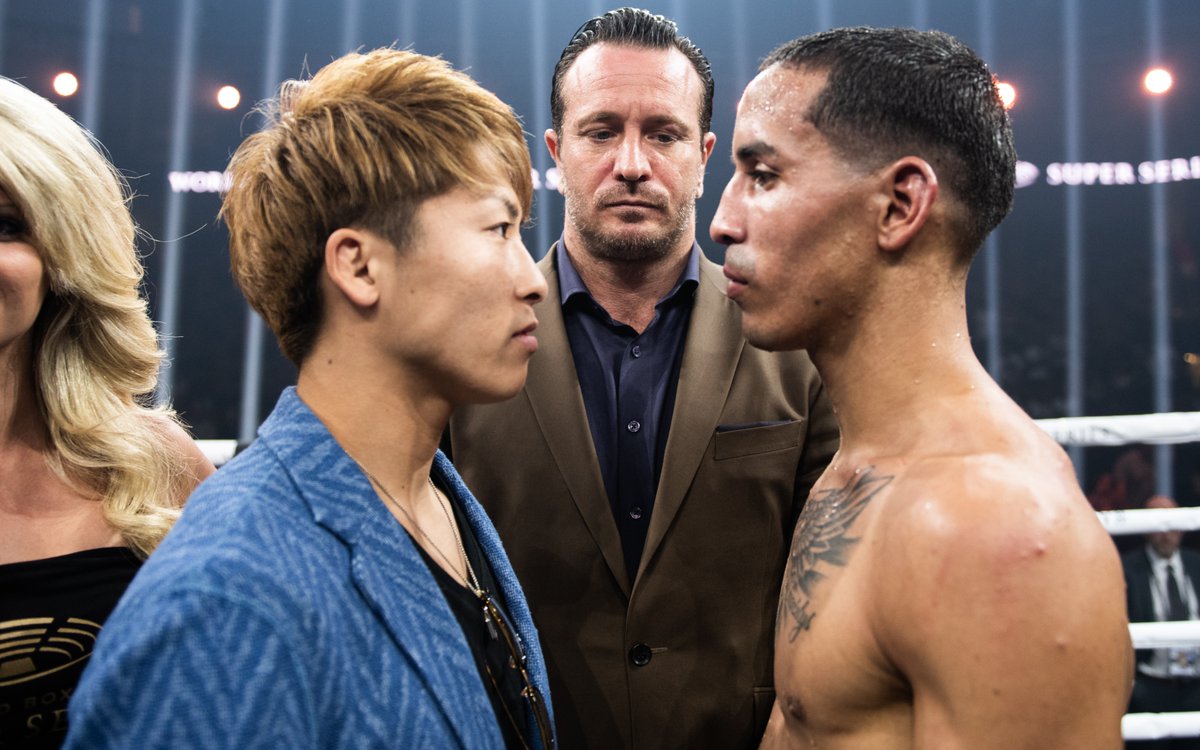 Fatigued yet still unbeaten, Rodriguez (19-0, 12 knockouts) of Puerto Rico had barely a moment to celebrate his first defense of the title belt he won in May before he had to meet face-to-face with Inoue (17-0, 15 KOs) at center-ring. Inoue had said following his first-round knockout of Juan Carlos Payano on October 7 that his next fight will likely be in the United States, and clarified on this night that it would take place early in 2019.

In the co-feature, Yuniel Dorticos didn’t get the knockout he’s accustomed to scoring but advanced to the semifinals of the WBSS cruiserweight tournament with a unanimous decision over Mateusz Masternak. The scores were 115-113 on two cards and 116-112 on the third.

The fight was the first for Dorticos (22-1, 21 knockouts) since his taxing 12th-round stoppage against Murat Gassiev in last season’s semis, and just the first time the Cuban had been stretched to the scorecards since his 2014 fight against Edison Miranda. Masternak (41-5, 28 KOs) of Poland snaps a five-fight winning streak with the defeat.

Dorticos will next face American Andrew Tabiti (17-0, 13 KOs), who advanced in the tournament last week with a unanimous decision win over Ruslan Fayfer in Russia. 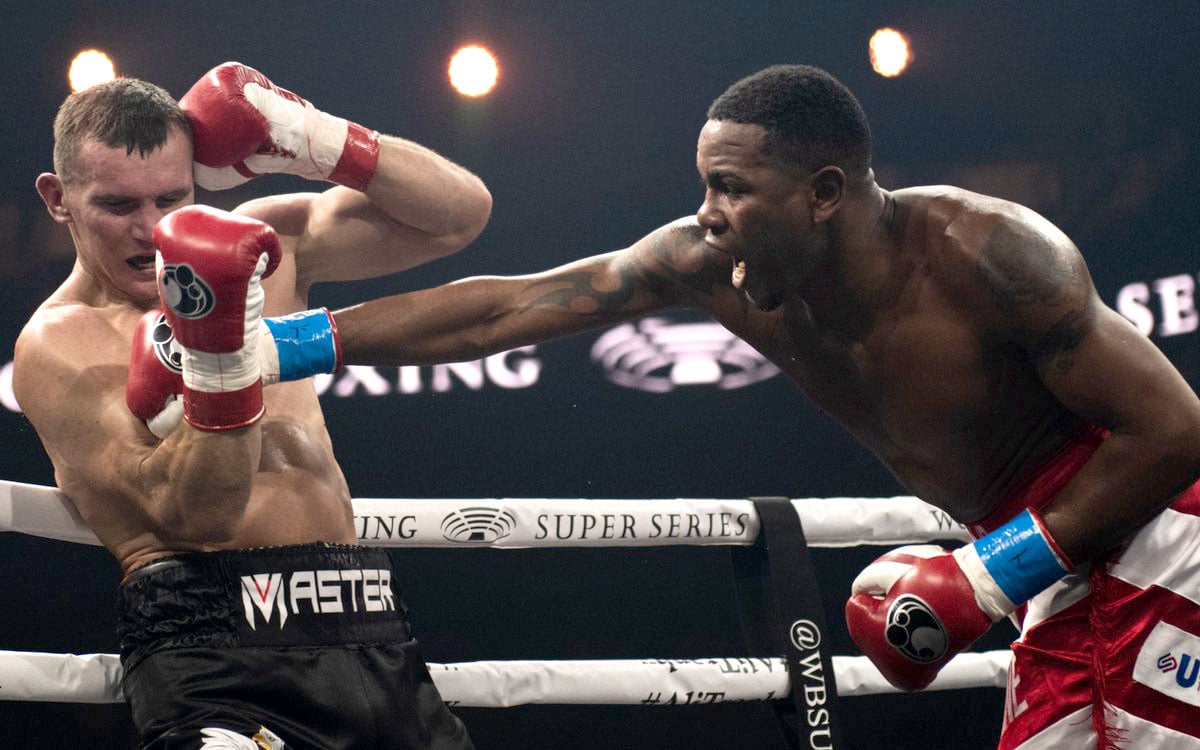 After a feeling-out first round, Dorticos turned up the pressure in the second and began punches holes in Masternak’s peekaboo defense with right hands between and around the gloves, and down to the body as well. Round 3 was even more disheartening as Masternak was rocked by a left hook-right hand combo and sustained two cuts, one on the corner of his left eye and another under his right eye.

Masternak – who told a story in the pre-fight vignette of adjusting his fighting style due to double vision following his 2015 fight against Tony Bellew – was resilient and landed some effective right hands in the fourth round to earn some respect from his opponent. While outgunned in the power department, Masternak showed he was as resilient and durable as anyone in the tournament, walking forward and coming back each time Dorticos let his hands go. By the eighth round, it was Dorticos who was initiating clinches to slow Masternak’s advances.

The final four rounds were give and take, but it was Dorticos who landed the stiffer shots in the judges’ estimation.

Dorticos offered a warning to Tabiti afterward: “Be ready; the KO Doctor is back and it ain’t gonna be easy.”

Mike Perez, a contestant in season one of the cruiserweight tournament, registered his second straight win with a 10-round unanimous decision over Keith Tapia by the scores of 96-93 on two cards and 97-92 on the third. Tapia (18-2, 11 KOs) came to the ring jumping and dancing, and got out of the gate fast, but was slowly chopped down by the Ireland-based Cuban Perez (24-3-1, 15 KOs).

Perez, who lost a point in Round 1 for rabbit-punching, was defeated by Mairis Briedis in the opening round match of the first season.

Opening up the DAZN broadcast, Stephon Young (18-1-3, 7 KOs) of St. Louis bounced back from his first career defeat, outpointing Colombia’s Wilner Soto (21-5, 12 KOs) in a 10-round bantamweight fight. The scores were 99-90 on two cards and 97-92 on the third. In Young’s previous fight, he was dropped in Round 3 by Reymart Gaballo before losing on the scorecards.