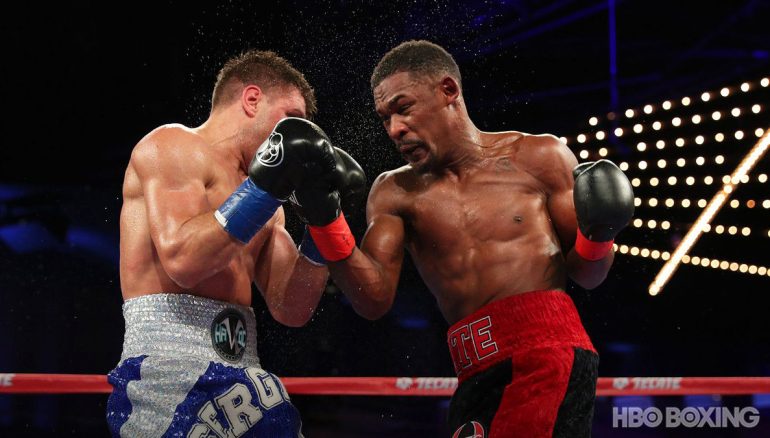 They predicted a war of attrition, a back-and-forth rumble in the main event at the Hulu Theater at Madison Square Garden on Saturday night. Daniel Jacobs wasn’t about to get lured into that. He was on message defensively, and his mobility edge and ring generalship carried the night, and brought him to a split decision. The scores were 114-113 for Sergiy Derevyanchenko on the Julie Lederman card, but her score was overridden by Tom Schreck and Steve Weisfeld, 115-112.

A crowd of 4,691 thoroughly enjoyed the high-stakes chess match.

On my unofficial card, I thought 8-4 Jacobs, with a extra point for the knockdown, would have been fitting.

Andre Rozier, Jacobs’ trainer, said his kid — his “son,” as he called him — fought well. Next time, he’d like him to work up the middle a bit more. And who should be next for Danny? “Canelo,” he answered.

“It was a very close fight. I knew that the knockdown could come back to bite me,” Derevyanchenko said after the bout.  “But I felt like I was hurting him every round, controlling action. Maybe I could have jabbed my way in a little bit more and gone to the body a little more. It was a great fight. He’s a tremendous competitor and I’d like to fight him again soon.”

The vacant IBF middleweight title will now go around the waist of Jacobs. He said “Let’s make the fight happen” when asked about a fight with Canelo, who now fights on the DAZN streaming service. Jacobs is aligned with Eddie Hearn, who is the DAZN’s main content provider, so one would think this is a very makeable fight for the spring or so.

Jacobs told Max Kellerman afterward he thought Sergey was gassing midway through, and he thought he was pulling away down the stretch. “This is as tough as it gets,” he said, giving Derevyanchenko full-on props. He said he feels like he’s in his prime, but Sergey’s body work did affect him.

The 31-year-old Jacobs came in the more known hitter, with a 34-2 (29 KOs) record, while Derevyanchenko entered with a rep as a “high risk, low reward” sort of foe. The 32-year-old Ukraine-born Brooklyn resident came to the main borough with a 12-0 (10 KOs) record, though he’d amassed another 20-plus fights in the semi-pro World Series of Boxing.

Some of the narrative strands as we entered this contest had to do with the fact that this was an on-paper 50-50 fight; with the boxing landscape looking re-jiggered, many fight fans are wondering if they will be seeing pairings such as this as frequently moving forward.

Also, this battle topped the third-to-last HBO live boxing event, and the first since Team HBO announced they’d be hanging up the gloves. An extra measure of nostalgia-izing was offered.

Nothing resembling bad blood or over-the-top hype attended the buildup. We learned that Jacobs and Derevyanchenko had sparred over 300 rounds together, but not who’d enjoyed the upper hand. No, both made clear, they were not friends, so no need to work that angle, we wordsmiths were alerted.

One slightly novel element had to do with the fact that Andre Rozier and Gary Stark Sr. worked the corners of both men. On this night, Rozier stayed with Jacobs and Stark gave his counsel to the Ukrainian.

In the first, Jacobs was looking to move and assess, be sparse with the output as he got the lay of the land and his feet underneath him. A right hand, a clubber, got Danny a knockdown. Sergey was backed to the ropes, he shoved Sergey back, took a half step back and landed a quick looper right.

In the second, Danny seemed like maybe he’d be imposing himself on Sergey … who then fired with a sharp counter and pushed Danny back. Jacobs switched to lefty to give him a different look and went back to a more cautious mode.

In the third, Danny’s mobility helped him early in the round. Then Sergey landed a three-punch combo and Danny went lefty again. He looked to get an angle on Sergey after sliding, seeking to land with something unseen. 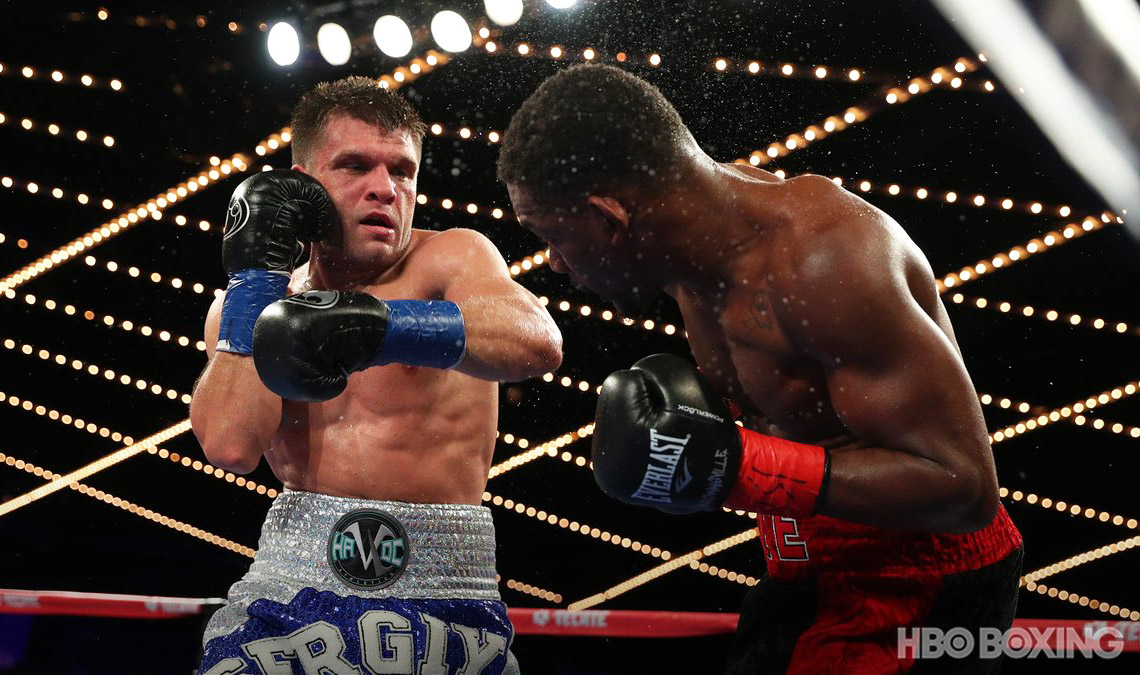 In Round 4, Sergey stalked and Danny moved. Jacobs kept his back off the ropes, slid, left then right, and used deft foot movement to keep the Ukrainian a step behind. Jacobs smartly slipped and then ripped, avoided contact and then caused it. Danny landed two hard shots and then Sergey answered and Jacobs gave him a “c’mon, man” look. They traded to end the round. This was heating up.

In the fifth, Danny kept sliding, using his feet to get him the distance he wanted. Sergey didn’t cut off the ring as well as it could be done; he was a bit slow as he chased. Danny’s sharp right slammed home, but Sergey’s defense was pretty on point. He was dipping his head and torso adroitly, but well enough to get the 10-9 from the judges? Jacobs more often set the pace and tone of the round.

In the sixth, Danny thought he had Sergey buzzed and threw a three-piece at him. One landed hard, but Sergey shrugged it off. Danny was sitting down and working off trades more, slipping and then trying to counter. A slick left-hook counter caught Sergey coming in and Danny again snagged the round with better ring generalship.

In Round 7, Danny was comfy being in tight with Sergey after moving more to start the round. He was seeing punches well and therefore happy to be in tight, working.

In Round 8, Danny again switched it up; he started moving, his back grazing the ropes. Then he stood his ground, hung tight a bit, used his reflexes and explosivity to good effect.

In the ninth, Sergey would edge his way in, try to get a bead on Danny, and get countered with a sharp one. High then low, Danny strafed him in center ring, midway through. Jacobs had confidence on his side; he knew he was master of that ring domain.

In Round 10, same as before. Danny slid, blocked some shots, edged away from some, slipped others. Then a left hook wasn’t slipped … and a right hand also landed on Danny. He slipped back into smart gear, though, and took the remainder of the round.

In the 11th, Sergey knew he needed to push harder, because he was likely not up on the cards. But Danny was engaging in slick pugilism, not even fighting, and he wasn’t going to get into a rumble. A clubbing left from Danny and a vicious right to the body and one later to the head gave the crowd a jolt. Lead left hooks from southpaw stance, two of them, landed flush.

In the 12th, Sergey pushed extra hard, but he wasn’t rushing in foolishly; he knew Danny could snipe. Sergey pushed the pace to a different zone and made Danny happy he did those extra sprints.