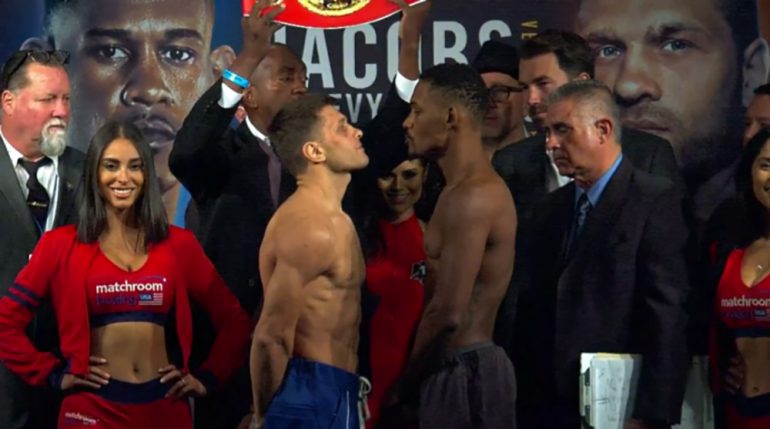 Only three fight cards remain on the HBO slate as the network prepares to exit boxing after 45 years, and Saturday’s is the final one befitting its illustrious legacy.

Daniel Jacobs and Sergiy Derevyanchenko will battle it out for a vacant middleweight title Saturday in New York, and as much as this is about nostalgia for longtime fans who grew up watching boxing on HBO, the fight carries high-stakes implications for three other networks that have filled the vacuum created by HBO’s lackluster programming.

Both 160-pounders are advised by PBC brainchild Al Haymon and managed by Keith Connolly (an increasingly influential figure in boxing). They even shared the same trainer — Andre Rozier — before the IBF ordered this clash to fill the vacancy created after Gennady Golovkin was stripped (Derevyanchenko is now being coached by Gary Stark Sr.)

Despite their shared connections, Jacobs and Derevyanchenko appear headed for different networks in a sport that grows more fractured with each passing moment.

England’s Eddie Hearn promotes Jacobs, whose three-fight contract with HBO expires after Saturday. It’s widely expected the Brooklynite will sign an exclusive deal with DAZN. Hearn, after all, is armed with millions of dollars and a bundle of dates from the streaming platform for his stable of fighters over the next two years.

If Jacobs (34-2, 29 knockouts) triumphs over his longtime sparring partner, talks will immediately begin in earnest toward a May 4 showdown with The Ring middleweight champion Canelo Alvarez, sources told The Ring. Alvarez is the biggest attraction in the sport, and now that he’s fighting exclusively on DAZN, it’s a natural matchup.

A Jacobs victory isn’t just important for the fighter himself; it’s key for DAZN. There’s only so many viable challengers to pair Canelo with now that he’s linked up with the streaming service for 10 fights and $350 million. Jacobs is a name that resonates with the American boxing public.

The 31-year-old raised his profile to such heights last year in a dramatic defeat to Gennady Golovkin, a decision many media members believed could have easily been tilted in the challenger’s favor. Now he needs to turn back Derevyanchenko to score such an opportunity; a second crack under the brightest of lights.

“Not only is it going to be a good fight but there’s so much at stake for a championship and then for the near future,” Jacobs said. “So, for all of this in the back of my mind, it’s truly allowed me to push myself in training camp, allowed me to get into a mental place where I’m going to be ready for any and everything.”

He’ll need to be at his sharpest considering the opponent standing across from him when the bell rings. Derevyanchenko is an accomplished amateur from Eastern Europe who, like GGG six years ago, simply has been refused a chance to display his abilities on the top level.

The pressure fighter bided his time patiently, and finally, his moment is here. A win in his first bout against top competition, and he’s not only a titleholder, but in prime position for a host of marquee matchups.

Haymon would appreciate Derevyanchenko bringing a title over for his fighters to vie for on Showtime and, beginning in December, Fox. Jermall Charlo is PBC’s only notable 160-pounder, and for some time, there’s been no notable dance partner for the budding star. A title clash with Derevyanchenko would solve that issue.

There’s also a slew of top-flight 154-pounders on the PBC side of the aisle who are primed to climb to middleweight in the near future (Jarrett Hurd chief among them). Of course, promoter Lou DiBella could have a different vision for Derevyanchenko, should he win, and attempt to steer him toward a different network.

Even in the four-belt era, titles remain valuable commodities in this splintered sport, and so much hinges on who emerges Saturday with the gold.

“This is a huge fight for both guys,” Connolly told The Ring. “The likelihood is that the winner could fight Canelo or GGG in 2019. Sergey is fighting to establish himself to the world and Danny is fighting to enhance his legacy and to possibly set up a mega fight with Canelo in May.

“Both guys are great fighters but more importantly great ambassadors for the sport. My relationship with Danny is well -documented; we’ve been together for 15 years and we’re like family so I am looking forward to this big night.”