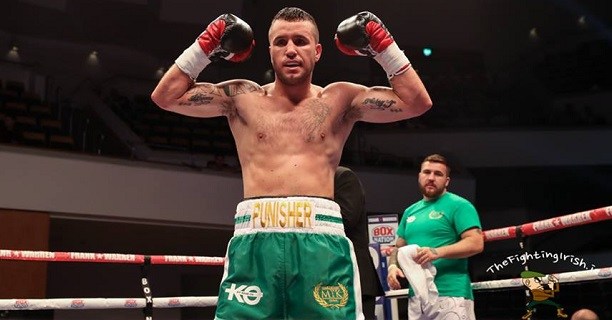 In what amount to nothing short of a slugfest, David Oliver Joyce (9-0, 7 KOs defeated Jorge Rojas Zacazontetl (4-5-1, 2 KOs) by unanimous decision on the undercard of the Daniel Jacobs-Sergiy Derevyanchenko world championship bout. The official scores at ringside were 58-53, 58-53 and 58-54, all for the 2016 Irish Olympian.

Both fighters tasted the canvas in the early rounds with Joyce sending Zacazontetl down in the first with a massive left hook. Zacazontetl came back and dropped Joyce in the second round when the Mexican landed a sneaky, quick counterpunch. Joyce was rattled several times but managed to land the harder punches over Zacazontetl, who lost three consecutive bouts coming into this fight.

Fighting for the first time in the United States, Joyce his defense behind and traded with Zacazontetl in the third round, hurting the Mexican fighter several times. Zacazontetl refused to move his head, and instead elected to eat three punches from Joyce to land one of his own. By the fourth round, Joyce was able to time the battle-tested Zacazontetl and hurt him upstairs with a dazing left hook. Joyce was able to cruise in the fifth round and work behind his jab and allowed Zacazontetl to get off some punches in a vicious exchange in the sixth round.

Heavyweight Prospect and 2016 Olympian Bakhodir Jalolov (3-0, 3 KOs) scored a TKO victory over Tyrell Wright (9-3-2, 2KOs). The bout ended when Wright’s corner signaled to referee Harvey dock to stop the contest at end of round 4.

The 24-years-old Jalolov, who fills out a massive 6-foot-6 frame, walked down Wright hard left hooks to the body and straight left hands up top that moved Wright halfway across the ring. In the fourth round, Jalolov unloaded a perfectly placed left hand that dropped Wright and opened a cut above his right eye.

Having represented his native Uzbekistan, Jalolov won the first round of the 2016 Olympic games in Rio before dropping the second bout to eventual Silver medal winner Joe Joyce.

The 24-yer-old Butaev unleashed a furious four-punch combination toward the end the third round, sending Cosio down. The referee ruled it a slip despite Cosio making very little attempt to get back up. After being examined by a ringside physician, referee Eddie Claudio was instructed to call the end to the bout. Butaev also wobbled Cosio in the second round, almost dropping the Panama fighter with a left hook. Cosio started moving his head and managed to escape the round without receiving further damage.

Although Butaev did not participate in the Olympics, he sported a 392-8 amateur record, including six bouts in the World Series of Boxing. Butaev is coming off a big third-round knockout over Ramses Agaton last July in California.

Crowd favorite Reshat Mati improved to 2-0 (1 KO) with a four-round unanimous decision victory over Juan Carlos Sepulveda (0-1-1). The official scores at Ringside were 40-35 across the board.

The 19-year-old Albanian fighting out of Brooklyn made his professional debut earlier this month on the DAZN show in Chicago. Mati drilled Sepulveda with a perfectly-timed uppercut in the second round scoring the only knockdown of the bout. With the majority of the hometown crowd behind him, Mati went uppercut-happy and outworked Sepulveda to win handily.

The 26-year-old Day dominated Ayala by working behind the jab and going to the body to limit Ayala’s ability to land anything of meaning. Day had a massive fifth round hurting Ayala with a laser-quick left hook upstairs followed by a hard left to the body. Day continued the assault until the eighth round when he seemed to punch himself out and Ayala landed a right hand stunning Day and causing him to retreat the rest of the round.

Day settled back in in the ninth round and used his jab to re-establish control and land multiple combinations forcing the 37-year-old Ayala to fight off the ropes. Day now runs his winning streak to five straight and is coming off a unanimous decision victory over Kyrone Davis last March at Brooklyn’s Barclays Center.

In the opening bout of the evening 2016 Irish Olympian Steven Donnelly (3-0) defeated Ray Servera (0-3) by unanimous decision. The official scores at ringside were 40-33 x 3.

Donnelly dropped Servera three times during the bout including once in the opening round and twice more in second round. Servera had no answer Donnelly’s straight right hand which he landed at will, especially off a three-punch combination.