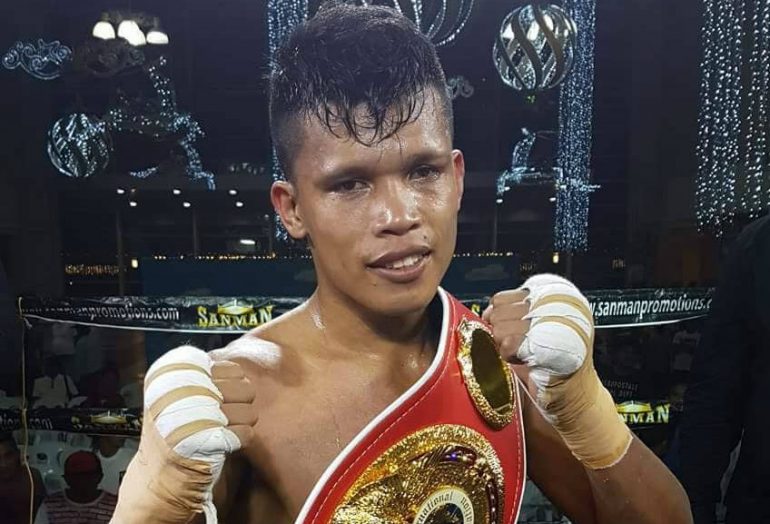 In years past, it wasn’t uncommon to wait around the gym for Randy Petalcorin, only for him to not show up. He’d say he wasn’t feeling well, and he’d skip out on his training a few days a week. More likely, he’d be sitting at his house in General Santos City in front of his big screen TV playing video games.

Natural ability had been enough to come out on top in the past. Usually.

This training camp is different, because the threat he faces is different. His next opponent, Felix Alvarado of Nicaragua, is not Jade Yagahon or Oscar Raknafa or one of the other soft retreads Petalcorin has demolished in recent fights. Alvarado has finished off his last nine opponents, using a swarming, non-stop attack coupled with lights-out power. Among his victims was Fahlan Sakkreerin Jr., whom he dropped for the count in round three to become the number one contender for the vacant IBF junior flyweight belt he’ll fight Petalcorin for on Monday, October 29 at Midas Hotel in Pasay City, Philippines.

Sakkreerin was on the canvas for several minutes afterwards. Message sent.

“Felix Alvarado for me is the best non-champion at 108 pounds. He can beat all those 108-pound champions as well,” said Jim Claude Manangquil, the Sanman Promotions figurehead who co-promotes Petalcorin alongside Peter Maniatis and MP Promotions.

To get into the necessary mindset, Petalcorin is literally living in the gym. He has left behind his family 30 minutes away to share a room with stablemates Reymart Gaballo, Romero Duno and trainer Fernando Lumacad in the Sanman Gym in General Santos City. The two-bedroom home, which he paid for with the purse from his 2015 first round knockout win in China over Yiming Ma, is made of concrete, a building material mostly featured in middle class homes in the provincial city. Now he’s living like he was before he achieved any semblance of success, on a complex with 20 other boxers.

“It’s the mindset. Being there with the fighters, all you think is training,” said Petalcorin (29-2-1, 22 knockouts).

His one luxury during this camp are visits every other day from his one-year-old son Blake, who is named after NBA player Blake Griffin. It’s a reminder of what he’s fighting for.

“It’s different when you have a complete family with a wife and son. I want to give him the good life that I didn’t have,” said Petalcorin.

Petalcorin is hoping to provide a more prosperous life for his son than he himself had growing up in Davao del Sur. One of six children, the family lived in the crossfire between New People’s Army and the Philippine military. He says the family once hid in a bathroom as armed rebels ransacked their home for food and valuables.

Other than an early stoppage loss to future champ Marlon Tapales, Petalcorin has been successful. His biggest setback otherwise was a dubious split decision loss to Omari Kimweri in Australia in 2016, which was marred by numerous officiating errors which were even acknowledged by the WBC.

Despite being an exciting southpaw puncher, his fights have rarely been featured on television in the Philippines. That has changed thanks to ESPN 5, which has incorporated boxing into their domestic sports programming and made it possible for some notable Filipinos to compete at home.

The fight will be shown in the Philippines on ESPN 5, and live in the United States on ESPN+. Attendance to the fight is free.

Alvarado (33-2, 29 KOs) is three years older than Petalcorin at 29 and has won 15 straight since suffering back-to-back losses in world title fights against Kazuto Ioka and Juan Carlos Reveco.

“I know it is a hard fight but I like our chances,” said Manangquil. “I know everybody always says they are in the best shape of their life, but I guarantee you now this is the best that Randy has looked in the nine years we’ve worked together.”

“I know that Alvarado is a strong fighter,” said Petalcorin. “I trained hard because I want to be perfect and not have mistakes in the fight.”

The first four undercard fights featuring Presco Carcosia, Jerven Mama, Ronnie Baldonado and Jade Bornea will be shown in the Philippines on Aksyon beginning at 4 PM, with the main card starting at 7 PM on ESPN 5.