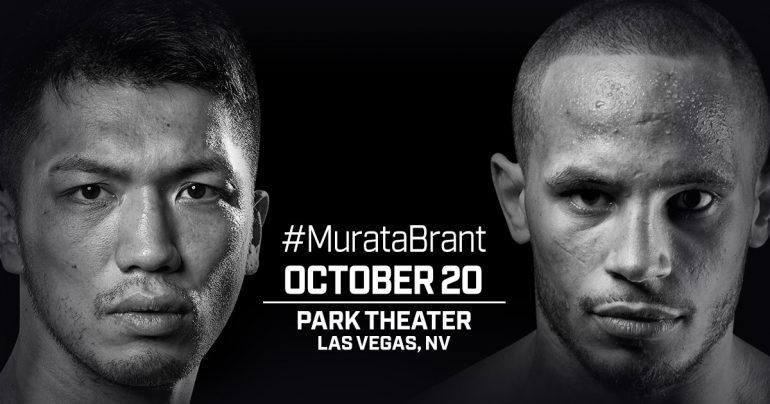 Ryota Murata is returning to the States, and this time, he’s atop the bill.

The Japanese star, who claimed gold at the 2012 Olympic Games, will defend his secondary middleweight title against Rob Brant on October 20 at MGM Resorts’ Park Theater in Las Vegas, Murata’s promoter, Top Rank, announced Thursday. The 160-pound bout will be streamed on ESPN+.

“It is the dream of all boxers to headline in Las Vegas, and for me, this is certainly a dream come true,” said Murata (14-1, 11 knockouts). “Rob Brant is an excellent opponent, and I will prepare my best to put on a great performance for all of the fans in Las Vegas and watching on ESPN+. I am only getting started as a world champion.”

The 32-year-old’s title reign might be short, but his following in Japan is already massive. The Tokyo-based boxer routinely fights before sold-out crowds in his homeland, and he draws massive ratings on local TV. It’s not just popularity he seeks; Murata wants to test himself against the best middleweights in the world, all of whom ply their trade on American soil.

Murata is rated No. 6 by The Ring at 160 pounds, and with a win over Brant, he’ll be well-positioned for a fight with the likes of Canelo Alvarez, Gennady Golovkin, Daniel Jacobs and a host of other top operators.

Brant (23-1, 16 KOs) was a top middleweight prospect before he elected to move up one weight class to compete in the World Boxing Super Series. He was surprisingly dominated by Juergen Braehmer in a first-round matchup in October; the 27-year-old swiftly returned to his natural weight class afterard. He scored a first-round KO of journeyman Colby Courter in March.

“I am very excited about my upcoming bout with Ryota Murata. This fight has been on my mind since before he fought Hassan N’Dam,” said Brant, a native of Saint Paul, Minnesota, who made his name on ShoBox. “Though I respect all of his accomplishments, I have always felt as though I have all of the tools to clearly defeat him.

“Not only has it been a life goal of mine to be a world champion, but also to headline a card in Las Vegas at a major venue. I take none of this lightly. This means the world to me, and that will reflect on October 20.”

Murata has fought in Vegas twice before in minor fights before he went on to twice compete against Hassan N’Dam, a former titleholder currently rated No. 9 by The Ring. The Frenchman won a highly controversial bout with Murata in May 2017; there was no doubt in the rematch. Murata scored a seventh-round stoppage and proved he wasn’t just an attraction in Japan, but a guy who can fight on the world-class level.

Now, he’s back in Las Vegas on the doorstep of a major fight next year.