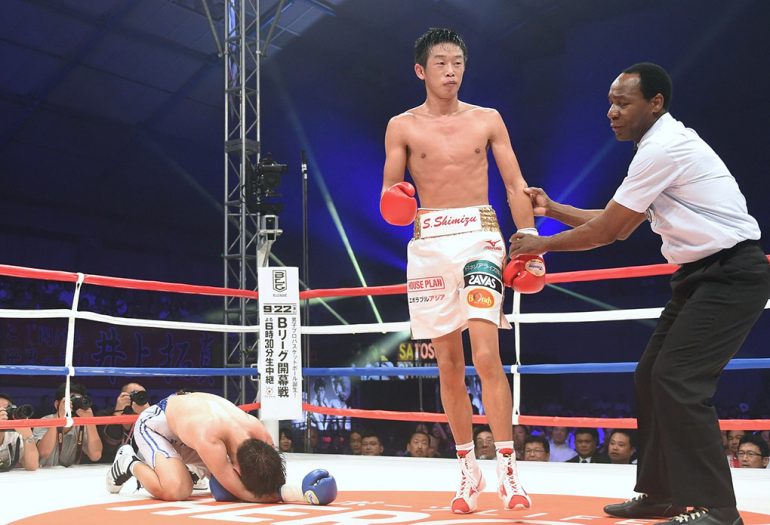 Japanese featherweight Satoshi Shimizu takes on Shingo Kawamura over 12 rounds at the Korakuen Hall in Tokyo on Friday.

Shimizu (6-0, 6 knockouts) won a regional title in just his fourth outing and is confident of retaining it once again before possibly mixing the world champions at 126 pounds.

“(Kawamura) is a southpaw boxer and very aggressive,” Shimizu told The Ring when asked what his opponent brings to the fight. “I don’t think he has much experience, but he will attack without fear.”

The Yokohama resident was a decorated amateur with over 160 contests. His career in the unpaid ranks culminated in a historical bronze medal at the London 2012 Olympics, making him the first Japanese national ever to medal at the games. Middleweight contender Ryota Murata also won gold that same year.

This experience obviously helped prepare Shimizu for the fast-track strategy as a professional and, at 32 years old, he and his team are confident that they’re moving at the correct pace.

“I have trained very well through camps and sparring and therefore I do not feel rushed or pressed regardless of my age and number of fights as a pro.” Shimizu explained.

Shimizu has prepared in Osaka with team mate Akira Yaegashi, who will face Hirofumi Mukai on the same card, and sparred with seasoned pro Reiya Abe as well as two amateur champions.

The 5-foot-10 southpaw holds height and reach advantages over nearly every 126-pound fighter and with the requisite experience figures to be a tough out for any opponent. He is currently ranked No. 6 by both the IBF and WBC.

“If he wins the next bout with Kawamura, I will look for him to challenge for a world title immediately, if he has a good chance,” Ohashi said.