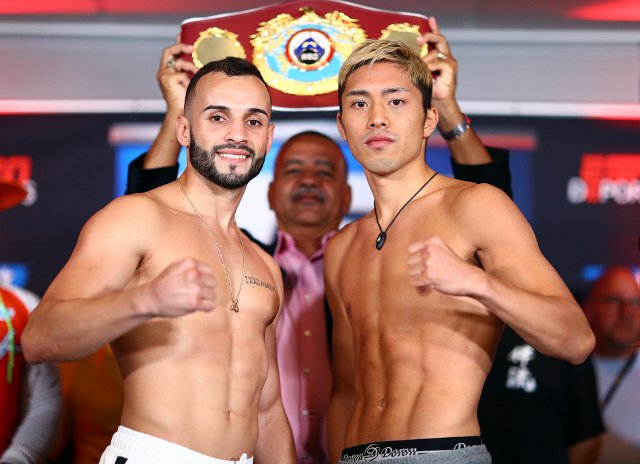 Christopher Diaz and Masayuki Ito both made weight for their vacant WBO junior lightweight bout tonight at the Civic Center in Kissimmee, Florida.

The title at stake was vacated by Vasiliy Lomachenko, who moved up to lightweight earlier this year. Diaz is the mandatory challenger at 130 pounds and Ito is ranked No. 2 by the WBO.

The 23-year-old Diaz (23-0, 15 knockouts) has demonstrated more aggression and punching power in recent fights. In his last bout, on Mar. 17, he stopped Braulio Rodriguez in four at the Theatre at Madison Square Garden.

Diaz, who has stopped his last four opponents, will have a partisan crowd on his side. Kissimmee is a suburb of Orlando, where a large Puerto Rican population resides.

“I never expected to be at this point in my career,” said Diaz, who lives in Barranquitas. “I had my pro debut in 2013 and I didn’t even know that I was going to get to 10-0, 20-0. I never expected to be fighting for a world title, but my hard work every day, my anger, my passion for this sport (brought me) this opportunity.”

“I know Masayuki Ito is a great fighter. I’ve been working for 15 years to now for this opportunity. I know Ito is going to come to give me a war. That’s the kind of fight that I want for the fans.”

Ito (23-1-1, 12 KOs), who hails from Tokyo, Japan, has won his last seven bouts since suffering a majority decision loss to Rikki Naito in February 2015. He is promoted by Teiken Promotions.

Vladimir Nikitin, who scored the controversial victory over Michael Conlan in the 2016 Olympic Games in Rio de Janeiro, will make his pro debut Edward Kakembo (10-4, 3 KOs) in a six-round featherweight bout.