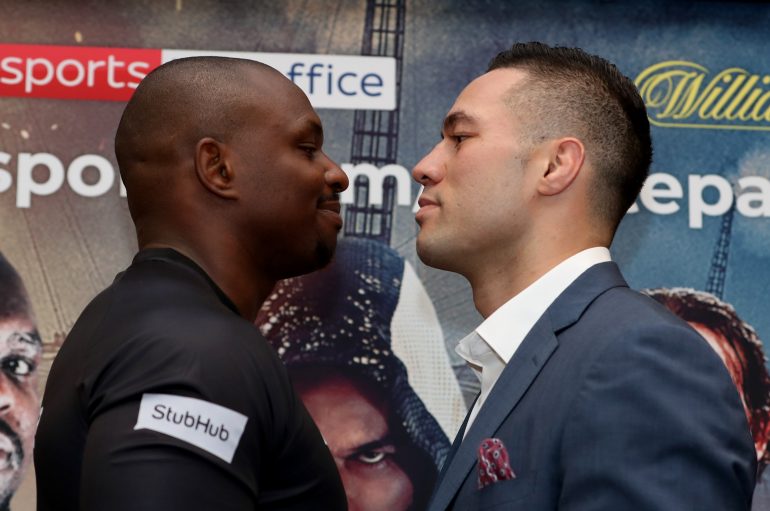 Two world-class heavyweights will throw down in a crossroads fight this weekend at the O2 Arena in London.

The home fighter, Dillian Whyte, requires a victory over New Zealand’s Joseph Parker to keep his hopes of a world title fight alive. Parker, the former WBO titleholder, is looking to rebound from a one-sided decision defeat to Anthony Joshua in March.

Whyte, who is rated No. 6 by THE RING at heavyweight, is coming off a brutal sixth-round knockout of Australia’s Lucas Browne. Afterwards, the colossal Londoner called out WBC titleholder Deontay Wilder but negotiations failed to get off the ground. The Parker fight is a worthy replacement.

“Joseph is a fighting man, that’s his heritage, but he’s short of options,” said Whyte (23-1, 17 knockouts). “He could have gone to the U.S.A to fight Bryant Jennings for a small purse and no attention or come to the U.K. in front of a sell-out crowd and get better pay and a more prestigious fight.

“He’s motivated – he knows beating me gets him close to another shot at AJ, so that’s what makes him dangerous: ‘If I do Dillian, I’m back in the big time again.’ – but he’s got to get past me first.

“For me, it’s progressing my career. You have to have consistency and be active, keep fighting, go through training camps. It doesn’t matter how small the progress is, as long as you keep progressing, then you will improve and grow. I’m getting better, stronger, smarter.”

Parker, who is rated No. 4 by THE RING, has not shown his best form of late. He was below par against late-replacement Razvan Cojanu last May, and Britain’s Hughie Fury outboxed him for large portions of their contest in September. He didn’t come close against Joshua in their unification fight, however, Parker insists that Whyte is made to order.

“Dillian is on the cusp of fighting for a world title and beating him would put me right back at that top table,” said Parker (24-1, 18 KOs). “(You) haven’t seen the best of me yet, there’s a lot more to come. It’s a case of getting more experience, learning in the gym and working on my craft, making improvements gradually.