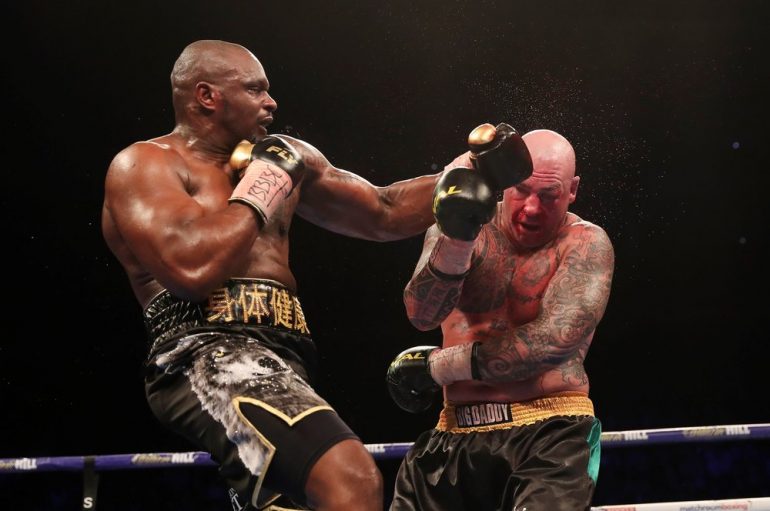 Call it no contest.

In a battle of colossal heavyweights, Dillian Whyte scored a sixth-round knockout over a lethargic and frankly hopeless Lucas Browne at the O2 Arena in London. The official time was 0:37 and the bout was scheduled for 12.

After having everything his own way, Whyte, who is rated No. 7 by THE RING at heavyweight, came out to end matters in the sixth. It was a smart choice because a massive left hook landed flush on the chin and Browne was out before he hit the canvas.

There were anxious moments after the bout was stopped but, thankfully, the affable Australian recovered after oxygen was administered. Despite being conscious, Browne was taken from the ring on a stretcher.

“Hopefully Lucas Browne is okay,” said Whyte in an interview with Sky Sports before going into call-out overdrive. “Deontay Wilder, where you at? June! Let’s go! I’m ready. I’m No. 1 (mandatory challenger with the WBC). June 11 at the O2. I’m No. 1 baby, let’s go.

“I proved to everyone that I’m world class. A lot of people were writing me off, giving Lucas Browne the edge. We kept quiet and worked hard. I’m a good fighter, but nobody has really seen it yet. When I’m challenged, I’ll rise to the challenge.”

Whyte (23-1, 16 knockouts) opened a serious laceration over Browne’s left eye in Round 1 and battered the target for fun in every session. The visitor was too slow to lead or counter and he absorbed a horrible amount of punishment for the duration of the contest.

It was a strong performance from Whyte and the finish was world class. However, the 38-year-old Browne (25-1, 22 KOs) was completely out of his depth.

It only lasted a few minutes but the British lightweight title fight between champion Lewis Ritson and challenger Scott Cardle was highly entertaining.

Cardle, a former British champion, came out blazing in Round 1, tagging Ritson with an array of power shots which had an immediate effect on the pre-fight favorite. Slowly, however, the attack subsided and Ritson found his rhythm. In the second round, a heavy left hook was ruled a knockdown when Cardle was held up by the ring ropes. Ritson followed up with a series of heavy blows which forced the stoppage. The official time was 2:05.

The British and Commonwealth light heavyweight title fight was even shorter. Callum Johnson, who held the latter, added Frank Buglioni’s Lonsdale belt to his collection with a stunning first-round stoppage.

Both men began trading from the opening bell and Johnson repeatedly got the best of it. A brace of solid right hands robbed Buglioni of his equilibrium and then the left hook was doing damage. Sensing the moment, Johnson continued to let his hands go with abandon and Buglioni went down in a corner. The Londoner rose gamely, but he was badly hurt and ready to be taken. Johnson, who had been inactive for 18 months, put together a powerful barrage, punctuated by a huge right hook which forced referee Victor Loughlin to call a halt. The official time was 1:31.