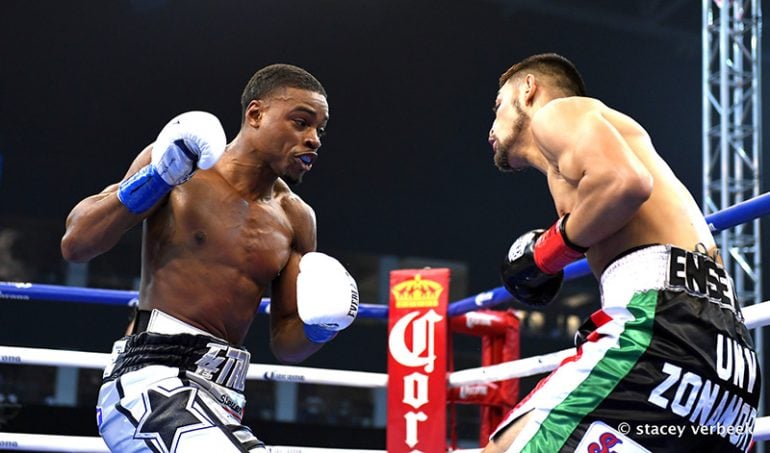 Errol Spence lived up to his nickname “The Truth” in blowing out Carlos Ocampo  on June 16 in his home region of Texas. The undefeated IBF welterweight titleholder, who entered the Showtime-televised bout as THE RING’s No. 2-rated 147 pounder and No. 7 in our pound-for-pound top 10, was so dominant that some members of the Ratings Panel suggested that he move to the top spot in the welterweight rankings (which is currently occupied by Keith Thurman) and advance in the mythical ratings.

Here’s the problem, he looked like a “world-beater” against a guy who wasn’t world class (and, no, we don’t give any credence to the ridiculous No. 3 rating the IBF gave the unheralded Mexican prospect).

So, Panelists that believe in the “eye test” are ready to crown Spence as the best 147 pounder on the planet and one of the elite boxers of the sport, and those that rate a fighter based on his resume suggest waiting until we see the southpaw boxer-puncher in against another live body (so far, the best names on the Texan’s resume are a damaged and possibly weight-drained Kell Brook and the battle-worn Lamont Peterson).

However, the year isn’t over. Thurman, who hasn’t fought since unifying belts against Danny Garcia last March, could be dropped for inactivity if he doesn’t go through with his scheduled August 4 return. And hopefully, Spence, who wants to fight again in 2018, gets another opportunity to further his claim of being the truth, this time against ranked welterweight.

POUND FOR POUND – Spence remains at No. 7.

“I feel bad for Srisaket Sor Rungvisai, who dropped a spot recently, but I’d have Spence at No. 4.”

Wainwright was overruled by other Panelists and members of the Editorial Board. 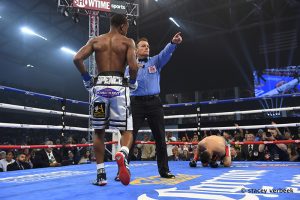 “Spence stays put,” said Associate Editor Tom Gray. “He looked dazzling but the opponent was a prospect. Ocampo didn’t have a snowball’s chance in hell.”

Added Martin Mulcahey: “Keep Errol Spence where he is. He is young and should move up on the back of a significant fight, in my opinion. Srisaket’s personal problems seem more of a threat than what Ocampo presented.”

Wainwright saw the wisdom in their caution.

“Spence passes the eye-test more than most but, yes, Ocampo wasn’t even rated at welterweight by us, so I can see it’s a leap to bump him up in the pound for pound,” he said.

Welterweight – Spence remains at No. 2.

“Errol Spence is a very, very bad boy,” he said. “Carlos Ocampo dared him to knock him out and he did just that in one round. Best welterweight in the world for my money. Spence to No. 1.”

Again, Gray pumped the breaks on the excitable “Dancin’ Anson.”

“THE fight is Crawford-Spence,” said Gray. “I’m a (Terence) Crawford man but ratings stay the same.”

Lightweight – Javier Fortuna, who moved to junior welterweight where he engaged in a four-round No Decision due to an accidental injury, drops out. Streaking British champ Lewis Ritson (16-0, 10 KOs) comes in at No. 10.

There was talk (mostly from Wainwright) of former 130-pound beltholder Jose Pedraza coming in at No. 10, but Ritson got a shining endorsement from Yours Truly. 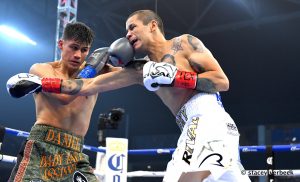 Junior featherweight – No. 5-rated Danny Roman continues his climb up the 122-pound rankings, switching places with No. 4-rated Jesse Magdaleno, after outpointing an overweight Moises Flores, who drops out of the top 10. English standout Gavin McDonnell (20-1-2, 5 KOs), who recently outpointed former bantamweight beltholder Stuart Hall to move to 4-0 since dropping a decision to WBC titleholder Rey Vargas last February, comes in at No. 10.

Yasuka Kuga, of Japan, and Ludumo Lamati, of South Africa, also received consideration for the No. 10 spot.

Flyweight – No. 1-rated Artem Dalakian retained his WBA title with an eighth-round stoppage of Sirichai Thaiyen.

Junior flyweight – No. 8-rated Angel Acosta moves up one spot after a 12th-round stoppage of Carlos Buitrago in defense of his WBO belt.