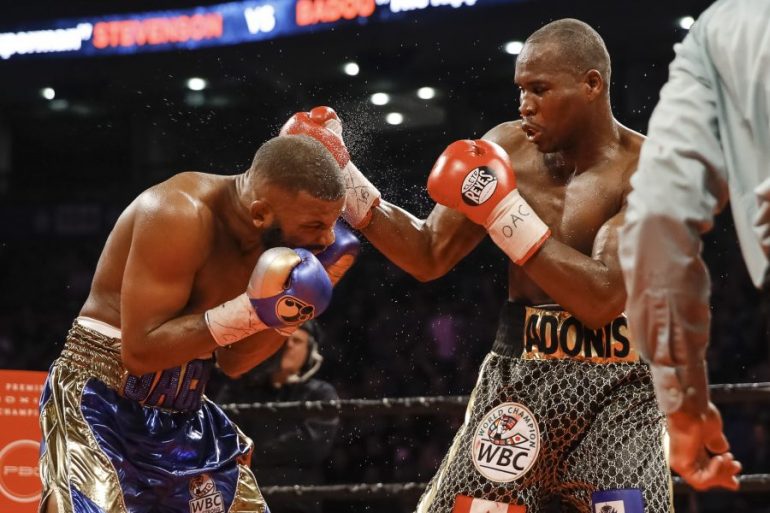 The Showtime network delivered three quality title bouts to a U.S. audience on May 19 – two in the featherweight division and one at light heavyweight – which caused a moderate reshuffling of THE RING’s rankings in those weight classes. 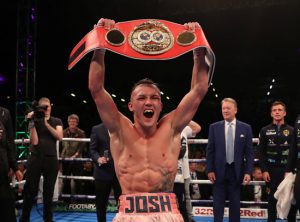 The action started with Josh Warrington’s gutsy split decision victory over IBF featherweight titleholder Lee Selby on his home turf of Leeds, England. Warrington (26-0, 7 knockouts), who entered the bout (which was streamed on Showtime’s Facebook page in the U.S.) as THE RING’s No. 9-rated 126 pounder and a decided underdog despite hometown advantage, lifted Selby’s IBF belt. Selby (26-2, 9 KOs), a respected Welsh boxer and THE RING’s No. 5-rated featherweight, lost for the first time since dropping a four-rounder in his fifth pro bout back in 2009.

The other 126-pound title bout featured THE RING’s No. 3-rated contender Gary Russell Jr. in the third defense of his WBC belt against mandatory challenger (and THE RING’s No. 7-rated featherweight) Joseph Diaz Jr. in his home region of Oxon Hill, Maryland. Russell (29-1, 17 KOs), whose only loss is a majority 2014 decision to Vasiliy Lomachenko, outworked, outboxed and outmaneuvered the game-but-still-a-bit-green Diaz (26-1, 14 KOs) to a unanimous decision in a bout that was competitive in the early rounds but controlled by the 29-year-old defending titleholder in the middle and late rounds. Diaz, a 25-year-old native of South El monte, California, showed promise by decisively winning Round 12.

THE RING Ratings Panel voted to move Russell up one spot in the rankings. Warrington advanced to No. 6. Selby drops to No. 7 and Diaz dips to No. 8. The new RING featherweight rankings is as follows:

In the most dramatic fight of the night, Adonis Stevenson, THE RING’s No. 2-rated light heavyweight, retained his WBC belt for the ninth time with a majority draw against Badou Jack, who was the magazine’s No. 8 contender going into the title bout held in Toronto, Canada.

Stevenson (29-1-1, 24 KOs), from Quebec by way of Haiti, kept the former 168-pound titleholder in check with his superior athleticism and formidable punching power over the uneventful first half of the bout. However, Jack (22-1-3, 13 KOs), a Las Vegas-based Swede who is part of the Mayweather Promotions stable, sensed the 40-year-old southpaw was beginning to tire after Round 6 and came on very strong over the second half of the bout. 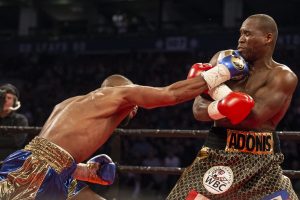 Jack takes it to Stevenson in the entertaining second half of their title bout. Photo by Esther Lin/Showtime

Jack bloodied Stevenson’s nose in Round 7 and had the power puncher hanging on for dear life in Rounds 8, 9 and 10. However, in the final 30 seconds of Round 10, Stevenson’s vaunted left hand and penchant for body punching bailed him out when he caught Jack with two body shots that visibly hurt the challenger. Stevenson dominated the first half of Round 11, Jack took over the second half, and then won Round 12 handily.

Some members of the Panel thought Jack proved that he was at least on par with Stevenson and deserved to be side-by-side with the long-reigning beltholder in the rankings, thus suggesting a jump all the way to No. 3. Others thought a No. 3 ranking was too high for Jack, who they thought gave the fight away by boxing too tentatively during the first six rounds of the bout.

“That fight was boring for six rounds before igniting,” said Martin Mulcahey. “Jack has no one to blame but himself for taking the first three rounds off. I think Badou would be too high at No. 3 given that he has yet to beat a top-five light heavyweight, so I would move him to No. 5 until he does.”

A member of the Editorial Board suggested dropping Stevenson in the rankings because he thought the 40 year old looked every bit of his age in gassing out as soon as Jack began to apply pressure. He also felt that Jack “beat the s__t” out Stevenson in the rounds that he won.

We ultimately decided to drop Stevenson to No. 3 and advance the hard-luck Jack to No. 4. The new 175-pound line up is as follows:

Bantamweight – No. 10-rated Jason Moloney (17-0, 14 KOs) moved up a spot to No. 9 after stopping Japanese veteran Kohei Kono after six rounds on Saturday in Australia. 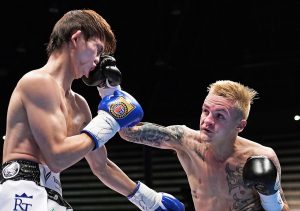 Budler (32-3, 10 KOs), a 30-year-old former 105-pound titleholder who was coming off a heart-breaking split-decision loss to then-IBF 108-pound beltholder Milan Melindo, advances to champion. Taguchi (27-3-2, 12 KOs), a 31-year-old Tokyo native who hadn’t lost since a 10-round decision to Naoya Inoue in 2013 and was coming off a WBA/IBF unification decision over Melindo, drops to the No. 1 spot.

“Big props to Hekkie Budler going on the road and edging Ryoichi Taguchi to become THE RING, WBA and IBF 108-pound champion,” said Anson Wainwright. “I spoke to him awhile back and his goal in boxing was to win THE RING title. I’m chuffed for him.”

We’re all “chuffed” for Hekkie, whatever that means (hopefully it isn’t something weird). 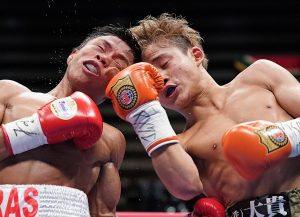 Strawweight – No. 3-rated Hiroto Kyoguchi (10-0, 7 KOs) keeps his rankings after getting up off the canvas to outpoint 19-year-old Filipino prospect Vince Paras (13-1, 11 KOs) and retain his IBF title by unanimous decision in the co-feature to Taguchi-Budler.