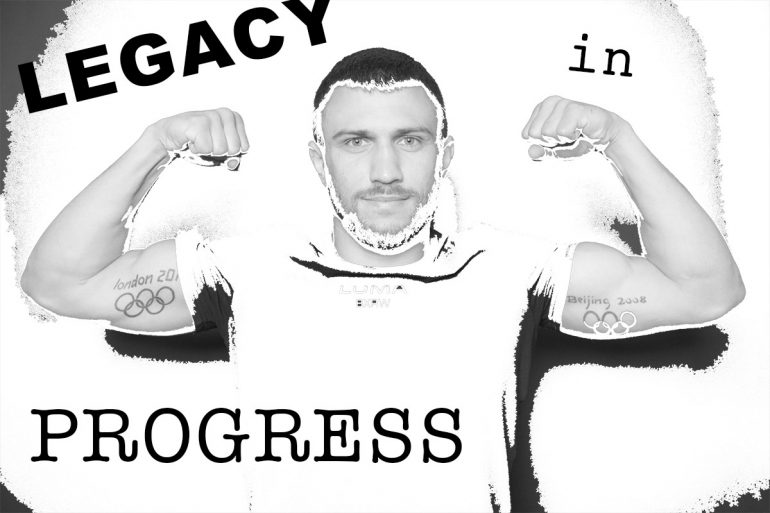 Note: This feature originally appeared in the June 2018 issue of THE RING Magazine

CALL HIM ‘FIGHTER OF THE YEAR’ OR ‘NO. 1 POUND-FOR-POUND’ IF YOU WANT (OR NOT), BUT VASILIY LOMACHENKO HAS HIS EYE ON A BIGGER PICTURE

Vasiliy Lomachenko’s  selection as the 2017 Fighter of the Year by THE RING and the Boxing Writers Association of America did not come without some criticism.

Lomachenko’s detractors claimed he did what he was supposed to do last year when he forced Jason Sosa, Miguel Marriaga and the respected but undersized Guillermo Rigondeaux to retire between rounds in defenses of his WBO 130-pound title. Some hardcore fans took to social media to loudly express their belief that Terence Crawford and Srisaket Sor Rungvisai were more deserving of the honor.

Never mind that some of the same fans (and media) who refuse to give Lomachenko credit for the Rigondeaux victory boldly predicted that the Cuban standout would give him fits when the two-time Olympic gold medalists matched skills at The Hulu Theater inside Madison Square Garden on December 9. The criticism doesn’t bother Lomachenko, whose mind is firmly focused on a much bigger prize than fighter-of-the-year awards. 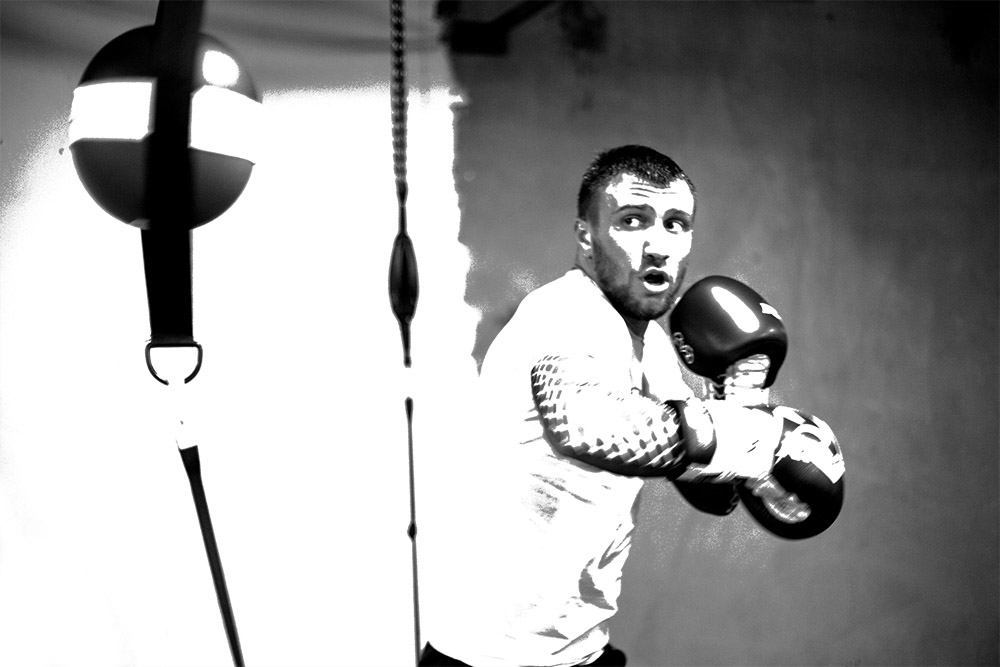 “I feel good about being named Fighter of the Year, but that wasn’t my goal. My goal is to make history in boxing,” Lomachenko told THE RING through interpreter Daniel Bagdasarov.

Lomachenko (10-1, 8 knockouts) will take another step in the direction of that goal when he challenges Jorge Linares for the RING and WBA lightweight titles on May 12 at Madison Square Garden. This time the wizardly southpaw will headline in the big room of the storied New York City arena, and nobody can accuse him of picking on a little guy.

Both Linares, who is promoted by Golden Boy Promotions in the U.S., and Lomachenko, who is guided by Top Rank, were in the hunt for a major fight. With lightweight standout Mikey Garcia currently toiling in the 140-pound division, it made sense for the lightweight champ and the No. 1 junior lightweight to hook up, but the business side of boxing threatened to block the dream matchup due to Linares’ ties to HBO and Top Rank’s exclusive deal with ESPN. However, the promoters – perhaps pushed by the desire of their stable standouts – worked out their differences and Linares-Lomachenko will be presented to the widest possible U.S. audience on ESPN. 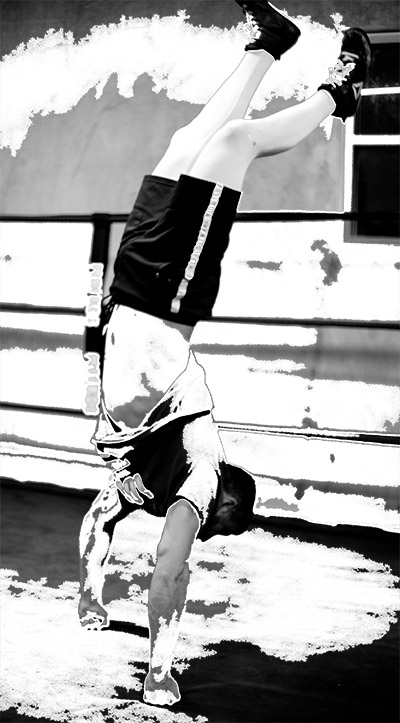 “It was a surprise when I was told that the fight was made,” Lomachenko admitted. “A lot of good fights don’t happen because of their ties to different networks … so I’m glad we were able to negotiate and talk it over for this fight to happen.”

Lomachenko was already a few weeks into his training camp when THE RING visited him at the Boxing Laboratory gym in Oxnard, California. On this day, March 26, he sparred eight 2-minute rounds with Michael Perez in a tiny 16-by-16-foot ring in an upstairs loft area of the factory-sized gym. It took seven rounds before Perez, a solid technician who fights at lightweight and junior welterweight, was able to land a clean punch to Lomachenko’s face.

“It’s a never-ending learning process being in the ring with this guy,” said Perez, who at that point had already shared two six-round sparring sessions with Lomachenko. “He shows you something different every time, every round. No matter which way he moves, or from what angle he throws, he’s always in position to hit you. But he’s never there to be hit.

“If it ain’t his feet, it’s his hands or his head, but something is always moving with him. I’ve sparred with a lot of champions, I’ve done many rounds with Mikey Garcia, but nobody compares to Lomachenko.”

Most of the boxing world agrees with Perez’s assessment. Even Lomachenko’s critics favor him to beat Linares (44-3, 27 KOs), an immensely skilled three-division beltholder from Venezuela who carries a 13-bout win streak into their May 12 showdown.

And despite Linares’ speed, greater size and extensive professional experience, Lomachenko does not appear to believe the worldly champion presents any special problem or challenge.

“Watching him fight, I’m not seeing anything I should worry about,” said Lomachenko, who ended his legendary amateur career with one of the best records in history, 396-1. “But I know he will try to show me something in the ring. For now, I just watch tape on him. I’m getting ready. I’m doing my homework. 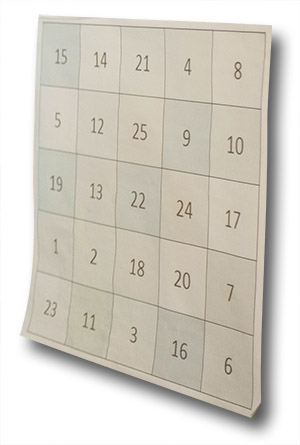 “I had a lot of amateur fights, lots of experience, and his style fits my background. I fought guys with his style before. Yes, he’s fast, he’s strong, he moves well – so we will see how I deal with that. I’m making my plan now on beating him. I’m not saying I’m going to break him down or knock him out, but I’m going to be ready for him and I’m going to put on a show.”

If his sparring tactics on March 26 were indicative of his May 12 game plan, he will indeed put on a show and he probably does intend to break Linares down.

Lomachenko was the aggressor during the 16 minutes of work, but it was his unique brand of pressure. He was in Perez’s face for the duration of the first round but barely threw a punch – only fast counter jabs. The 30-year-old master boxer introduced hard lefts to the body in Round 2, darting in and out of range with a dancer’s balance and quick jab, straight left, jab combinations that forced Perez to the ropes.

Between rounds, Lomachenko paced around his corner as his coach and father, Anatoly, appeared to give him very direct instructions. He must have been asked to feint more, because he mixed those taunting head movements in with more speed and aggression in Rounds 3 and 4. Perez flashed a good jab and was able to land it to Lomachenko’s chest, but the Ukrainian’s head remained untouched thanks to his upper-body movement and punch-blocking ability.

‘I’ve sparred with a lot of champions, I’ve done many rounds with Mikey Garcia, but nobody compares to Lomachenko.’  – Michael Perez

Lomachenko began to speak with his father during the 1-minute rests over the second half of the session. He employed different tactics in Rounds 5 and 6, backing away from Perez to the center of the ring in hopes of drawing his sparring partner off the ropes. Perez took the bait, attacking the “easy” target a stationary Lomachenko presented behind a high guard, and the battle-tested New Jersey native paid the price for his zeal as he was countered – hard – to the body.

Win, lose or draw, Perez has always exhibited heart in compiling a respectable 25-2-2 pro record, but Lomachenko has a knack for chipping away the confidence of even the grittiest of tough guys. Rounds 7 and 8 seemed a bit cruel as he tripled and quadrupled his jab on a fatigued-looking Perez before snapping the fringe contender’s head back with straight lefts. However, the two traded heavy leather on even terms in the final minute of the session.

As camp progresses, Lomachenko will spar longer sessions with 3-minute rounds and his roster of sparring partners will expand beyond Perez. It’s hard to imagine that he will get even sharper during the month of April, but he will need to be at his best against Linares despite what fans and oddsmakers believe. 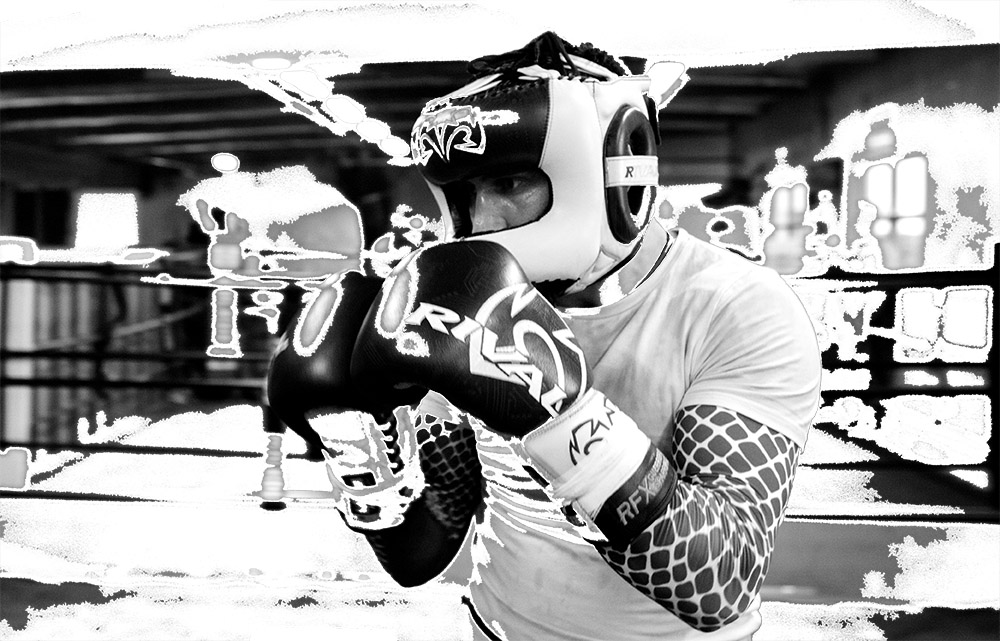 Lomachenko, who started camp at 146 pounds, still has the shoulders of a featherweight. He can carry 135 pounds (his 2012 Olympic gold medal was in the 132-pound division), but lightweight is not his optimum weight class.

“I’m really a featherweight,” Lomachenko said. “I fought at 60 kilograms as an amateur only because they changed the weight classes in the Olympics. I stayed at the new weight class rather than drop down and drain myself, but I’m not a natural 135-pounder.

“That’s why I dropped down to featherweight when I turned pro. I’ve gone up in weight for the challenges. Right now, I’m preparing for the lightweight title, but I’m not thinking about anything beyond this fight. I don’t know if I’ll stay at lightweight or if I’ll ever try to fight at 140 pounds.”

Whichever weight class he chooses to campaign in, Lomachenko will entertain. There’s showmanship in his blood. He didn’t mind THE RING’s cameras as he worked the heavybag following his sparring session, and he did tricks on the speedbag when he noticed a couple young amateur boxers peering at him from the top of the loft’s staircase.

Lomachenko’s captivated audience was 17-year-old Amado Vargas and 13-year-old Emiliano Vargas, sons of two-time junior middleweight titleholder Fernando Vargas. The brothers, who live in Las Vegas, were visiting their father’s hometown during their spring break and getting some training in at the Boxing Laboratory with their uncle Roger.

“Bro, that is sick,” Emiliano said, sounding a lot like his dad, as he watched Lomachenko bounce across the ring while doing a handstand on his knuckles. 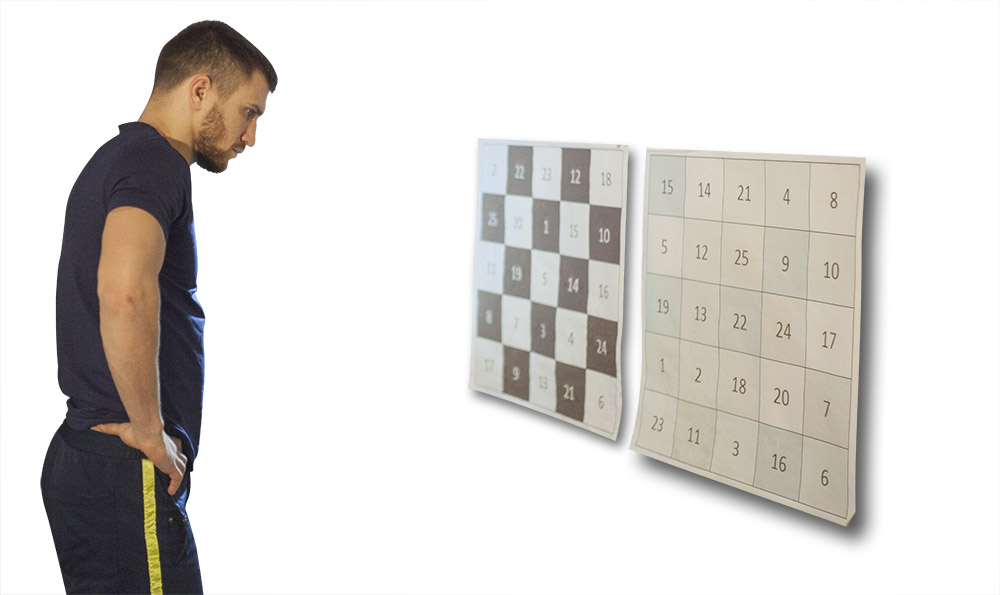 After two hours of physical training, Lomachenko engaged in 45 minutes of mental exercises with his sports psychologist, Andriy Kolosov. Lomachenko staring at a wall of checker-boxed numbers and arranging multi-colored blocks on the massage table isn’t as interesting to observe as his hopping “knuckle-stands,” but the disciplined intellectual stimulation obviously contributes to his uncanny in-the-ring reflexes and creativity.

“Since birth, his father has orchestrated what we see now.”

What we’re witnessing now is very rare for this era of boxing – a once-in-a-lifetime talent who wants to make the most of his prime.

“Of course, I want to fight the best,” said Lomachenko when asked if he was satisfied with his 2017 accomplishments and how 2018 has begun.

“I want the best names out there. Last year, whoever they put in front of me, whoever was available at that time, that’s who I fought. I did well. I was boxer of the year, so I must be doing something right.

“I’m starting this year off with a big fight, but I need to finish the same way.”