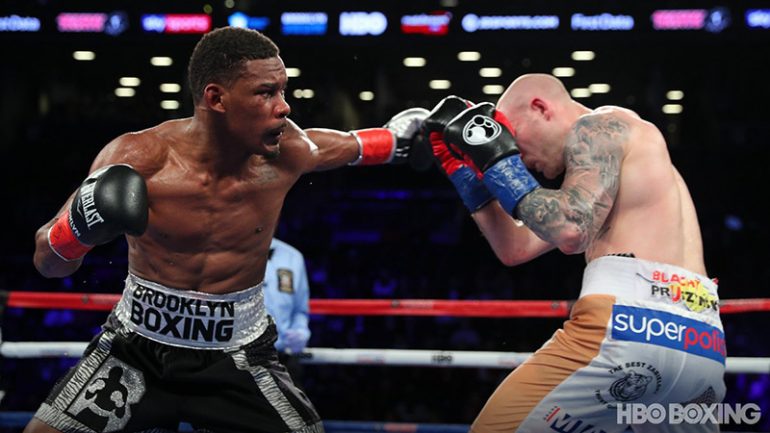 Daniel Jacobs showed excellent form against Maciej Sulecki and needed to be at his best to beat the Polish contender. Photo / @HBOBoxing
28
Apr
by Ryan Songalia

BROOKLYN, N.Y. — Danny Jacobs’ entrance into the Barclays Center felt more like a homecoming coronation than a non-title middleweight fight against Maciej Sulecki. Led out by several interpretive dancers, to the sounds of Kenderick Lamar and The Weeknd’s “Pray for Me”, Jacobs, wearing a T’Challa-inspired tunic, capped his Black Panther-style entrance by giving the cross-armed Wakanda salute to the announced crowd of 7,892 as fans chanted “Brooklyn!”

Jacobs (34-2, 29 knockouts) hadn’t fought in Brooklyn in nearly three years but his fans hadn’t forgotten about him.

If fights were won by popularity, it’d have been over before the first bell, but with an unbeaten record and WBA middleweight title shot at stake in this final eliminator, Sulecki wasn’t here to be anyone’s opponent. After 11 rounds of an otherwise lackluster performance, Jacobs finally awakened the offensive dynamo in him shortly into the 12th with a right hand to Sulecki’s face as the Polish fighter was set to throw his own.

Sulecki went down, got up and fought back, but it was just the punctuation mark Jacobs needed to solidify the victory and fend off the inevitable criticism for having gone the distance with a relatively unknown foe who had spent most of his career as a junior middleweight. 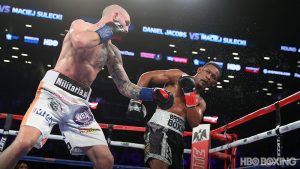 Though Jacobs had the flashier looking shots throughout, Sulecki (26-1, 10 KOs) trudged along with activity, landing right hands which threatened to ruin the storyline set forward.

Sulecki had his best round of the fight in the sixth, rocking Jacobs back with a straight right when Jacobs switched to the southpaw stance and peppered a few more right hands over Jacobs’ lowered left throughout the round. Jacobs began to bite down harder in the seventh and eighth and landed loud left hooks in the ninth round.

Jacobs continued to pound away in the 10th but was outworked in the eleventh before closing the show with his statement knockdown.

The performance isn’t likely to make Golovkin or Jermall Charlo lose sleep, but it keeps him in position to have a stake in the conversation.

“Ultimately we want the guys with the belts. We want to go for the guys with the straps but if we can’t go and get those guys we’re gonna go down the line of great contenders and challengers,” Jacobs said, before addressing the WBC interim titleholder whom he had confronted last month in the hallway of this very building.

“If Brooklyn wants Charlo, then Charlo where you at boy?”

Brooklyn seemed to want Charlo, and it seems that so do a significant number of fans.

Jacobs’ promoter Eddie Hearn, who has fielded countless questions in recent months about making a fight between his heavyweight champion Anthony Joshua and Al Haymon’s Deontay Wilder, acknowledges that network affiliations and other factors could make reaching an agreement with Charlo’s team difficult, but figures it’d be too sweet a deal to pass on.

“It’s all about money,” said Hearn. “Obviously you’ve got Danny on HBO, Charlo’s been boxing on Showtime, it’s always difficult but it’s a fight where both guys will make a lot of money. It’s a fight that would sell out the Barclays in a heartbeat.”

Jacobs’ trainer Andre Rozier believes Jacobs deserved the decision in March of 2017 against Gennady Golovkin and would like to see that rematch take place, but wouldn’t mind seeing his fighter in a “grudge match” with Charlo.

“He’s been talking a good one,” Rozier said. “Whatever is at the top of the mountain, that is what we want to climb.”