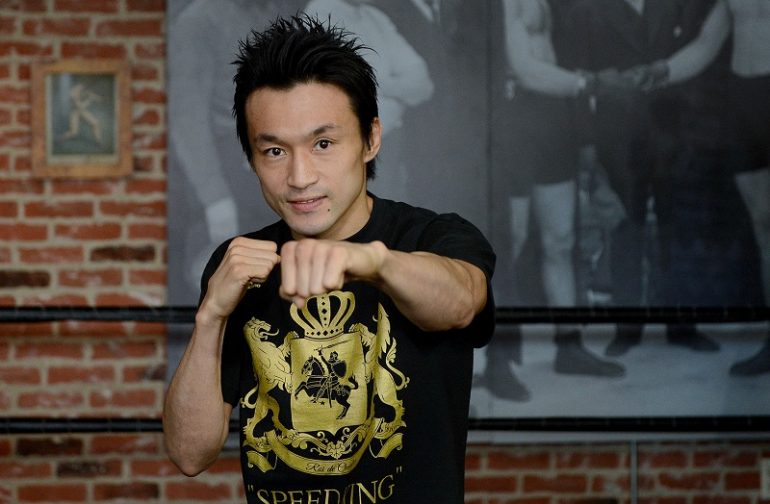 The fifth time was a charm when Toshiaki Nishioka made his final world title attempt. He refused to give up and his persistence was rewarded when he won the WBC junior featherweight title.

Nishioka was born in Kakogawa, Hyogo, Japan, on July 25, 1976. As a youngster, he played various sports but it wasn’t until his father recommended boxing when the then 11-year-old took part in the sport. Initially he wasn’t interested but after giving it a try, he became captivated. Boxing wasn’t popular in his hometown but he decided to stick with it and chose a professional gym near his home.

While at high school, he visited an ALA Boxing gym in Cebu, Philippines, and fought once a week for six weeks. He won all his fights, sometimes against strong opposition. It proved to be a good learning curve.

There was no amateur club at Nishioka’s school, so his unpaid career was limited, going 10-2. He wasn’t put off, instead gaining valuable knowledge as a sparring partner in gyms in Himeji, Kobe and Osaka. Because of his southpaw stance, at 17 years of age, he was selected as a sparring partner for Yasuei Yakushiji. He aided his countryman, who successfully unseated WBC bantamweight titlist Jung Il Byun.

“It was a very big experience for me,” Nishioka explained. “I had firsthand knowledge of feeling the raw power of a well-qualified boxer who would challenge for a world championship. I gained confidence that I was able to spar with a world champion.

“For me, without much amateur experience, sparring with world champions and other Japanese champions or ranked fighters was a great experience.”

Nishioka turned pro in late-1994; he lost his second and eighth fights but continued to improve and, in December of 1998, he won the vacant Japanese bantamweight title.

Over the next five years, he met long-reigning WBC bantamweight beltholder Veeraphol Sahaprom on four occasions. He lost the first and fourth encounters but fought Veeraphol to a draw in the second and third fights.

Nishioka resisted retirement and finally fought his way to a world title when he bested Napapol Kiatisakchokchai for the aforementioned WBC junior featherweight title.

He went on to make seven successful defenses and became universally recognized as the best junior featherweight in the world. He beat some impressive opposition Genaro Garcia (TKO 12), Jhonny Gonzalez (TKO 3), Rendall Munroe (UD 12) and Rafael Marquez (UD 12). However injuries slowed his career and he ultimately vacated his WBC crown. 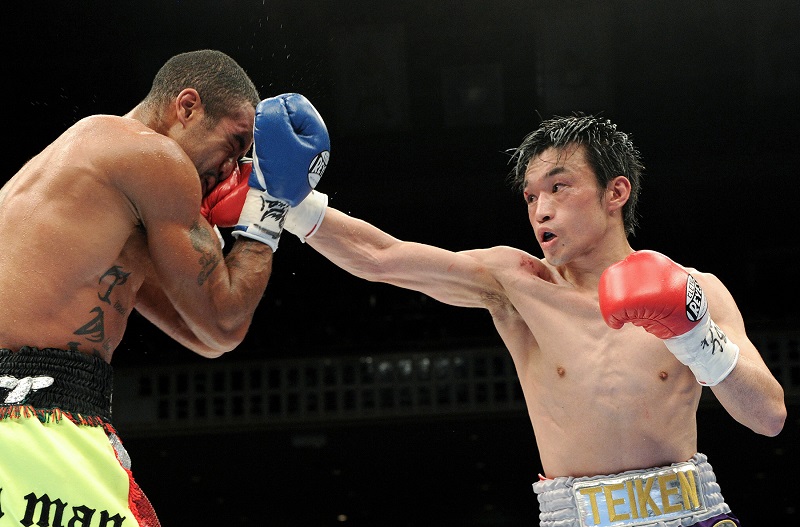 Nishioka fought Nonito Donaire in October 2013 for Donaire’s WBO belt and to fill THE RING Magazine title vacancy. He was past his prime and was stopped in the ninth round.

Nishioka decided to retire with a respectable record of 39-5-3 (with 24 knockouts).

“I would choose the bout with Rafael Marquez at the main event in Las Vegas,” he said. “Las Vegas is the holy place for boxers from around the world.

“When I was young, big fights in Las Vegas always fascinated me, so when I stood in the ring there and won, that must be the proudest moment for me.”

Nishioka, now 41, is married and has a daughter. He lives with his family on the outskirts of Osaka, in Amagasaki, in Hyogo Prefecture. He works as a commentator for WOWOW Excite Match and also manages a boxing gym called Nishioka Boxing-Fitness Gym.

RAFAEL MARQUEZ: He could throw long-range jabs as well as using his long reach. It was very difficult for me to go closer to him because of his jab. He could also use his left hand very well, in order to prevent opponents from coming closer. 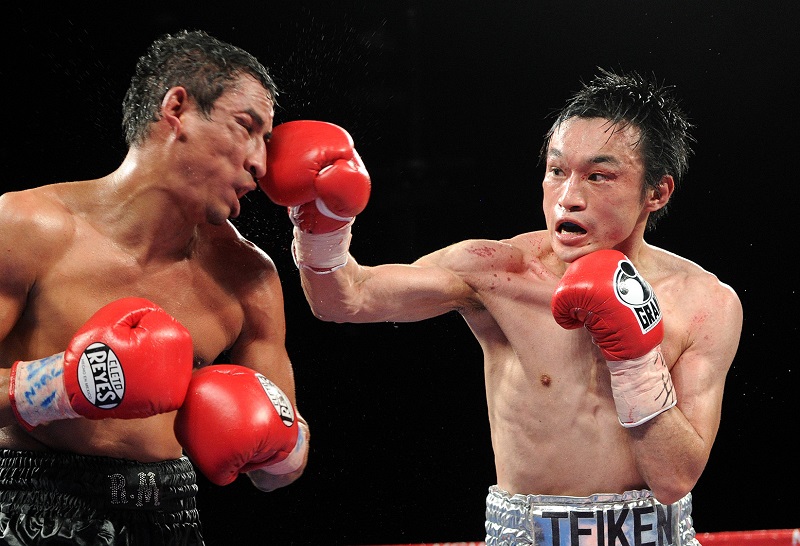 NONITO DONAIRE: He was really wonderful in defense, at that time, as you know that he was selected as the MVP boxer of the BWAA in 2012. He was very quick and fast in every aspect of footwork, response to punches of an opponent, lateral movement and his entire body work.

DONAIRE: His combination punches, in moving laterally, were very quick. They were very effective, since they were launched from the blind angle of an opponent. 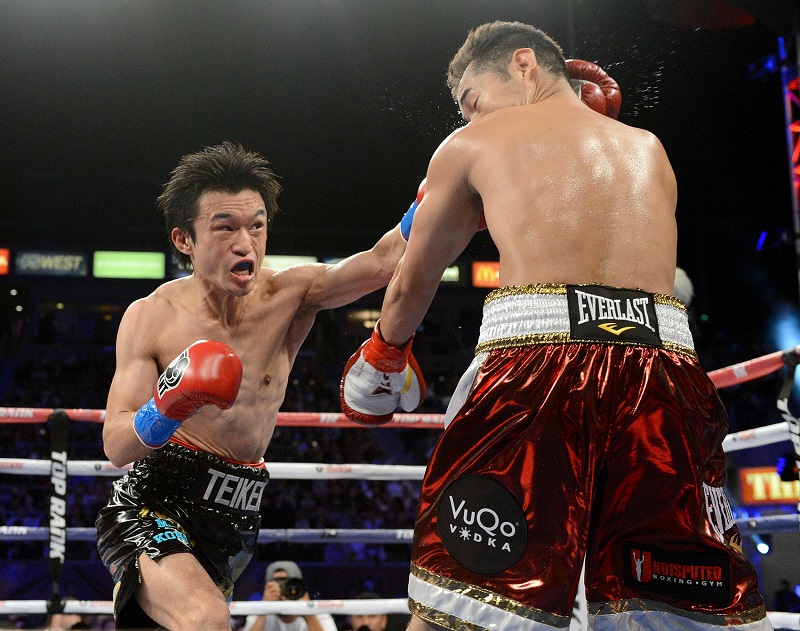 DONAIRE: He was able to use his footwork with minimum effort and move into the next attack. Every move he made was for a purpose, very smooth and fluid.

GENARO GARCIA: Regardless of me landing many powerful punches on him, he was able to throw punches with pressure against me. He was able to continue to try without quitting, to go forward to launch his solid punches, even if I hit him many times. If I stopped using my footwork, I could have got swept up by his constant pressure.

JHONNY GONZALEZ: He was a boxer who knew his own advantages and disadvantages. He could stop me by throwing long-ranged jabs by using his long reach, and then continuously throwing his favorite left hooks and left body shots. Once he felt that his opponent was damaged by his punches, he could immediately get closer to throw his double or triple punches. He understood that he did not have a strong chin; he would fight in a careful manner in the early rounds. He would throw and land his punches in the range where the opponent could not reach his punches. His punches were very powerful. If his offense pattern fit to his opponent, he could immediately rush to end the fight. In other words, he was a boxer totally knowing of himself.

DONAIRE: He had many different kind of punches with sharpness and edge. He could continue to move his body freely to get closer with his opponent, in order to throw his punches from blind angles. He had wonderful punches with high speed.

MARQUEZ: The battle-hardened Marquez could deliver his punches freely from long-range, mid-range and short-range. He threw long-range right and left hooks, initially from blind angles, but they reached his opponent. These punches are typical ones among Mexican boxers. In short range, he folded his long arms to land his powerful and accurate uppercuts, hooks and body blows. He was very good at managing any fight at his own pace by going the full distance, even if he was on the backfoot. I had to be careful the whole fight with him.

DONAIRE: In boxing, speed is a very important factor. At that time when I fought with him, he had devastating speed of punches and footwork. I do not think that a boxer moving around fast is a real speedster. I think that a real speedster moves around the bare minimum, in order to set up his next offense. That was Donaire. His speed in every moment was wonderful.