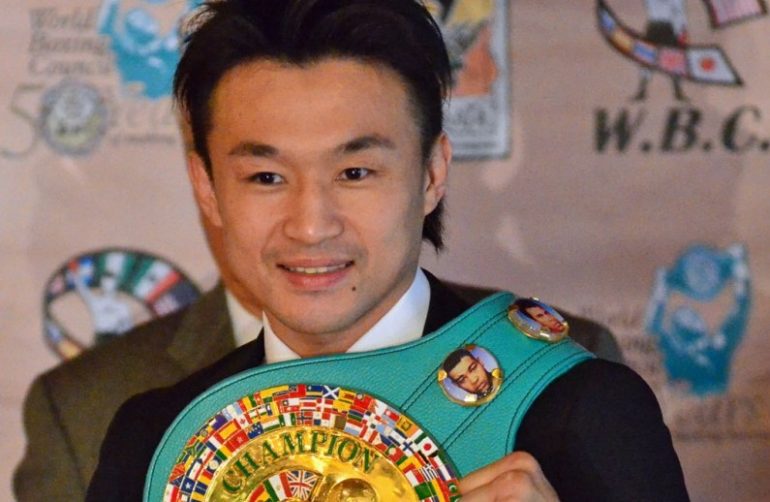 Photo courtesy of the WBC
23
Apr
by Anson Wainwright

The two would get to know each other very well over the next four years, meeting on four occasions total, sharing 48 rounds.

Throughout their storied rivalry, the Japanese fighter gave Veeraphol all he could handle but didn’t win any of their fights, losing the first and fourth encounters and drawing in the second and third.

“In the first fight, I had tactics to use speedy footwork in order to not let (Veeraphol) land punches to win,” Nishioka told RingTV.com through Tomoyuki Kataoka. “He seemed to be very aware of my speed and straight left punches. However my body work was uneven and I was hit too often by his jabs and he won rounds.

“At that time, I didn’t have basic fundamentals for a boxer to challenge for a world title. Up until that fight, I had fought only using my speed and a sense of boxing.”

Nishioka won two fights over the next seven months to earn a second shot at Veeraphol, in Yokohama, on September 1, 2001.

The challenger thought long and hard about how he could win, ultimately deciding to keep the fight at a distance. Nishioka felt that, while he entered the rematch in the best shape of any of the four bouts, Veeraphol was in his prime.

“He was upset because I fought at distance and he couldn’t land his punches against me,” Nishioka said of their second fight. “In the seventh round, I was close to knocking him out but the moment passed and the fight went to the scorecards. I am not a judge and accepted the result of a draw.”

Over the next two years, Nishioka was fairly inactive, fighting just once, due to tearing his Achilles tendon on more than one occasion.

The Japanese southpaw looked to find an edge and worked rigorously on running to build his stamina. In the middle of camp, his calf swelled up and, on the first day of sparring, he tore his Achilles.

Nishioka sought medical attention and, while attempting rehabilitation, again tore the Achilles, forcing him to have surgery.

It made him doubt that he’d ever box again but he motivated himself. Unfortunately he suffered another tear, leaving him unable to put weight on his left foot.

After several postponements, the two finally resumed hostilities, for a third time, at Kokugikan, Tokyo, on October 4, 2003.

“Because of those situations, my body condition was not as good prior to the third fight,” he said. “He was not in good condition and I could just move quickly because of the injury.”

The two fought in close quarters and, at the end of 12 rounds, the fight was declared a split draw.

Five months later, they met for a fourth and final time in Saitama, on March 6, 2004. Nishioka trained hard but, due to his lingering Achilles injury, his movement was restricted.

“I was not able to put weight on my left foot; instead I fought more on my right foot,” he explained. “That meant I had my head forward and leaning inwards.

“He used his right jab at the right time, on many occasions. In the early rounds, I cut my right eyelid and blood went into my eye. He moved around to his left side in order to go into my blind spot and hit me many times. During the 12 rounds, I couldn’t do anything.”

Nishioka lost a wide unanimous decision and it looked as though that may well have been the end for him.

However he was determined not to let those fights define him and, despite Teiken Promotions President Mr. Akihiko Honda advising him to retire, he refused to listen.

Seven months later, Nishioka resurfaced at junior featherweight against National champion Yoshikane Nakajima. After winning a unanimous decision, he made good on his promise to marry then-fiancée Miho.

The marriage gave him further strength, as he was no longer just fighting for himself; he now had a spouse to support.

“Since I began boxing in elementary school, my dream was always to become a world champion,” Nishioka said. “I was always convinced that I would be able to do so.

“However I was not able to perform very well and sometimes got knocked out during sparring. I was ready to give up boxing many times. I always continued training and believing that I could become champion. I overcame the hard times.”

Nishioka’s wife was a great source of motivation and continued to support him during the tough times.

In March of 2006, his daughter Kohime was born, giving him even more motivation.

“I was able to get a strong mind not to be defeated,” Nishioka said. “I thought that if I could not become a world champion, I would not be able to go forward. Then I continued to do training by believing in myself.”

After the final bout against Veeraphol, Nishioka won eight fights over a four-and-a-half-year period. He had worked himself into a high position with the WBC and was matched with another Thai fighter, Napapol Kiatisakchokchai (real name: Namchai Saru and also known as Napapol Sor Rungvisai), in Yokohama, on September 15, 2008 – on the same card Roman Gonzalez won his first world title – for the WBC interim junior featherweight crown (which would be upgraded to full titlist status prior to his next bout, almost four months later).

After boxing for 21 years, it wasn’t an opportunity Nishioka, then 32, was about to let pass. Buoyed by his family, he won a wide unanimous decision.

“For this fight, I concentrated on my training very hard,” he said. “I approached this knowing this would be my last chance to win a world title. I did my best to make my family’s dream come true. I threw punches from the first bell, as opposed to my normal style.

“When the ring announcer said I won, the delight that went through my body after trying for so long to become champion I could not express. It was a very, very long road.”