Carl Frampton: ‘Nonito Donaire is not someone you can write off’ 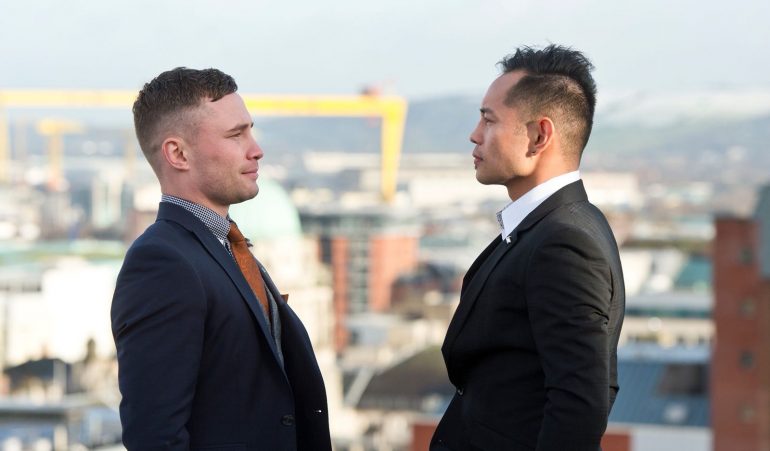 Frampton and Donaire made for a decent scrap at 126. Dougie thinks either veteran makes a good opponent for Gary Russell Jr. Photo by Mark Marlow / Frank Warren
17
Apr
by Tom Gray

There’s no world title on the line in the main event this Saturday in Belfast, but local fight fans couldn’t give a damn – it’s party time.

The city’s most acclaimed pugilist, Carl Frampton, faces off against former four-weight world titleholder Nonito Donaire in a swanky 12-round featherweight showdown at the SSE Arena, and this one is almost guaranteed to deliver.

“Donaire is a quality fighter, someone I’ve watched and admired for some time,” said Frampton in an interview with RingTV.com. “He’s the most decorated fighter I’ve been in with; a four-weight world champion who was as high as No. 3 on some pound-for-pound lists at one point.

“The fights you remember are him leaving (Fernando) Montiel twitching on the ground and (Vic) Darchinyan flat on his face. I admired Donaire and I was a fan. Later, our names were linked when I was (junior featherweight) champion and people were talking about a potential fight. We’ve been linked ever since I got to the highest levels.” 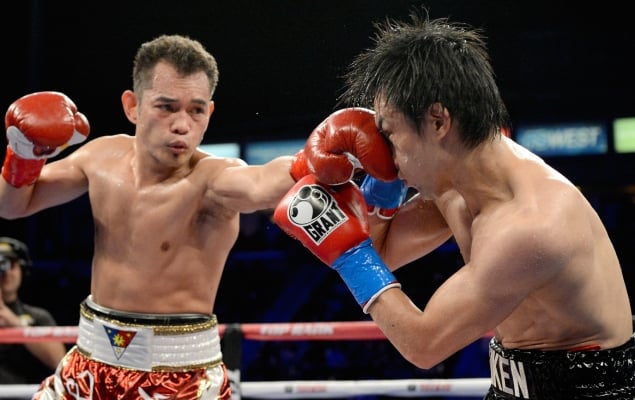 The respect Frampton has for Donaire is visceral and his preparation reflects that. The Belfast man has worked diligently through the course of a 12-week training camp and settled nicely with new trainer Jamie Moore. This will be their second training camp together and the pair will be hoping for a more impressive showing this time around.

In November, Frampton outpointed Mexico’s Horacio Garcia over 10 rounds. Despite getting off to a bright start, THE RING’s 2016 Fighter of the Year was given a count in the seventh before closing strong in a bruising battle. Frampton, however, had recently endured a messy split from manager and trainer team Barry and Shane McGuigan and only had seven weeks to prepare under a new coach. 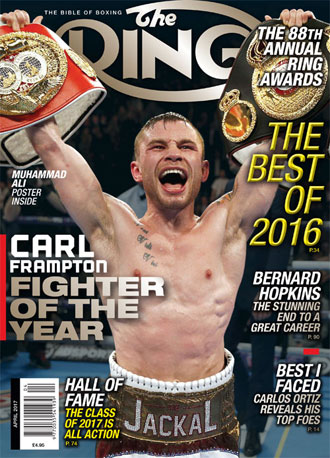 In the final analysis, the 31-year-old boxer-puncher was just glad to get 10 tough rounds under his belt.

“I could have gone in and blew (Garcia) away and kidded myself on that I was back to my best,” said Frampton, who insists that he learned from the experience. “I’ve re-evaluated things in training because that camp was too short. I’ve teamed up with new S&C guys who are the best in their field. I’ve also got a good nutritionist, Rachel Dawe, from the Manchester Institute of Health and Performance, overseeing everything.

“There’s no guesswork; they’re testing me all the time, monitoring my heart rate every single session, and they’re testing my lactic threshold every single session. It’s a very scientific approach because there are such fine margins at the top end of professional sport. It’s never too late to make changes, but I’m 31 years old now and I should probably have been doing this kind of thing earlier in my career.”

Ever since he dropped a majority decision to Leo Santa Cruz in January of last year, Frampton’s goal has been to regain a world title. With his star power and fan-friendly style, a title shot should only be a matter of time should he overcome the Donaire challenge. However, despite being at the twilight of his career, the California-based Filipino is nobody’s stepping stone.

“There’s options and things going on in the background, so promoters and managers need to be one step ahead of the game,” said Frampton. “They can look into the future, but I don’t want to take my eye off the ball here. I want to win this fight against Donaire and all this talk about (fighting at) Windsor Park (national soccer stadium) will come to nothing unless I do win.

“Donaire is not someone you can write off. He’s slick, he knows what he’s doing and he has that experience. I need to be switched on from start to finish, and then we can look into the winner of Lee Selby-Josh Warrington, or Oscar Valdez, providing he recovers from the broken jaw (he sustained in his victory over Scott Quigg) on time.”

As well as going head-to-head with Donaire, Frampton will also clash with Amir Khan this Saturday. The former unified junior welterweight titleholder makes his return to the ring against Phil Lo Greco in Liverpool, England, and Frampton was keen to point out why his clash with Donaire is the better option for fight fans.

“It’s a better show,” said Frampton, as though stating the obvious. “Without being disrespectful to anyone; Amir Khan is a quality fighter, but who the fuck is Phil Lo Greco? I hadn’t heard of him until this fight with Khan was announced. I see (Lo Greco) on social media trying to pretend he’s some sort of Mafioso, but look, if I’m a boxing fan, I know what show I’m watching.”

The bout will be broadcast live by BT Sport/ BoxNation in the U.K. and Showtime will air the action via their Facebook and YouTube channel in the U.S.