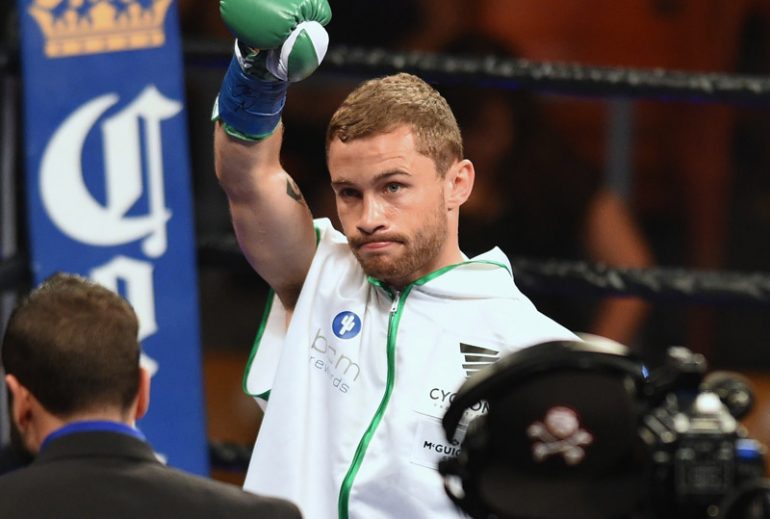 Carl Frampton has had a lot to contend with recently and it showed.

In a tougher than expect battle, the former two-weight world titleholder got back to winning ways with a 10-round unanimous decision over Horacio Garcia at the SSE Arena in his home city of Belfast, Northern Ireland, on Saturday. The official scores were 98-93, 97-93 and 96-93 in a bout that was contested at 127 pounds.

Frampton, who is rated No. 3 by THE RING at featherweight, clearly slipped on water in Round 7 and found himself flat on his backside. Referee Victor Loughlin incorrectly ruled it a knockdown which put pressure on Team Frampton in terms of the scoring. However, the Belfast man closed out well enough to prevail in a tough fight.

“It was good for the fans, but I got myself caught up in a fight,” said Frampton in an interview with BT Sport in the U.K. “That got the rust off and now I want one of the big boys. A few of the champions are tied up, but if I have to wait around and get one of them at Windsor Park (national soccer stadium) in the summer, that’s what I want.”

A terrific left hook from Frampton (24-1, 14 knockouts) in the opening round was only one of several brilliantly picked single shots from the home fighter. Garcia knew he was in deep from the start, although he barely blinked when he was tagged and displayed excellent durability. That would become a hallmark.

The Mexican contender had sporadic success, mainly to the body, but the difference in class was obvious. Frampton either led and landed clean or he feinted the visitor out of position before exploiting the openings. Early on, it was a turkey-shoot fought at Frampton’s pace and Garcia looked out of his depth.

However, the visitor had a good fourth round due mainly to an intense workrate. Frampton laid back and focused on his defense, although he still found some terrific counters in the closing seconds of the session. The pattern was changing, however, and Garcia (33-4-1, 24 KOs) had joined the fight in earnest.

A small cut, caused by a punch, opened near Frampton’s right eye in the fifth. Now on a full head of steam, Garcia came out blazing in the sixth and posted another good session. The Mexican was working extremely hard and he was eating up Frampton’s return fire with ease.

The 10-8 round which went against Frampton in the seventh created serious urgency and the home fighter came out to make a serious impression in the eighth. Frampton smartly went back to punch picking while using his feet to stay out of harm’s way and, in doing so, claimed the round decisively.

Again, Garcia would not be outdone and he matched Frampton punch for punch in an explosive ninth. The only thing better than that round was the 10th when Frampton unloaded the kitchen sink. The Mexican slugger soaked up everything that came his way, but he was now well behind on points despite a gallant effort.

Within the last year Frampton has lost his first professional fight; to Leo Santa Cruz, split from manager/ trainer team Barry and Shane McGuigan and had a fight against Andres Gutierrez cancelled at the 11th hour when the Mexican injured himself after slipping in the shower. It’s been a soap opera and the Belfast star will just be happy to put it all behind him.

With Frampton’s status and name-recognition, one would expect him to be in a big fight sooner rather than later. The only stumbling block could be scheduling. Santa Cruz, the WBA titleholder, is likely to face Abner Mares in a rematch, while IBF kingpin Lee Selby is being lined up to face domestic rival Josh Warrington. That leaves Gary Russell Jr. and Oscar Valdez, who hold the WBC and WBO belts respectively.

Regardless, it’s good to have Frampton back in the mix and there will be more big fights in his future.