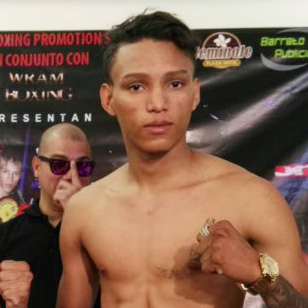 In the span of two days, Daigo Higa lost his WBC flyweight title, and then he lost his undefeated record.

The Japanese fighter, who entered the week having finished all 15 of his foes inside the distance, missed weight by two pounds on Saturday, and then sustained his first defeat when his corner threw in the towel at 1:42 of the ninth round of his bout against Nicaragua’s Cristofer Rosales Sunday at the Yokohama Arena in Japan.

Two judges had the scores close at 76-76 and 77-75 for Rosales, while a third had it 79-73, which is more in line with the action that preceded the stoppage.

Despite comfortably making the weight, Rosales (27-3, 18 knockouts) appeared the larger of the two and masterfully controlled the range with multiple jabs. The tactical advantage translated to physical punishment in the fourth as Higa (15-1, 15 KOs) was chased around the ring, getting his head popped back by right crosses and uppercuts.

Higa was hurt for the first time in the fight by a left hook in the fifth, and immediately backed up. Even when he got the preferred terrain, fighting shoulder to shoulder, it was Rosales who got the better of exchanges, pushing him back and walking him down.

Even with his eyes closing, Higa kept throwing, landing his best shots in the sixth and seventh with left hooks to the body. A rally in the seventh with hooks to the body and head energized the crowd but it would be his final hurrah, and following a torrid eighth round he started towards the wrong corner before finding his way back to his own. The fight was stopped shortly into the ninth, and the conclusion was met by dead silence from the arena.

The win is a big boost to the career of the 23-year-old Rosales, who had previously lost decisions to current WBA junior bantamweight titleholder Khalid Yafai and top-rated flyweight Andrew Selby, while dampening the momentum of Higa, 22, RING’s no. 2 rated flyweight, as he heads up in weight.

There was far less drama in the main event as 2012 Olympic middleweight gold medalist Ryota Murata (14-1, 11 KOs) lifted the fans’ spirits with an eighth-round stoppage of Italy’s Emanuele Blandamura (27-3, 5 KOs).

A sweeping right hand sent the 38-year-old Blandamura tumbling into the ropes, prompting the referee to stop the fight at the 2:56 mark of an increasingly one-sided affair. The scores at the time of stoppage were 70-63, 68-65 and 69-64, as Murata retains the WBA’s secondary “regular” middleweight title.

Murata, 32, wins his second straight at home following his controversial split-decision loss to Hassan N’Dam in May of 2017.