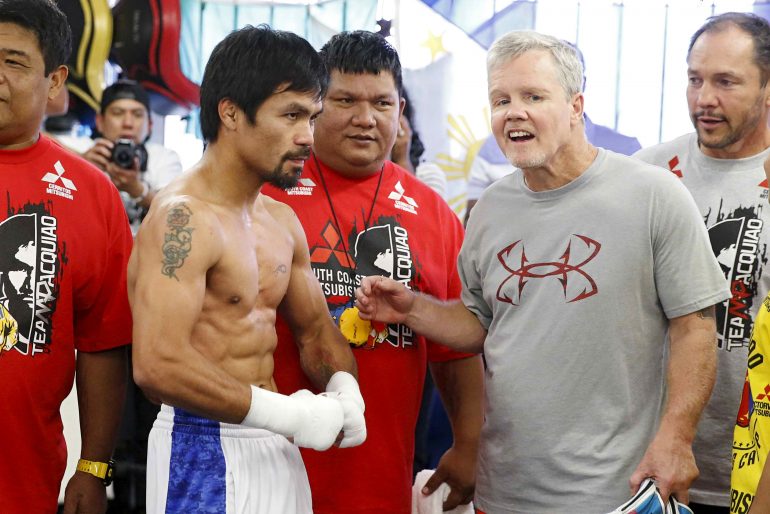 Manny Pacquiao and Freddie Roach joined forces to reach unthinkable heights, but all good things must come to an end.

For months, speculation has run rampant that when the Filipino senator returned to the ring, it would be without Roach in his corner. Now that Pacquiao is preparing to begin training camp for his welterweight fight against Lucas Matthysse on July 15 in Malaysia, he made the move official in a press release Friday.

Pacquiao, 39, will be trained by Restituto “Buboy” Fernandez and Raides “Nonoy” Neri. Out is Roach, who has trained Pacquiao at his Wild Card Boxing Club in Hollywood, California, since Pacquiao made his U.S. debut in 2001.

Through 16 years and 34 fights, Pacquiao and Roach made history. Pacman became the only boxer ever to win titles in eight weight classes and scored wins over the likes of Erik Morales, Marco Antonio Barrera, Juan Manuel Marquez and Miguel Cotto. Pacquiao lost to Floyd Mayweather, but it shattered all revenue records. Together, Pacquiao and Roach made millions.

Pacquiao and Roach have been synonymous in boxing, and will be forever. But as Pacquiao enters the twilight of his career, he’s moving on.

“Manny and I had a great run for 15 years — longer than most marriages and certainly a rarity for boxing,” Roach said in a statement. “I wouldn’t trade any of it. Inside the boxing ring and the political ring, I wish Manny nothing but the best.

“I would be lying if I [said] I wasn’t hurt that he didn’t contact me personally about his decision, but the great times we enjoyed together far outweigh that.”

Pacquiao was controversially defeated by Jeff Horn in July, and that’s where the trouble began. Two weeks after the bout, Roach wondered what was going on between him and his longtime fighter.

“I was trying to see where his head was at, and I could not even get him to say hi to me,” Roach told Sports Illustrated at the time. “I don’t know if he was upset with me or what.

“I really don’t know if he’s mad at me. But I can tell you this: I haven’t been paid yet. So who knows?”