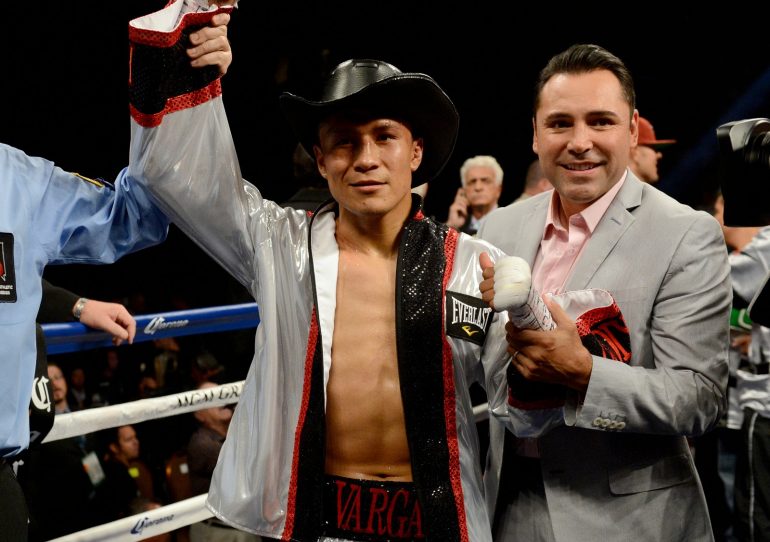 Former junior lightweight titleholder Francisco Vargas has been battling more than just his opponents of late.

As if fighting Miguel Berchelt and Orlando Salido were not challenging enough, Vargas has had to deal with weak scar tissue over both eyes due to significant cuts from hard-fought battles throughout his career.

Recent surgery on the scar tissue and rest has been the solution so far. Now Vargas is gunning for an opportunity to regain a world title.

For that to happen, the teak tough Mexico City star must get past Rod Salka tonight at the Fantasy Springs Resort Casino in Indio, California. The 10-round bout will air live on ESPN2 and ESPN Deportes (10:00 p.m. ET/ 7:00 p.m. PT).

Vargas, who is rated No. 5 by THE RING at junior lightweight, tipped the scale at an even 130 pounds at Thursday’s weigh-in, while Salka weighed in one pound heavier.

The 33-year-old Vargas (24-1-2, 17 KOs) is coming off a ninth-round technical decision victory over former world title challenger Stephen Smith on Dec. 9 in Las Vegas. This was “El Bandido’s” first bout since having surgery and both eyes held up well.

“It was good for me,” Vargas told RingTV.com in a recent interview. “After the Berchelt fight (on Jan. 28 of last year), I had surgery and a long rest. I came back to the ring on Dec. 9 and that was very beneficial for me. Thankfully, there was no damage.”

Now Vargas squares off against Salka (24-4, 4 KOs), who has won five bouts since a knockout loss to Danny Garcia in August 2014.

Many favor Vargas to win, but the former champion is not overlooking his opponent.

“We know (Salka’s) going to come in prepared because it’s a great opportunity for him,” said Vargas. “He’s a solid technical fighter. He’s quick. It’ll be a good fight for me. A good test. We’ve worked very hard in the gym to guarantee a win.

“He’s at his best at (130 pounds). We’re preparing for a good fighter with the experience he has.”

Vargas would like to seek revenge against Berchelt or Salido. An impressive victory could push him closer to a shot at the WBC junior lightweight title, which Berchelt still holds. A rematch against Salido could bring about another “Fight of the Year” nomination.

“We do want those rematches with Salido and Berchelt,” confirmed Vargas. “We want those fights against the strongest fighters at 130 pounds. First, we have to win this (Salka) fight. Once that happens, we can sit down with my team and decide what the options on.”