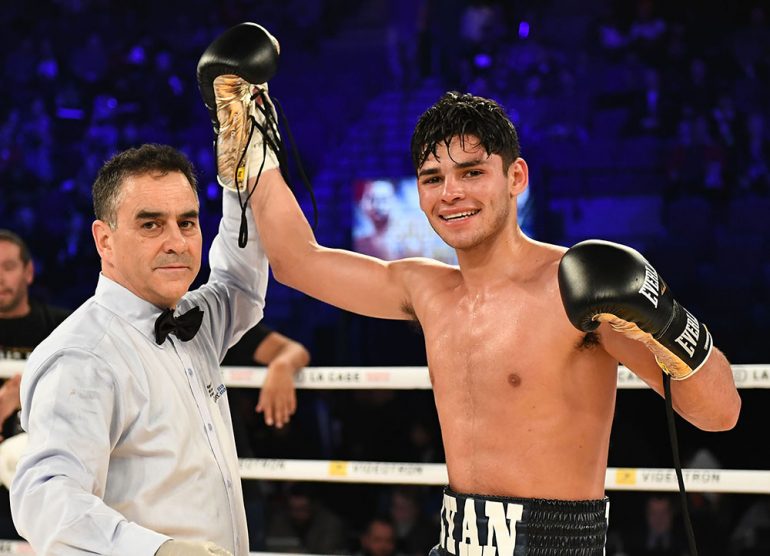 If there was a world title belt for using Twitter, junior lightweight Ryan Garcia would be a legitimate contender.

The 19-year-old boxer-puncher has made quite the impression on boxing fans, good and bad, along with the demographic that is not too accustomed to following the sport: teenage women.

As much as Garcia enjoys dishing out tweet after tweet, he prefers to dish out combination after combination on his opponents, knowing the more flashy his victories the more he advances his career and popularity.

Garcia will attempt to make an impression on live network television tonight, when he squares off against former world title challenger Fernando Vargas at the Fantasy Springs Resort Casino in Indio, California. The 10-round bout will headline a ‘Golden Boy on ESPN’ telecast (ESPN and ESPN Deportes, 9 p.m. ET/ 6 p.m. PT).

At Thursday’s weigh-in, Garcia tipped the scale at 129.6 pounds, while Vargas weighed in at 129.2 pounds.

Garcia (13-0, 12 knockouts), who resides in Victorville, California, has built an unbeaten record while facing and defeating modest opposition. His most notable win as a pro occurred on November 2, when he notched a third round knockout victory over Cesar Valenzuela, who entered the bout having defeated three unbeaten prospects.

In his last bout on December 16, Garcia stopped Noe Martinez in the eighth round.

Tonight will not mark the first time Garcia has fought on ESPN. He scored an impressive, highlight-reel first round knockout victory over Miguel Carrizoza on September 15 in Las Vegas.

Garcia is in the unique position where he can prove hardened boxing fans and critics with an impressive victory over Vargas, a former world bantamweight title challenger. He can also impress a growing fan base of mostly high school-aged young ladies, most of whom make up the approximately 39,000 on Twitter (as of Thursday night).

Tonight will also mark the first time Garcia will headline an ESPN telecast. He hopes it will not be his last.

“I’m so excited to be in the main event,” said Garcia, who recently called out former IBF junior lightweight titleholder Gervonta Davis. “This is just the first chapter of my book.”

Vargas (32-13-2, 21 KOs), who resides in Tijuana, Baja California, Mexico, last fought for a world title belt in April of 2016, losing by knockout in the ninth round to WBA bantamweight titleholder Jamie McDonnell.

Vargas, who is 10 years older than Garcia, has lost his last two bouts by decision to Horacio Garcia and Bekman Soylybayev, respectively. Vargas presents the most formidable test for Garcia and it will be interesting how Garcia approaches the fight, whether he wants to score another spectacular knockout or cruise to a decision win.

“If I see an opening for a knockout, I all take it. If I have to slow down, then I’ll do it. This March 22, expect something big. I have a vision: I might sleep him with the first shot I throw. I’m going to speak it into existence.”

In the co-feature, Keandre Gibson will face Eddie Gomez in an intriguing 10 round welterweight bout.

In the swing bout, Irish amateur standout Aaron McKenna (1-0) will square off against Jose Palacios (1-1) in a four-round junior middleweight bout.