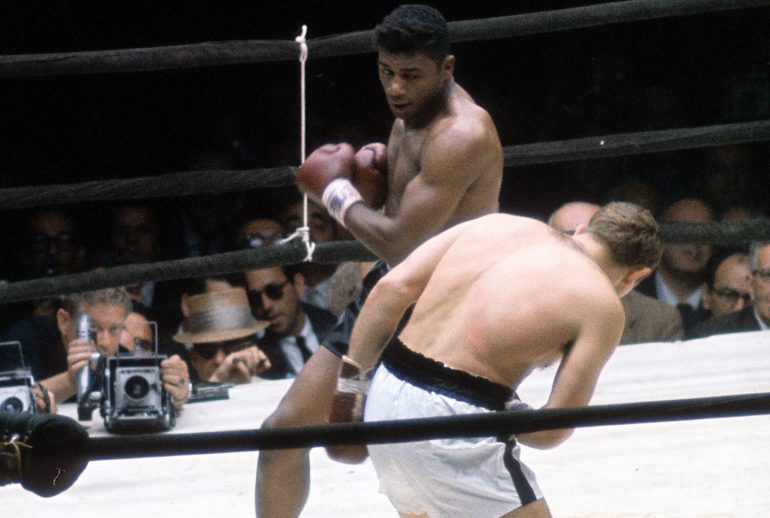 Floyd Patterson (left) in the process of regaining the lineal heavyweight championship against Ingemar Johansson in their second fight. Photo by THE RING Archive
28
Feb
by Lee Groves

READ ON RINGTV.COM – THE REAL HEAVYWEIGHT CHAMPIONSHIP OF THE WORLD AND ITS HISTORY – PART 1

Archie Moore, still the reigning light heavyweight champion, had won 11 straight since losing to Marciano and thus was deemed worthy of a crack at Marciano’s vacated championship. Standing in the other corner was Floyd Patterson, who won a gold medal as a 17-year-old middleweight at the 1952 Olympics staged in Helsinki, Finland. He entered the Moore bout with a glittery (30-1, 21 knockouts) record thanks to his lightning-quick fists, peek-a-boo defense and thunderous power that belied his 182-pound frame.

Barring a draw, history would be made no matter who won the fight. If Patterson prevailed, he would, at 21 years 336 days, break Joe Louis’ record for being the youngest heavyweight champion on record by more than a year (23 years 46 days) while if Moore emerged victorious, he would, at 39 years 362 days, become the oldest fighter to win the crown, shattering Walcott’s previous record of 37 years 245 days.

Three factors may have persuaded the smart money to make Moore a slim 6-to-5 favorite. First, Moore’s vast edge in experience. Second, Patterson suffered an injury to his right hand during his most recent bout, a 12-round split decision over Tommy “Hurricane” Jackson five-and-a-half months earlier. Finally, Patterson’s only loss as a pro was an eight-round decision to Joey Maxim two-and-a-half years earlier, the same Maxim who Moore dethroned for the light heavyweight championship in December 1952. If Patterson thought the 105-fight veteran Maxim was ring savvy, Moore, with 189 fights under his belt, was even more so. Worse yet for Patterson, Moore had scored more knockouts than any other fighter in history with 116.

A near-capacity crowd of 14,000 at Chicago Stadium witnessed this battle of the ages, which was, for the most part, dominated by Patterson’s vastly superior hand speed. In round three, Patterson’s fists opened a cut on the bridge of the nose near the left eye, while Moore equalized later in the round with a slight cut over the left eyebrow. While three consecutive Patterson hooks stunned Moore at the end of the third, Patterson believed another punch — a left to the body — was the one that irreparably swung the fight in his favor.

“I landed a left in his stomach and I heard him say ‘ugh,’ or something like that,” Patterson told the Associated Press. “I knew then I had hurt him and I knew I could beat him.”

With his self-belief surging, Patterson increased the pressure and invested more power in each punch. A whipping hook to the jaw in round five sent Moore spinning, then pitching face-first to the canvas. Moments after rising at nine, a short left drove Moore to his haunches, and, this time, boxing’s Methuselah couldn’t beat referee Frank Sikora’s 10-count. At the time of the stoppage Patterson led on two scorecards (20-17 by referee Sikora and 20-16 by judge Jim McManus) while the third judge, John Bray, had the fight even at 18-18.

“I felt Floyd Patterson is a vastly improved fighter,” Moore said in his dressing room. “He has potentialities of being a great fighter when he gets some experience. I felt confident I could beat him but I also learned that youth can be too much. I came up the long, hard road, but when I got there I found the door slammed shut.” 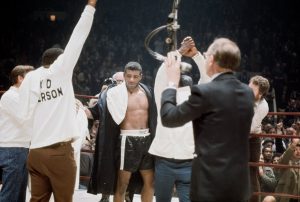 The Marciano line of succession continued with Ingemar Johansson, Patterson (who became the first man ever to regain the world heavyweight championship), Sonny Liston and Cassius Clay, who subsequently changed his name to Muhammad Ali after joining the Nation of Islam. Ali’s spiritual beliefs, his hostile stance in terms of serving in the military during the Vietnam War and his willingness to sign for an immediate rematch with Liston thrice prompted authorities to strip him of its title.

The first occurred on March 22, 1964 when WBA president Ed Lassman stripped Ali for inking a direct rematch with Liston, which went against the organization’s bylaws. Lassman reversed himself two days later, stating he would wait until the sanctioning body had time to assess evidence collected by the ongoing Senate probe into boxing. On August 29, 1964, moments after the site of the Ali-Liston rematch was announced, the WBA unanimously voted to strip Ali of his belt for the second time.

Although the WBA initially arranged a four-man tournament involving Patterson, Ernie Terrell, Cleveland Williams and Doug Jones to fill their vacancy, it never took place. Instead, in a nod toward tradition, Terrell was matched with Eddie Machen in Chicago on March 5, 1965. Terrell might have been the native son, but the crowd inside the International Amphitheatre rooted loudly for Machen, the 9-to-5 underdog. Much of the fight was an ugly clinch-fest, but Terrell landed enough jabs in the early rounds to capture a dull but unanimous decision (72-67, 72-66 and 70-67 under the five-point must).

Ali, still the owner of the line of succession, re-united the belts by beating Terrell over 15 emotionally-charged rounds in Houston on February 6, 1967. However, 37 days after stopping Zora Folley to retain the championship, Ali traveled to Houston and, as expected, refused to accept induction into the U.S. Army. This act not only resulted in the WBA’s third stripping of Ali, it also prompted all jurisdictions except for the British Boxing Board of Control (who held on until mid-1969) and THE RING to withdraw their recognition.

To fill its vacancy, the WBA assembled an eight-man, seven-fight tournament involving Terrell, Patterson, Jimmy Ellis, Leotis Martin, Thad Spencer, Jerry Quarry, Oscar Bonavena and Karl Mildenberger. Though Terrell, Spencer and Mildenberger were among the favorites at the start of the tournament, it was Ellis and Quarry who advanced to the final, which was staged April 27, 1968 in Oakland, just 275 miles northwest of Quarry’s birthplace of Bakersfield.

Quarry was the 7-to-5 favorite coming in, but the odds would have been vastly different had anyone known that the “Bellflower Belter” entered the ring with a broken back thanks to a “friendly wrestling match” with one of his brothers several weeks earlier. Quarry’s injury, combined with Ellis’ intelligent boxing, turned the tournament final into a sleepy affair won by Ellis on majority decision that most thought should have been unanimous.

“I stuck to my fight plan,” Ellis told a United Press International reporter. “I really wasn’t worried about getting pinned on the ropes by Jerry because I knew I was fast enough to slip away if I had to.”

Though disappointed, Quarry was honest.

“If they’d given me the decision, I’d have given it back,” he told Sports Illustrated’s Mark Kram. “I didn’t deserve it.” 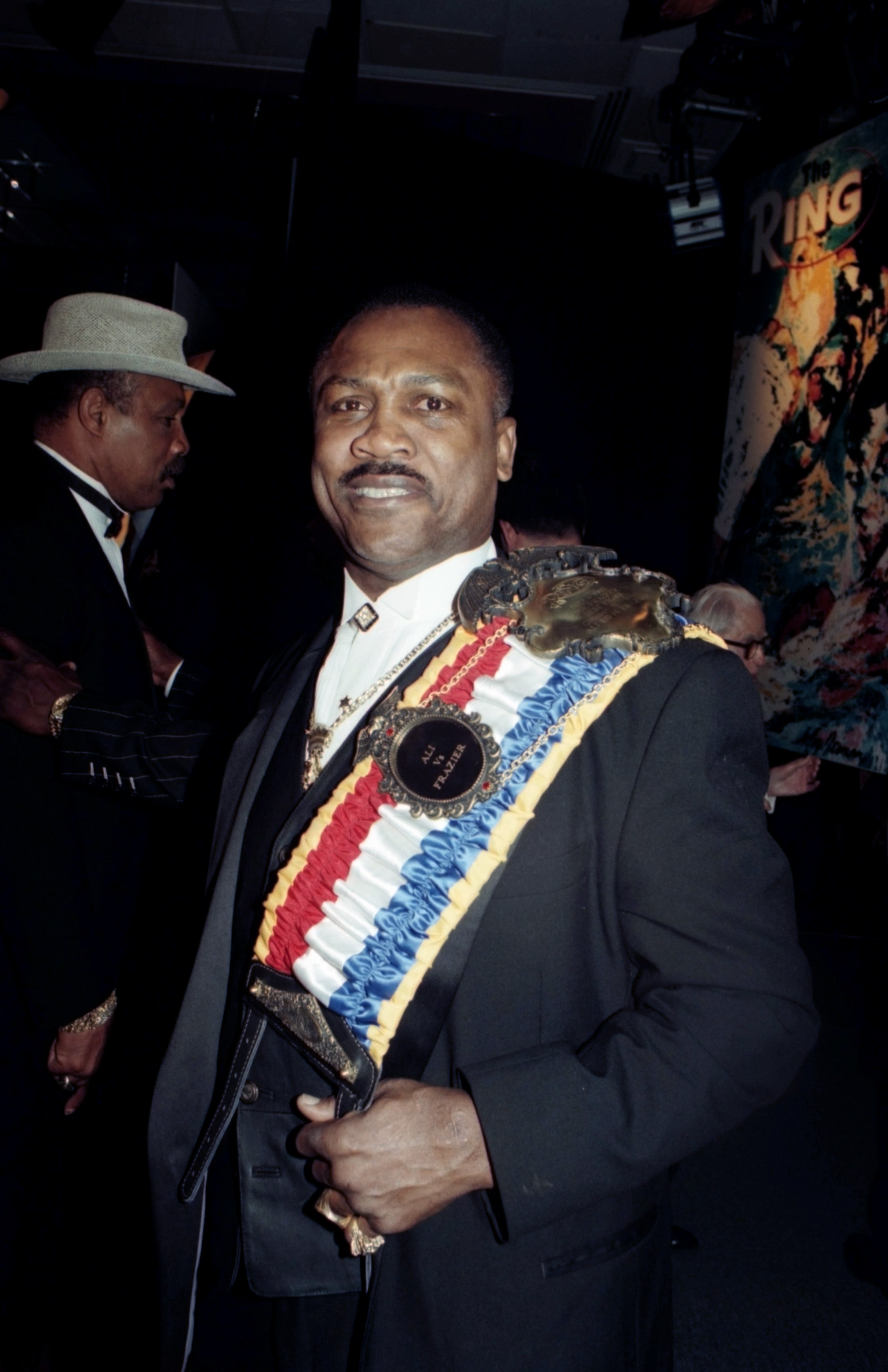 Joe Frazier was offered a spot in the WBA tournament, but his management opted to go after the New York State Athletic Commission version of the title, which, at the time, was recognized by only four states — New York, Massachusetts, Illinois and Maine. There, he was matched with Buster Mathis, who outpointed Frazier to win a spot on the 1964 U.S. Olympic team but was forced to surrender it to Frazier (the alternate) after suffering a hand injury in training. Frazier went on to win the gold medal in Tokyo despite a broken thumb and as a pro he raced to a record of 19-0 (17) that included impressive victories over Doug Jones (KO 6), George Chuvalo (KO 4), Eddie Machen (KO 10) and Oscar Bonavena (a twice-off-the-floor W 10). Mathis, the 2-to-1 underdog, entered the bout with a (23-0, 17 KOs) record that featured few recognizable names. Despite his bulk (he weighed 243 1/2 to Frazier’s 204 1/2) and gelatinous physique, Mathis possessed the hand speed and mobility of a much lighter man.

Frazier-Mathis, along with the rubber match between middleweight champion Emile Griffith and challenger Nino Benvenuti, opened the newest version of Madison Square Garden. More than 18,000 witnessed the double-header that saw Benvenuti regain the crown he had lost to Griffith five months earlier and Frazier capture the NYSAC version of the heavyweight title with a vicious 11th round knockout over the bloodied and battered Mathis.

It took nearly two years to arrange a unification match between Ellis and Frazier, and in that time Ellis fought just once (a hotly disputed decision win over Patterson in September 1968) while Frazier disposed of Manuel Ramos (KO 2), Bonavena (W 15), Dave Zyglewicz (KO 1) and Quarry (KO 7). The fight drew a crowd of 18,079 and a gate of $647,997, which set a new indoor record for a card featuring a single championship fight.

Additionally, Frazier-Ellis would determine the successor to Ali in terms of the “line of succession.” That’s because in the May 1970 issue of THE RING, writer Dan Daniel, opining on behalf of editor-in-chief/founder Nat Fleischer and the remainder of the staff, announced the magazine had withdrawn its recognition of Ali and would deem the winner of Frazier-Ellis as the true champion.

“THE RING decision was made without a dissenting voice,” Daniel wrote. “It also was voted that the winner of the Frazier-Ellis fight would be recognized by this magazine as the new heavyweight champion of the world. If, as many skeptics predict, Clay changes his mind about quitting the ring and the lush paydays which would become available to him if he were cleared by the Supreme Court, Cassius would have to appear as the challenger, and emphatically not as the champion.”

Oddsmakers deemed Frazier a heavy 6-to-1 favorite and from first bell he showed everyone why. Frazier’s signature hooks landed with frightful authority and while Ellis managed to break through the guard from time to time, his blows lacked the steam to impede Frazier’s progress. Frazier asserted his superiority in the final minute of round four by scoring two left-hook knockdowns, the first of which left Ellis on his stomach and the second of which left Ellis on his back.

“When I hit him,” Frazier said. “My hands felt like when you hit a baseball real good with the bat and it goes sailing out into the open field.”

The WBA titlist managed to scramble to his feet both times but Dundee only had to look into Ellis’ eyes once before deciding to stop the fight.

But while Frazier owned all available belts and had the blessing of “The Bible of Boxing,” in many minds he didn’t own the “real” heavyweight championship. In their minds, that honor still belonged to Ali, who, while exiled, remained undefeated and unconquered.

Seven months after Frazier destroyed Ellis, Ali regained his boxing license and on October 26, 1970 stopped Quarry on cuts in round three. After Frazier blasted out reigning light heavyweight champion Bob Foster in two rounds and Ali scored a 15th round knockout of Bonavena, “The Fight” was now on.

Lee Groves is a boxing writer and historian based in Friendly, West Virginia. He is a full member of the BWAA, from which he has won 15 writing awards, including 12 in the last seven years and two first-place awards since 2011. He has been an elector for the International Boxing Hall of Fame since 2001 and is also a writer, researcher and punch-counter for CompuBox, Inc. He is the author of “Tales From the Vault: A Celebration of 100 Boxing Closet Classics (available on Amazon) and the co-author of the upcoming book “Muhammad Ali: By the Numbers.” To contact Groves, use the e-mail [email protected]