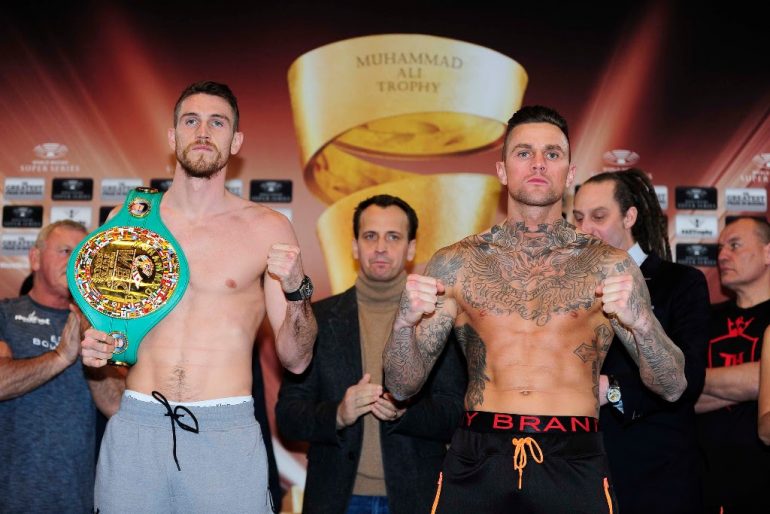 George Groves must be licking his chops.

He was ringside Saturday as Callum Smith failed to impress against late replacement Nieky Holzken, a former kickboxer. The Dutchman took the fight on five days’ notice after Juergen Braehmer came down with the flu, and he gave Smith trouble at times.

But it wasn’t enough, and Smith scored a unanimous decision (118-110, 117-111 twice) to advance to the World Boxing Super Series finals, where he’ll meet Groves to decide super middleweight supremacy.

“To be honest with you, it was a little bit disappointing, I wanted to fight Juergen Braehmer,” said Smith, THE RING’s No. 3 super middleweight. “He was game, I thought he was strong, he came forward. I underestimated him probably, yeah.

“Tonight was about not taking any chances, using me jab and making sure I’m in that finals. Fingers crossed he can recover and we can get it on. He’s the man to beat in the tournament.”

Smith (24-0, 17 knockouts) used his jab and plenty of movement to fend off Holzken, who was fighting in a scheduled 12-round bout for the first time. The difference in experience and pedigree was apparent, but Holzken was able to back up Smith time and again.

He landed a few wild shots on Smith in Round 5, but most of his aggression was ineffective, with Smith happy to counter off the ropes.

“Good job with his jab but I think I hit him the most with the power shots and had him going backwards all the time,” said Holzken (13-1, 10 KOs). ” … Today i was the dominator. What would it be if I trained three months for this guy?”

And now Smith will have his chance to prove he’s the best 168-pounder in the world, and he’ll have to be a lot better to win the tournament against Groves, who owns the edge in the experience department and is the one with the title around his waist.

Groves fended off Chris Eubank Jr. last week and dislocated his left shoulder, but he’s “extremely confident” he’ll be ready for the finals this summer.

“It wasn’t the best Callum Smith I’ve seen before,” said Groves, THE RING’s top super middleweight. “He seemed a little flat but I know he had an up-and-down week and was preparing for a different opponent.”