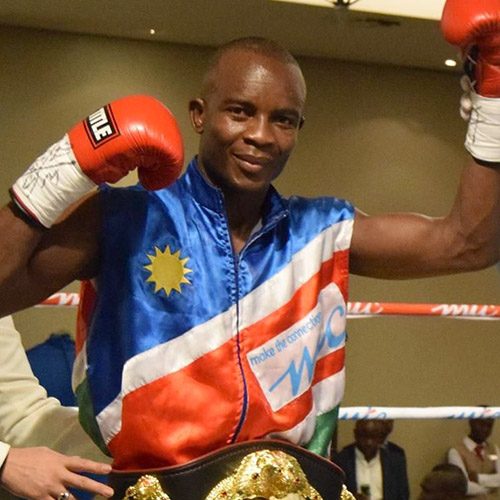 Julius Indongo certainly didn’t expect such an opportunity to arise so soon after Terence Crawford wiped him out.

The Namibia native lost his two junior welterweight titles via third-round knockout in March, and afterward, Indongo latched on with promoter Lou DiBella in January.

Now, one fighter’s misfortune is Indongo’s gain. Viktor Postol suffered a hand injury and was forced to withdraw from his scheduled March 9 fight against fast-rising 140-pounder Regis Prograis, paving the way for Indongo to land the fight.

The Showtime telecast will now feature Prograis and Indongo clashing in the main event, and the former champion figures to provide a stern challenge for the untested upstart all the same.

“I’m very excited to fight Regis Prograis on March 9,” said Indongo (22-1, 11 knockouts). “This is a great opportunity for me toward becoming a world champion again. I know how good Prograis is, but come March 9, I’ll be victorious.”

The 35-year-old was a relative unknown before he traveled to Russia and upset Eduard Troyanovsky in December 2016 to win a 140-pound title. All Indongo did for an encore was trek to another opponent’s backyard and lift another title, this time with a wide-points victory over Ricky Burns in Scotland.

THE RING’s No. 5 junior welterweight, Indongo was no match for Crawford, but there’s no shame in losing to such an elite talent. He’s ready to prove he’s still a world-class fighter, and beating Prograis would accomplish just that.

“While it’s unfortunate that Viktor Postol suffered this training injury, we’re thrilled that Julius Indongo jumped right at the opportunity to face Regis Prograis for the interim WBC title,” said DiBella. “Regis wanted to prove himself against the best, and he will still be afforded that opportunity when he meets former champion Indongo in what promises to be a sensational clash of styles.”

Prograis (20-0, 17 KOs), too, is promoted by DiBella, and there’s a lot of intrigue building around the New Orleans native. The 29-year-old possesses great power and upper-body movement, and Postol stood as a quantum leap in competition.

The Ukrainian shined with a pair of knockouts on HBO: a highlight-reel eraser of Selcuk Aydin and then a victory over Lucas Matthysse to win a title.

Postol, too, couldn’t compete with Crawford, losing by decision. And there doesn’t figure to be much drop-off between Postol and Indongo.

Both men are capable former champions looking to rejuvenate their careers, but this time, it’s Indongo who is up at the plate.