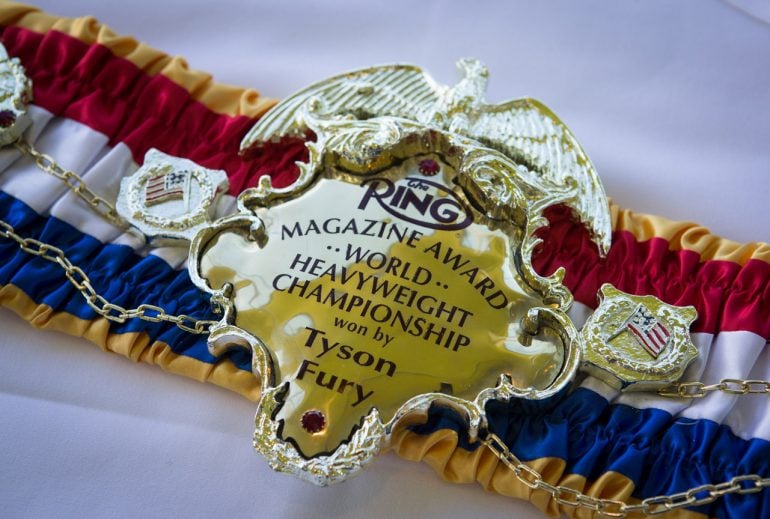 THE RING heavyweight championship belt, which was first awarded to Jack Dempsey in 1922 and was most recently held by Tyson Fury, is now vacant.
01
Feb
by The Ring

Tyson Fury captured the prestigious belt in November 2015 by winning a one-sided 12-round unanimous decision over long-reigning champion Wladimir Klitschko in Dusseldorf, Germany.

However, there have been a variety of obstacles which prevented the unbeaten Englishman from defending the championship over the past 26 months. Among them was the ill-fated Klitschko rematch, Fury’s mental health issues, a UKAD investigation and the revocation of his British boxing license.

With all these issues now cleared, THE RING set a deadline (January 31) for Fury to reveal an opponent. However, no such announcement has been made by the fighter’s promoter, hence the decision to remove Fury as champion. Fury will also be removed from THE RING heavyweight rankings for the time being.

We at THE RING would like to make it clear that this decision had not been taken lightly. THE RING championship belt is the closest representation to a lineal champion in the sport today, and Tyson Fury was extremely proud to be part of our heavyweight history.

We deeply regret separating from the lineal championship and we would hope that fans appreciate our reasons for giving Tyson every opportunity over the past two years. We wish our former champion the very best for the future and we will be happy to re-rank him when appropriate.

For the record, the vacant RING heavyweight championship will not be on the line in the IBF, WBA and WBO title unification bout between Anthony Joshua and Joseph Parker, which takes place in Cardiff, Wales, on March 31. Joshua and Parker are rated No. 1 and No. 3 by THE RING respectively.

There have been occasions when a vacant RING championship has been contested between No. 1- and No. 3-rated contenders. However, after careful consideration, we do not feel Joshua-Parker qualifies. At this time, THE RING ratings panel unanimously believe that Deontay Wilder is the second-best heavyweight in the world on merit.